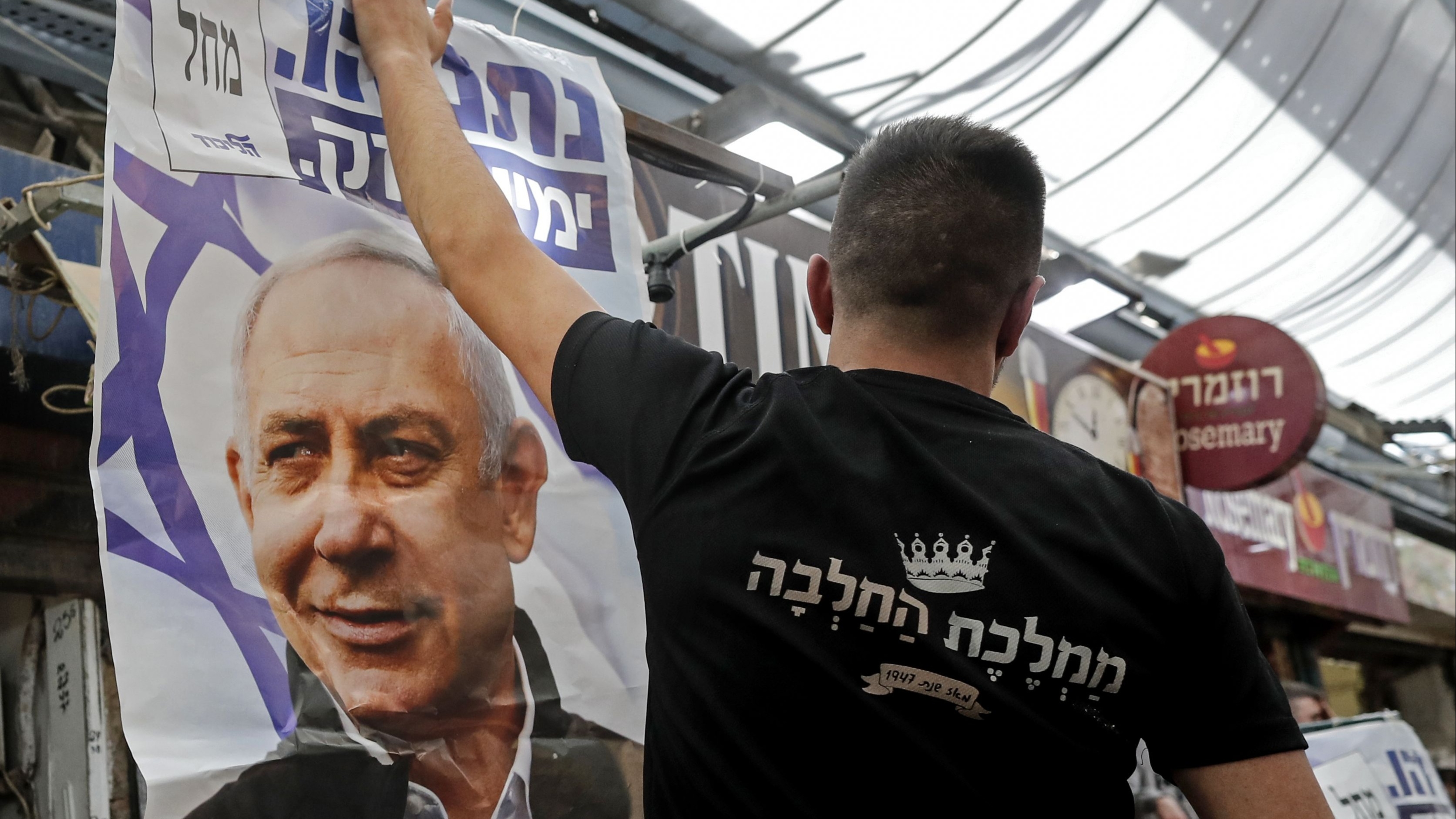 TO BIBI OR NOT TO BIBI

I know him, but I don’t know him know him, you know?

Totally. Netanyahu was prime minister in the late ’90s, and came back to the job in 2009. Now he’s running for a fifth term. Many say that he’s moved the country towards a more right-wing, nationalist agenda (see: this and this). If he wins – and stays in power until later this year – he’ll become Israel’s longest-serving PM. His pitch: the economy is strong, he’s kept Israel safe while tensions in the region have increased, and he’s tight with President Trump.

Got it. Who’s he up against?

Benny Gantz. He’s a former military chief and competes with Netanyahu’s national security experience on paper. Netanyahu has pegged him as a weak leftist. Gantz is Netanyahu’s biggest challenge in years. His pitch: he has a lot of military experience, he can unite the country, and he’d be a fresh face in the PM office.

Cool. What are the issues at play?

Scandals…as in Netanyahu’s got some corruption allegations looming over his candidacy, specifically around bribery and fraud. He denies the allegations, but the country’s attorney general says he plans to indict him anyway. If indicted, he wouldn’t legally have to resign. But he could get pushed out by parliament…or the public.

National security…as in Netanyahu’s been able to keep neighboring enemies at bay (like Iran). But recent tensions with Hamas – the Islamist group that runs Gaza and is considered a terrorist group by a number of countries – are in the spotlight. Netanyahu’s critics say he hasn’t cracked down enough on the group.

Territory…as in Netanyahu recently said that if he wins, he’ll extend Israeli sovereignty over the West Bank. Making it a major campaign issue since Palestinians also claim it as their own in the hopes of it becoming part of a future state. Some think this is just a ploy to win over voters. Others think this is Netanyahu getting on board with the right-wing that wants to annex the whole territory and avoid a two-state solution. (Meanwhile, Gantz has sent mixed messages.) Also important to note: Netanyahu might be feeling emboldened after the US recognized Israel’s sovereignty over the Golan Heights.

K but who is going to win?

In the last election, Netanyahu won by a landslide. This year, the race is closer than expected. We could get results as early as tomorrow. Voters are also choosing who makes up the country’s parliament – and what parties will likely have to work together to form a coalition government.

This election is considered a referendum on Netanyahu. But it’s also a decision on who should lead the country’s diplomatic efforts on the world stage: from the relationship with the US, to the Israeli-Palestinian conflict, to Israel’s role in the Middle East.

What to say when you’re in a spring cleaning mood…

So is President Trump. Yesterday, the White House confirmed Secret Service Director Randolph “Tex” Alles is leaving his job. This comes after both Homeland Security Secretary Kirstjen Nielsen resigned and Trump withdrew his nominee for ICE director. And it’s expected that the head of Citizenship and Immigration Services and the DHS’s general counsel will be leaving soon as well. Guess they didn’t spark joy. This is part of an effort to purge the country’s immigration and security leadership as the president pushes for tougher border security. Speaking of immigration, a judge blocked the Trump admin’s policy of returning asylum seekersto Mexico. Last year, the Trump admin announced that people seeking asylum would have to wait in Mexico while their cases play out in the courts – which could take months or years. Earlier this year, the admin started implementing the policy. Advocacy groups and some migrants sued. Yesterday, a judge said the policy doesn’t offer migrants the necessary protections. The ruling will not go into effect until Friday, giving the admin time to appeal.

The Virginia Cavaliers are the talk of college basketball. Last night, no. 1 Virginia managed to hold off no. 3 Texas Tech 85-77 in overtime in the NCAA men’s basketball national championship game. An epic comeback, considering last year they became the only no. 1 seedin the men’s tournament ever to lose to a no. 16 seed. Now, thanks to guards De’Andre Hunter and Kyle Guy, the Cavaliers have their first national title in basketball. Coach Tony Bennett had his dad there to enjoy his “One Shining Moment.”

What to say when you hear Chloe Sullivan pleaded guilty…

Lynette Scavo is saying ‘what she said.’ Yesterday, actress Felicity Huffman and 13 other people agreed to plead guilty in the college admissions scandal. They’re among 50 accused of doing shady sh*t like cheating college entrance exams and paying bribes to get their kids into elite colleges. As part of a plea deal, prosecutors agreed to recommend a prison term at the “low end” – which means Huffman may serve a max of 10 months in prison. Because, of course.

Are there any restrictions? The Trump admin is scrapping a deal that would have made it easier for Cuban baseball players to join the MLB. Last year, the MLB and Cuba’s baseball league announced a deal that the US gov had to sign off on. But now the Trump admin is saying that the deal isn’t legal. Meaning Cubans wanting to play in the US will reportedly need to get special licenses from the US government, which might not be easy to get.

My mind is a black hole.