Daily Skimm: The Latest on a Vaccine, WHO Drama, and a Peachy Read 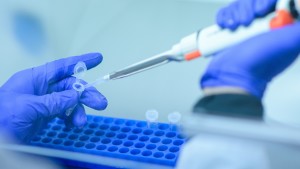 A Shot at Hope

Good news about a potential vaccine.

This one's from Moderna, a Massachusetts-based biotech company. Back in March, it launched the first human trial for a coronavirus vaccine. And yesterday, we got the early results: out of eight healthy volunteers injected with the experimental vaccine, all created neutralizing antibodies. Meaning, not only did they create antibodies, but those antibodies actually blocked the virus from replicating.

It is. But this was a Phase 1 trial (out of three). It's still not clear how the virus will do in a much bigger sample size. That's what happens next: Moderna will scale up the test to hundreds of people. Then move toward thousands, as soon as July. Ultimately, the goal is to figure out whether the vaccine is safe and effective to roll out to millions of people.

So when can we get it?

Not yet. A successful Phase 1 trial seems encouraging. But only about 1 in 10 drugs that make it past Phase 1 apparently get approved by the FDA. If it does get approval, Moderna says a vaccine could become available by early 2021.

Good thing there are at least 70 other potential vaccines in the works.

There's a lot that needs to happen before this vaccine – or others like it – can hit the shelves. But the fact that one passed this hurdle could be a promising first step to saving lives, reopening the economy, and getting our lives back to normal.

Skimm More: We explain how vaccines work and the challenges with developing one for COVID-19.

What, on the other hand, is not a vaccine...

Hydroxychloroquine. Yesterday, President Trump said he started taking the antimalarial drug earlier this month to try to prevent against COVID-19. He said he made the decision after talking with the White House doctor – but the announcement came despite last month's warning from the FDA against taking the drug preventatively. The agency said it could cause serious heart problems and shouldn't be used outside of a hospital setting.

Who's saying 'we'll look into it'…

The World Health Organization. Yesterday, during its 73rd annual World Health Assembly, the WHO said it would start an independent review of its own handling of the pandemic. The move came at the demand of 116 countries, including the US – which claims that the WHO's failures to gather info earlier on could have cost lives. The countries also called for an investigation into the origins of the virus, putting pressure on, you guessed it, China. Speaking of...

The auto industry. Yesterday, General Motors, Ford, and Fiat Chrysler began reopening their US factories after locking down in mid-March. But none of the companies are reportedly working at full capacity and things are looking a little different for workers. There will apparently be more cleaning in between shifts and plastic panels between workstations to keep employees further apart in some cases. There will also be regular temperature checks and more protective equipment.

Uber. Yesterday, the ride-hailing company said it would lay off another 3,000 workers and would be "closing or consolidating" around 45 offices. CEO Dara Khosrowshahi told employees about the move in an email, after the company saw an 80% drop in ride requests just last month. It's Uber's second round of layoffs this month, bringing the total cut to about 25% of its workforce (not including drivers).

...Oh and speaking of the economy, Federal Reserve Chair Jerome Powell said this downturn will be way shorter than during the Great Depression. He said that while unemployment numbers could get worse, the economy could recover by the end of next year.

When you're tired of the peach emoji...

There's a gentler option out there.