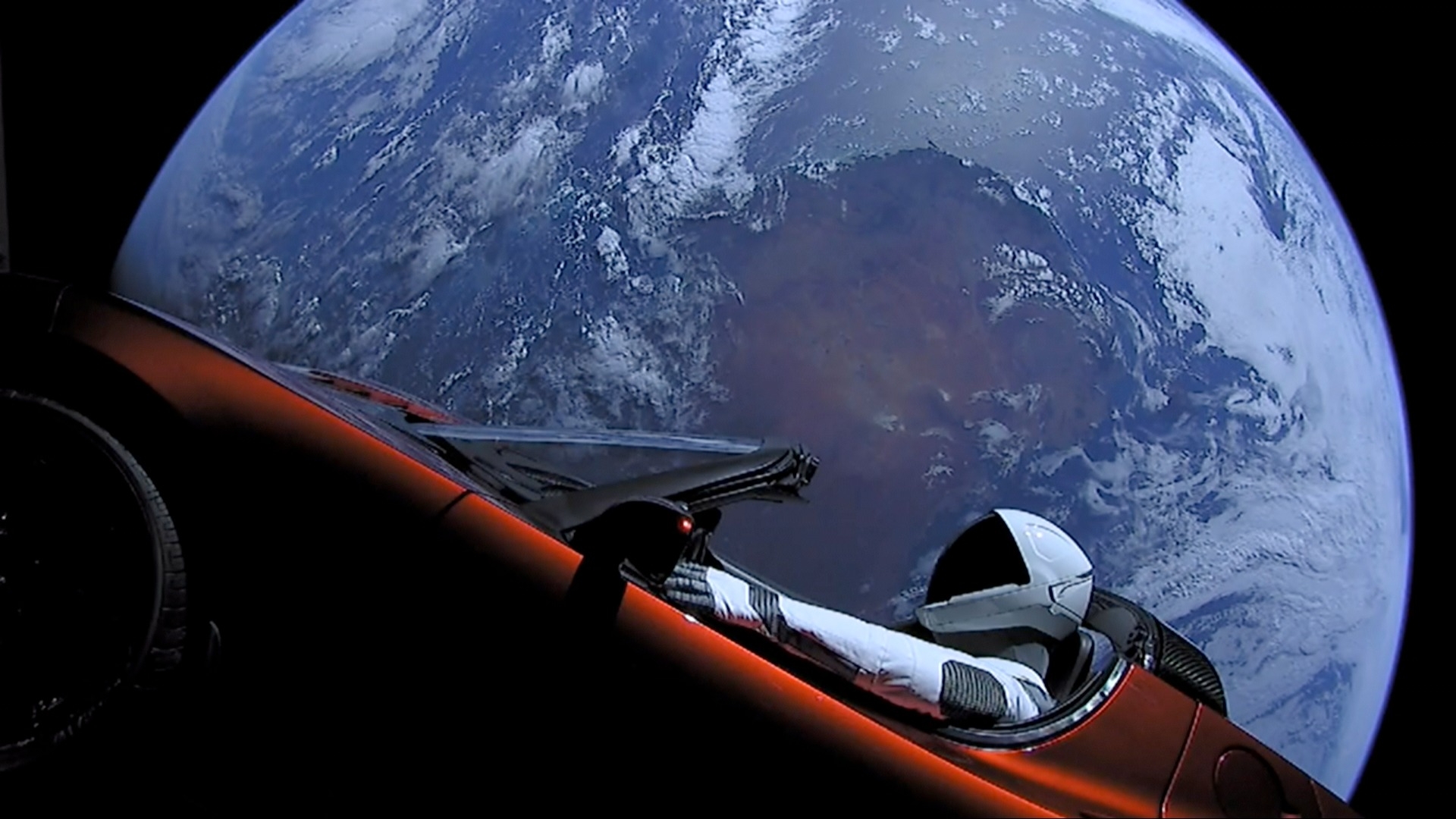 Today, humans are up and leaving Earth's atmosphere.

Can you blame them?

Of course not. In this case, it's the first US human spaceflight in nearly a decade. Back in 2011, NASA ended its space shuttle program because of safety and cost concerns. It's since been paying Russia's space agency to hitch rides to the International Space Station via Kazakhstan. But in recent years, Elon Musk's SpaceX company has been working with NASA to launch from the US again. If today goes as planned, two veteran astronauts (hi, Bob Behnken and Doug Hurley) will take off from Cape Canaveral, Florida, at 4:33pm ET. And SpaceX will be the first private company to send people into orbit.

Great, now meet the Falcon 9 rocket and Crew Dragon capsule. They're expected to boost Behnken and Hurley into space. And unlike the switches and dials in older shuttles, this capsule is 21st century modern with touchscreen and automation technology. Matching that tech are the astronauts' custom-made spacesuits. No wardrobe faux pas here.

It all sounds stellar. What's the mission?

It's a final flight test. Meaning, the astronauts will evaluate the spacecraft's performance and carry out research and other tasks once they reach the ISS. The goal is to figure out if SpaceX can get the green light as an official space transportation system in the future after years of tests that involved snafus (see: this and this). There's no official timeline on how long the mission will last, but the astronauts could be watching Earth from above for at least a month.

How's this happening during a pandemic?

With extra precautions. Before heading to space, the astronauts reportedly had to quarantine and get tested twice for COVID-19. And NASA implemented social distancing and temperature checks at Mission Control. It's also urging everyone to watch on tv or stream online and not gather at the Kennedy Space Center. The live stream will start at around 12pm ET so get the popcorn ready, and cross your fingers that bad weather won't delay the launch.

Today's mission, if successful, could introduce a new era of space travel that's potentially cheaper and expands access to more people. And with private companies taking some of the reins, NASA would be able to focus on space explorations to the Moon and Mars.

George Floyd. Earlier this week, Floyd – an unarmed black man – died at a hospital after a Minneapolis police officer pinned him to the ground for at least seven minutes during an arrest. Police said they responded to a report of a "forgery in progress" at a grocery store and that Floyd resisted arrest. Cell phone video shows an officer pressing his knee on Floyd's neck, who's heard repeatedly saying, "I can't breathe." State officials have launched a criminal investigation. The FBI is looking into potential civil rights violations. Meanwhile, Minneapolis Mayor Jacob Frey (D) said that being black in America should "not be a death sentence" and announced that the four officers involved had been fired.

What's saying 'fact check yourself before you fact wreck yourself'...

Twitter. Yesterday, the Little Blue Bird applied community policies to President Trump for the first time ever. For years, critics called Twitter out for not applying its anti-harassment and anti-violence policies to tweets from POTUS. To that, Twitter has replied 'yeah but he's a world leader.' It also may not be in the Bird's best interest to alienate one of its most followed people. Now, it's saying 'never mind.' It decided to fact-check Trump for two tweets on mail-in voting, calling them "potentially misleading" for correlating voting by mail with voter fraud. Now, Trump is accusing the company of "stifling free speech" and "interfering" in the 2020 election after conservatives had already been accusing the company of bias.

Where LGBTQ+ couples are celebrating…

Costa Rica. Yesterday, it became the first Central American country to legalize same-sex marriage. The move came after Costa Rica's supreme court ruled in 2018 that the country's ban on same-sex marriage was unconstitutional. And gave the legislature 18 months to change the law or it would take effect automatically – which is what happened. Costa Rica's president praised the change, reportedly saying the country was celebrating "freedom, equality, and democratic institutions." And same-sex couples held wedding ceremonies as soon as the rule went into effect.

What's preparing the song of the summer...

Cicadas. Scientists say millions of these insects will emerge from the ground in the coming months – for the first time in 17 years. They're harmless to humans, but can damage grape vines and fruit trees. And their reported "alien-like wail" might disturb your Zoom calls or online Zumba classes.

When you've (HBO) Max-ed out of Harry Potter…