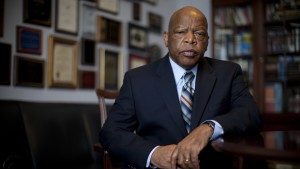 Rep. John Lewis (D-GA) and Rev. CT Vivian. On Friday, Lewis died at the age of 80 after a battle with cancer. A civil rights legend, Lewis was the last surviving speaker from the 1963 March on Washington, which he helped organize. He led lunch counter sit-ins as a founding member of SNCC and was one of the original 13 Freedom Riders. In 1965, he led the famous march from Selma to Montgomery to demand equal voting rights for Black Americans – and was brutally beaten by Alabama state troopers. Images of the violence protesters faced that day – which became known as Bloody Sunday – helped win public support for the Voting Rights Act of 1965. Lewis was arrested more than 40 times in his pursuit of civil rights. But his fight continued into his service in Congress.

Lewis was a leading advocate for voting rights. Known as "the conscience of the Congress," he continued his nonviolent activism with multiple sit-ins, on issues ranging from gun control to health care to immigration reform. And he urged people to get involved in "good trouble" – part of the title of a recent documentary about him. His passing came the same day as Rev. CT Vivian's.

Vivian was also a Freedom Rider – and a member of Rev. Martin Luther King Jr's group of advisers. He helped King run the Southern Christian Leadership Conference, which organized sit-ins and civil rights marches across the South. In 1965, Vivian led a group of people to register to vote in Selma, Alabama, where he was punched on camera by a segregationist sheriff. Both he and Lewis were recipients of Presidential Medals of Freedom – the country's highest civilian honor.

Democrats are pushing to honor Lewis by passing legislation to restore parts of the Voting Rights Act that were struck down by the Supreme Court in 2013. Others want to rename the bridge in Selma after him. These men helped pave the way for some of the most monumental achievements in our country, but the work they started is far from over. As Lewis said in one of his final interviews – praising this year's protests – "we have come too far and made too much progress to stop now.

Where things are getting heated...

Oregon. The state is clashing with the federal government over the presence of federal agents in Portland. For over 50 days, protesters have turned out in the city to protest police brutality and racism. The Trump administration has sent federal agents to the area, saying it's meant to help the city get protests under control and protect federal property. While most protesters remained peaceful, others set fire to a police union building and reportedly threw cans at officers. But federal authorities are accused of responding with tear gas, batons, and rubber bullets. As tensions escalated, they apparently used unmarked vans to detain protesters. Now, the state's AG is suing the admin, accusing it of taking people into custody without explanation. And the mayor wants agents out ASAP, accusing the admin of "escalating the situation." But federal officials reportedly said they're staying put.

New Jersey. Yesterday, the 20-year-old son of US District Judge Esther Salas died after a shooting inside her North Brunswick home. Salas's husband was also shot and is in critical condition. Authorities said the gunman appeared to be wearing a FedEx uniform and fled after the shooting. It's unclear whether Salas – who was unharmed in the attack – was targeted. The FBI, US Marshals, and local authorities are searching for the suspect. New Jersey Gov. Phil Murphy (D) called the shooting a "senseless act."

This footage. Yesterday, China's ambassador to the UK was asked about a drone video allegedly showing prisoners from Xinjiang shackled, blindfolded, and being led to trains. The region is where an estimated 1 million Uighurs – a Muslim minority group in China – have been detained. The ambassador denied knowing where the video came from. And said "Uighur people enjoy peaceful, harmonious coexistence" with others. But the UK's foreign secretary said it's clear there are "gross, egregious human rights abuses going on" in Xinjiang.

What some Americans need to plan around...

This expiration date. This week is set to be the last one for more than 25 million unemployed Americans to receive an extra $600 in federal unemployment benefits. Congress is working on another coronavirus relief package, but it's unclear what benefits it'll include. This comes as COVID-19 related deaths in the US have topped 140,000

Who's got a strong line of defense…

The Pentagon. Last week, it banned the Confederate flag at military bases around the world. But it made the change without mentioning the word "Confederate." Officials said it was to avoid upsetting President Trump, who has said the flag represents freedom of speech

What'll have you practicing the handshake...