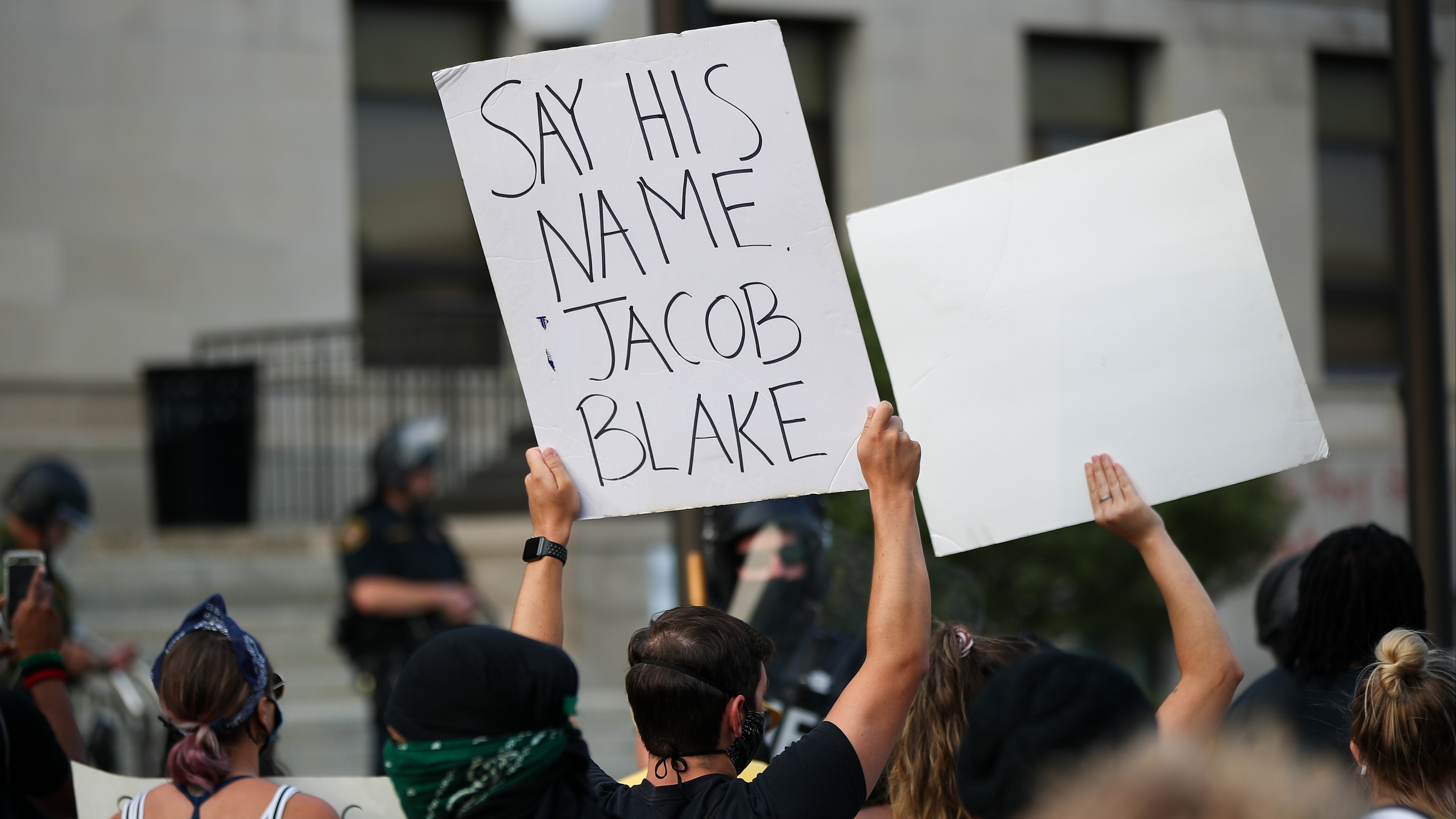 Wisconsin's governor is calling for change after the shooting of Jacob Blake.

As a reminder, cellphone video was released that showed police in Kenosha, WI, shooting Blake in the back multiple times on Sunday. Police say they were responding to a domestic incident, but haven't provided any other details on what happened. Witnesses say Blake was trying to break up a fight. Blake's currently hospitalized and his family says he's paralyzed from the waist down. The family lawyer said it would "take a miracle" for him to ever walk again, and that three of Blake's kids witnessed their dad get shot.

Are the officers being charged?

TBD. They're currently on leave while the state Department of Justice investigates the shooting. If it sounds familiar, it's because it is. And many Americans are fed up. Including Blake's sister, who spoke out and said she had been "watching police murder people" that look like her for years. And demanded change. Something Gov. Tony Evers (D-WI) said needs to happen on the state level.

He's ordered a special legislative session starting Monday to consider a package of police reform bills. They'd ban chokeholds, end no-knock warrants, and require an annual statewide report on police use of force, among other things. The Republican-led legislature is saying 'let's not do anything hasty.' But they're going to feel some pressure.

Despite a curfew and the arrival of the National Guard, protests in Kenosha are ongoing, but some have turned violent. Three people were shot at the protests last night and two were killed, according to authorities. Elsewhere, protesters from Minneapolis, New York, and Washington, DC have joined in the calls for justice for Blake. Celebrities like LeBron James have spoken out. The Detroit Lions canceled practice to talk about police violence. And the Toronto Raptors are reportedly considering boycotting an NBA playoff game.

Black lives matter. There shouldn't need to be protests to get that point across. But as long as Black Americans continue to be disproportionately shot and killed by police, Americans are continuing to fight for change.

The Republican National Convention. The RNC's second night was held around a theme of the "Land of Opportunity" as we heard from several of President Trump's family members. His children, Tiffany and Eric, took the stage to support their father's fight for freedom and for those "who embody the American Spirit." The president himself appeared on screen as he held a naturalization ceremony at the White House, praising legal immigration. First lady Melania Trump spoke about her own immigration story, thanked frontline workers, and offered her condolences for those affected by COVID-19. She added that "you always know" what her husband's thinking, and that his leadership is needed "now more than ever." And Secretary of State Mike Pompeo – whose speech, recorded in Jerusalem, may violate State Dept guidance – commended Trump's achievements in foreign policy and in keeping Americans "safe and our freedoms intact."

What may have to play defense…

The NFL. Yesterday, two Black former NFL players sued the league alleging discrimination in the 2013 concussion settlement. Reminder: the NFL reached a $765 million deal with thousands of former players who have brain injuries stemming from football (like: ALS, dementia, Parkinson's disease). But Kevin Henry and Najeh Davenport's lawyers claim that the league's doctors use different standards for dementia tests for Black players vs white players. And that the NFL "explicitly and deliberately discriminates on the basis of race" since this process assumes Black players have lower cognitive functioning than white players. An NFL spokesman called the lawsuit "entirely misguided."

What's saying 'welcome to the club'...

The Dow. Quick market talk: the Dow Jones Industrial Average is an index made up of 30 major company stocks. Investors often look at its performance as a benchmark for how the market's doing overall. And thanks to Apple, it's getting a makeover. Apple recently announced it's enacting a four-to-one stock split, which would have decreased the tech sector's representation in the Dow. To make up for that, Exxon Mobil, Pfizer, and Raytheon Technologies are getting the boot. And Salesforce, Amgen, and Honeywell are entering the big leagues. It's the largest shakeup since 2013 and is set to take effect August 31.

Skimm More: Stocks have been on a wild ride this year. Here's how to know when to say 'I'm out.' And when to stay calm and invest on.

What's bringing us some good news…

Africa. Yesterday, the continent was declared 'wild poliovirus free' – a historic milestone that's been decades in the making. Wild polio paralyzed an estimated 75,000 children in Africa each year in the '90s, but the last case was reported in Nigeria four years ago. But the fight isn't officially over yet. Vaccine-derived polio – when virus particles in some vaccines mutate to cause paralysis – still poses a threat in several African countries but is typically pretty rare.

Why we're ready for fall...