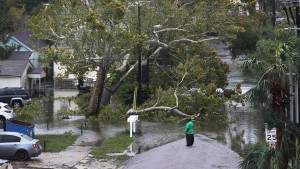 First, a quick science lesson: Hurricanes are storms that form near the equator and gain strength by feeding off of warm water and moist air over the Atlantic Ocean or eastern Pacific Ocean in the tropics. Add wind to the equation and that tropical storm quickly becomes a tropical cyclone aka a hurricane. Now, it's no secret that our planet is getting warmer thanks to climate change. And as a result, scientists say hurricanes are getting stronger and more dangerous.

Currently, the US is on track for its worst hurricane season on record, with 20 named storms this year alone. So many, that meteorologists are running out of names – and hurricane season could still go on for months. Yesterday, Hurricane Sally made landfall in the US as a Category 2 storm with 105 mph winds. It left widespread flooding in parts of Alabama and Florida – which also had storm surges of over five feet. At least one person was killed, hundreds have been rescued from flooded areas, and more than half a million people lost power. President Trump said he's monitoring the situation and has approved federal help.

With wildfires on the West Coast and hurricanes along the Gulf Coast, climate change is intensifying natural disasters across the US. And scientists say things will only get worse – unless everyone (including our leaders) does their part to try to minimize its effects.

Venezuela. Yesterday, United Nations investigators accused Venezuelan President Nicolás Maduro and several top government officials of committing crimes against humanity. In a 411-page report, the UN reviewed nearly 3,000 cases going back to 2014, ranging from killings to torture to sexual violence. And said that these crimes – which experts say were done against opposition leaders, criminals, and ordinary citizens – were committed by intel agencies and security forces with "the knowledge or direct support" of gov officials. The investigators said the International Criminal Court should consider prosecutions. The Venezuelan gov has yet to officially respond. But the country's foreign minister tweeted that the report was filled with lies.

The CDC. Yesterday, the health agency outlined its plan to make COVID-19 vaccines free to all Americans. Reminder: Over 130 potential coronavirus vaccines are in the works worldwide. The CDC says it expects to distribute limited quantities of a vaccine as early as November to those who need it most. That means health care workers and older people. And that it might take six to nine months after that for everyone else to get vaccinated – allowing "regular life" to make a comeback in late Q2 or Q3 of 2021. But, in an interesting turn of events, the CDC's director said masks may be better at preventing COVID-19 than vaccines – something President Trump wasn't too happy to hear.

...Oh and speaking of plans, the Federal Reserve announced it's leaving interest rates near zero to help the US economy recover from the pandemic...through at least 2023.

Psst...here's what super-low interest rates mean for your debt, savings, and big plans.

Who's in more trouble...

Boeing. Yesterday, a congressional report blamed the plane manufacturer and the FAA for "repeated and serious failures" that led to two deadly crashes. Reminder: Last year, Boeing grounded its 737 Max jets after deadly crashes in Indonesia and Ethiopia killed a total of 346 people. And they may have to stay out of the skies a bit longer. The report echoed previous findings in saying the plane crashes were a "horrific culmination" of design flaws, mismanagement, and bad gov oversight. And lawmakers are calling for reforms so that such a tragedy "never happens again." Boeing said it cooperated with the investigation and is working on "rebuilding trust."

The Big Ten. Yesterday, the collegiate sports conference announced it's getting ready to return to the gridiron next month. It's running back its decision to postpone until the spring following pressure from President Trump, coaches, and players. But fans will have to watch the blitz from afar since the stadiums won't be open to the public.

Barbados. The Caribbean island nation plans to remove Queen Elizabeth II as its head of state next year. Barbados Governor-General Sandra Mason said "the time has come to fully leave our colonial past behind." It would be the first time in nearly 30 years that a Commonwealth member has cut ties with the monarchy.

While this finsta sparks a challenge…

This TikTok's schooling us.