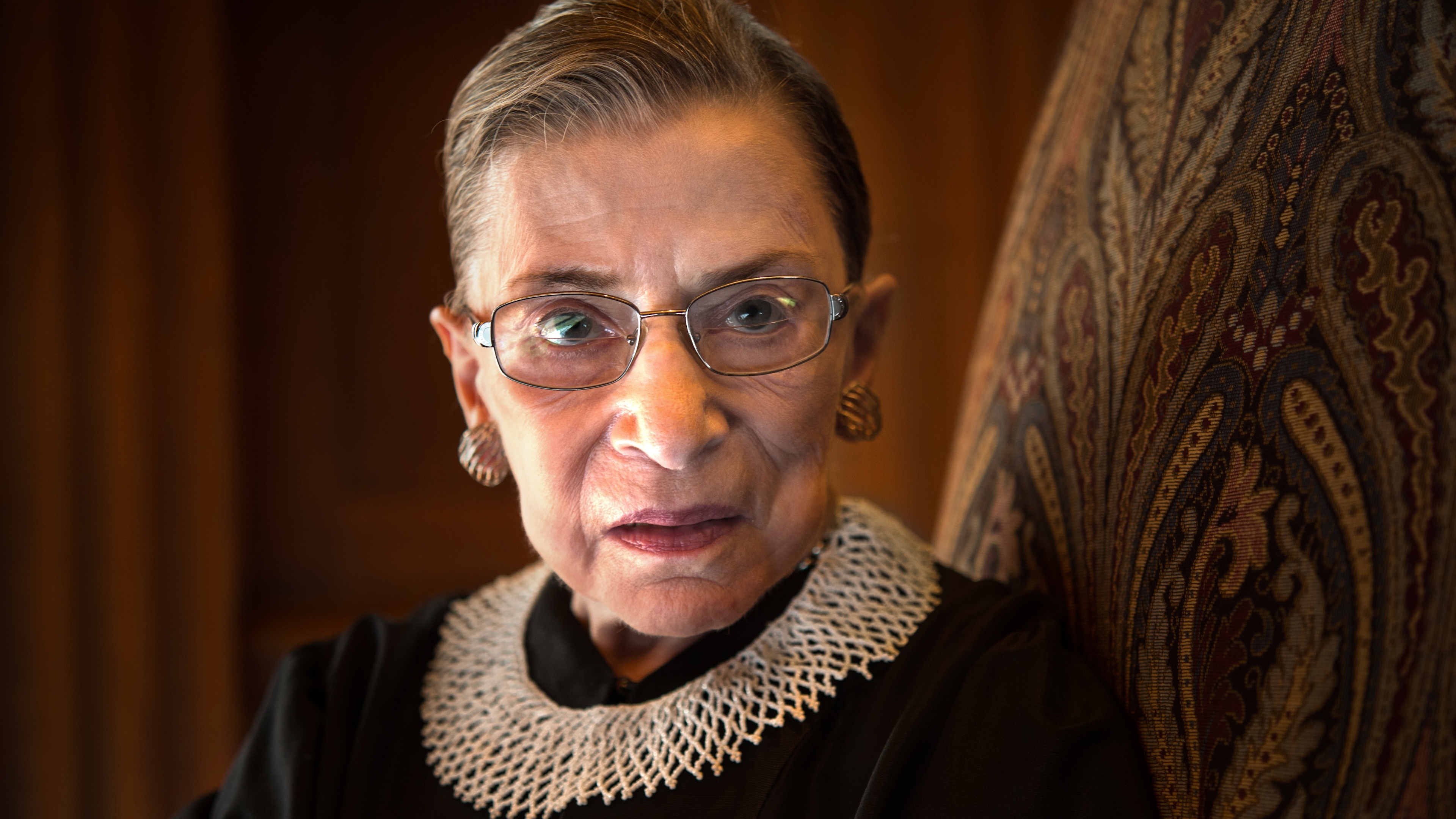 On Friday, the iconic justice died at the age of 87 of complications from metastatic pancreatic cancer. While she got headlines in recent years for her notorious nickname, her fancy collars, and her inspiring workout videos, RBG spent her career as a fierce defender of gender equality. Born in Brooklyn, NY, Joan Ruth Bader met her husband Marty Ginsburg at Cornell University. She graduated top of her class from Columbia Law School years later but struggled to find a job at a law firm – not only because she was a woman, but also because she was a mother and Jewish. And this was the '60s.

How times have changed…

Actually, you can thank RBG for some of those changes. She founded the ACLU's Women's Rights Project, where she won several landmark cases before the Supreme Court on gender equality. Her work helped make changes like giving women the right to open a bank account, have credit cards, and a mortgage without a man's signature. In 1993, Ginsburg – nominated by President Bill Clinton – became the second woman appointed to the Supreme Court. She served on the bench for nearly 30 years, fostering friendships across the political spectrum yet tirelessly working as part of the court's liberal wing.

She championed women's rights against discrimination on the basis of sex (see: United States v. Virginia and Ledbetter v. Goodyear Tire & Rubber Co). She pushed for everyone's right to vote (see: Shelby County v. Holder). She supported the rights of those with disabilities (see: Olmstead v. LC), the right to access health care, including birth control (see: Burwell v. Hobby Lobby Stores). She defended a woman's right to obtain an abortion (see: her confirmation hearing). And she voted in favor of same-sex marriage (see: Obergefell v. Hodges). Chief Justice John Roberts remembered her as someone of "historic stature" and "a tireless and resolute champion of justice." Now, her death leaves a seat open on the Supreme Court.

What's happening with that?

President Trump – who's already appointed two conservative justices (Gorsuch, Kavanaugh) during his presidency – said he'll nominate a woman to replace RBG this week. And Senate Majority Leader Mitch McConnell (R-KY) promised the Senate would move forward with a vote on his nominee. However, many are eyeing the election countdown clock and saying 'something's not right.' If you remember, back in 2016, Justice Antonin Scalia died with less than 11 months left in President Obama's second term. He had nominated Judge Merrick Garland to replace Scalia, but the Republican-led Senate said 'let's hold off' since the 2016 election was right around the corner.

And now another election is right around the corner.

Exactly. In 43 days to be exact. And Democrats are not happy the Republicans want to move fast...since they didn't in 2016. Trump's 2020 rival Joe Biden pleaded with senators to follow their consciences and not push forward with the vote. So far, two Republicans – Sens. Susan Collins (R-ME) and Lisa Murkowski (R-AK) – have said they don't support confirming a new justice before the election. But since the Republicans hold the Senate majority (53-47), Democrats would need at least four Republicans to side with them to stop a confirmation from happening before the election. And regardless of who wins in November, the Republicans would still have time after the election to potentially hold a vote on Trump's nominee.

Ruth Bader Ginsburg spent her entire career breaking down barriers for women. This weekend, thousands of people gathered outside the Supreme Court to pay their respects to the justice, whose "most fervent wish" was to not be replaced until a new president was chosen. That may not happen. And since her successor could rule on laws dealing with everything from abortion to health care to gun control and immigration, liberals and conservatives are gearing up for another big fight – with just six weeks until Election Day.

TikTok. Over the weekend, the Chinese video-sharing app avoided a ban in the US by getting the Trump admin's "blessing" on a deal. Reminder: President Trump threatened to ban TikTok because of national security concerns. And said it needed to find a buyer (fast) for its US operations to keep going. Enter: Oracle and Walmart, which tag-teamed and came through with a Hail Mary for Gen Z-ers (and quarantiners) hours before yesterday's deadline. Now, both companies will own a combined 20% stake of the new TikTok Global, which will be headquartered in the US. But the deal still needs to be reviewed and approved by a Treasury Department panel.

...Oh and speaking of avoiding bans, a federal judge blocked the Trump admin's scheduled ban on the Chinese messaging app WeChat in the US, saying it was a violation of free speech.

The US. Over the weekend, the CDC (once again) reversed its COVID-19 testing guidelines. The health agency now says people "need a test" if they've been exposed to an infected person (think: being within six feet for at least 15 minutes). This comes as the country's nearing 200,000 COVID-19 deaths.

Russia. It's apparently struck preliminary deals to sell its COVID-19 vaccine – Sputnik V – to more than 10 countries including Brazil, Mexico, Saudi Arabia, and India. Officials say the vaccine could be distributed around the world as early as November, pending local regulatory approval. But health experts around the world are worried since the vaccine was approved before large clinical trials were finished – meaning it's not completely clear if it's safe and effective.

Where the show went on…

The Emmys. Yesterday, the 72nd annual awards show for your fave TV binges kicked off (virtually, of course). There was no red carpet but some stars still brought the glamour. Jimmy Kimmel hosted it from a nearly empty (hi, Jason Bateman) Staples Center while celebs joined from home. "Watchmen" won big – with star Regina King honoring Breonna Taylor. Zendaya made history. "Succession" was a success. And "Schitt's Creek" was 'simply the best.'

Who granted his own birthday wish...

Tadej Pogacar. The 21-year-old (now 22, HBD) is the youngest winner of the Tour de France since 1904 and the first Slovenian ever to win.

What's going to be dynamite…