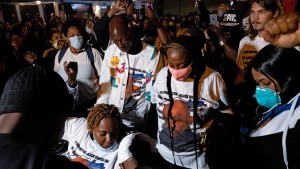 A Call for Help

Let's talk about the police response to mental health calls.

This past year has exacerbated calls for an end to police brutality and for the key changes that are necessary to make that happen. But two cases are showing police failing to appropriately respond to mental health calls – and the urgent need for reforms:

Angelo Quinto's...In December, the 30-year-old Navy veteran died in Antioch, CA, after police allegedly knelt on his back for about five minutes. Quinto's family said he had been suffering a mental health crisis when they called officers for help. But they claim police forcefully and physically restrained him without trying to understand his mental state. He started bleeding, lost consciousness, and was transferred to a local hospital where he died three days later. Quinto's cause of death hasn't been released, and the Contra Costa County DA is investigating. Last week, Quinto's family filed a wrongful death lawsuit. Authorities have yet to respond.

Daniel Prude's...In March, the 41-year-old Black man died in Rochester, NY, after police restrained him, covered his head with a "spit hood," and pinned him to the ground – one officer put his knee to his back. Prude's family had also said he was suffering a mental health crisis when they called officers for help. He lost consciousness and was sent to the hospital where he was taken off life support seven days later. His death was ruled a homicide. Police allegedly tried to delay the release of body cam footage. And documents showed officials tried to make Prude look like a suspect. Seven officers were suspended. The city's police chief, deputy chief, and entire command staff resigned. But yesterday, a grand jury decided not to indict any of the officers involved. A Prude family lawyer commented on the decision, saying "the system failed." Meanwhile, Rochester PD said the officers involved will remain on leave while an internal investigation takes place.

Unfortunately, these cases aren't rare. The Treatment Advocacy Center reported that people with mental illness were 16 times more likely to be killed during an encounter with police. And according to one study, nearly a quarter of Americans shot and killed by police since 2015 had a history of mental illness. That's more than 1,400 people. Officers are usually the first ones to respond to these calls – and may lack the proper training.

Last year, then-President Trump signed an executive order that encouraged police departments to work with social workers and mental health professionals through "co-responder programs." And on the campaign trail, then-candidate Joe Biden called for more federal funding to go toward mental health services. Eugene, OR, and San Francisco, CA, already have those programs in place. And New York City will follow in the spring. But there are calls for broader reforms, including defunding the police and allocating that money to social services like mental health resources.

Again and again, calls for help have turned deadly at the hands of police officers. And they are rarely held accountable for their actions. Advocates are calling for additional training. But only time will tell if elected officials respond to the urgent need for reform.

Whose case is also in the news...

Ahmaud Arbery's. Yesterday marked the one-year anniversary of the 25-year-old Black man's killing, which fueled racial justice protests. Arbery was jogging in a suburban neighborhood in Georgia when he was chased and shot by a former police officer and his son. A third man recorded everything. All three white men have maintained that they did nothing wrong and were charged with felony murder. Now, Arbery's mom, Wanda Cooper-Jones, filed a civil lawsuit, accusing the three men, law enforcement, and local prosecutors of reportedly "willfully and maliciously" conspiring to kill her son. And said "racial bias, animus, discrimination" led to a violation of Arbery's civil rights. Cooper's seeking $1 million in damages. An attorney for one of the men said the new lawsuit will still show he "acted within the law."

The Capitol riots. Yesterday, a joint Senate hearing focused on the security failures that led up to the Jan 6 attack. The violent siege left five people dead, democracy wounded, and lots of questions about how such an attack could happen. Law enforcement officials blamed a breakdown in communication and not receiving the right intel (read: FBI bulletin warning about an attack). Senators heard testimony from former Capitol Police chief Steven Sund, who said rioters "came prepared for war." And Capt. Carneysha Mendoza shared the dangers officers faced, saying she hasn't healed from chemical burns she suffered from "military-grade gas." The Senate plans to hold more hearings on the riots next week.

...Oh and speaking of the Senate, yesterday Linda Thomas-Greenfield got its approval to serve as US ambassador to the UN – becoming the second Black woman to hold the role.

Where there are developments…

Texas. Yesterday, five board members who oversaw Texas's power grid resigned. The Electric Reliability Council of Texas had been facing backlash after a winter storm left millions of Texans without power for days during some of the state's coldest temperatures. The council ordered rolling blackouts to try and preserve electricity throughout the state. But it led to skyrocketing electricity prices, and some customers were charged thousands of dollars for basics like heat. Now, the board members are acknowledging "the pain and suffering of Texans." Texas Gov. Greg Abbott (R) welcomed the resignations.

TV show production. Yesterday, a new report revealed that more women and people of color are saying 'lights, camera, action.' The 2019-2020 season (hi, quarantine binge-watching) saw a 5% increase in the number of directors of color. And the number of female directors grew 3% over the same time period and has more than doubled since the 2014-2015 season. But it's not all good reviews, Latino filmmakers and women of color are still vastly underrepresented in an industry that's dominated by white men. Let's flip the script.

Tiger Woods. Yesterday, the golf star suffered serious injuries after a rollover car crash near Los Angeles. Woods had to be extricated from the wreckage and was taken to the hospital for surgery to his right leg and ankle. A statement on Woods' Twitter account said he was "awake, responsive, and recovering" after surgery.

Others are melting over buttergate.