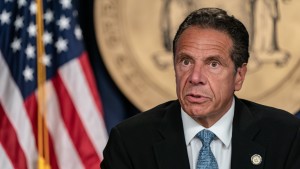 In December, Lindsey Boylan, a former Cuomo aide, accused the governor of sexual harassment. Last week, she wrote about it in a detailed Medium post. She said Cuomo harassed her on multiple occasions from 2016 to 2018, often commenting on her appearance and going out of his way to touch her lower back, arms, and legs. Boylan says she was told by her boss that Cuomo had a "crush" on her. She said he asked her to play strip poker on a gov plane, and that he once kissed her without her consent. And she is not alone.

Over the weekend, Charlotte Bennett also accused the governor of sexual harassment. She was an executive assistant and health policy adviser in Cuomo's admin at the height of New York's battle with COVID-19. Bennett said Cuomo asked her a bunch of questions about her personal life, including whether she had ever slept with older men. And that he told her he wanted a relationship with a woman in her 20s (she's 25). She also said that Cuomo had made it clear to her he was lonely amid the pandemic – comments she saw as hinting at a sexual relationship.

He denied the allegations, but said his "interactions may have been insensitive or too personal." And that his comments may have been "misinterpreted as unwanted flirtation." The three-term governor requested an independent review of the allegations against him. After much back and forth on who should lead the probe, NY Attorney General Letitia James (D) said her dept will take it from here. The White House said it would support the independent review. This all comes as Cuomo is already facing backlash about his admin underreporting nursing home deaths.

In the years since the #MeToo movement kicked off, Americans have witnessed more and more powerful officials get called out for their alleged behavior toward women (like former President Trump, Justice Brett Kavanaugh, and current President Biden). But it's always a coin toss how seriously the allegations will be taken...and whether there will be consequences.

This intel report. On Friday, it said Saudi Arabia's Crown Prince Mohammed bin Salman (MBS) approved the 2018 killing of Washington Post columnist Jamal Khashoggi. In response, the Biden admin issued visa restrictions against 76 Saudis – calling it the "Khashoggi Ban." But guess whose name wasn't on the list. Critics from across the aisle say the Biden admin's reaction barely registers as a slap on the wrist. And that the US should have held MBS personally accountable.

Where concerning things are happening...

Myanmar. Yesterday, at least 18 protesters were killed and dozens injured in clashes with police. It's the deadliest day since the military took power last month – arresting civilian leader Aung San Suu Kyi and declaring a state of emergency. Demonstrations have been ongoing throughout the month as protesters called for Suu Kyi's release. Now, the UN is saying that the police deployed water cannons and tear gas, and shot rubber bullets against peaceful protesters. The UN condemned the "escalating violence" and called on the military to stop using force against the demonstrators. Today, protesters returned to protest despite yesterday's violence.

Johnson & Johnson. Over the weekend, the FDA gave emergency approval to the J&J vaccine, making it the third available COVID-19 vaccine to Americans. Unlike Pfizer's and Moderna's vaccine, it only requires one dose and doesn't need to be kept in freezing temps, making it easier to ship and store. The vaccine is 85% effective against severe COVID-19 symptoms 28 days after vaccination. The gov's hoping to ship 4 million doses this week. And Dr. Anthony Fauci is saying 'don't stress' – he's encouraging Americans to get whatever vaccine is available to them.

What could have been an email...

The Golden Globes. Last night, many of Hollywood's biggest names red-carpeted from home – kids, dogs, and WFH attire included. "The Crown" got all the crowns. Anya Taylor-Joy said 'checkmate.' And Sacha Baron Cohen wa wa wee won the funny awards. Chadwick Boseman's wife said that she doesn't "have his words" – but hers were perfect. And Chloé Zhao is the award show's second female best director, ever. But the awards were not without controversy. This year, it came out that the judges have no Black members. Jane Fonda isn't having it. And someone needed to unmute Daniel Kaluuya.

Who's walking Chris Harrison out...