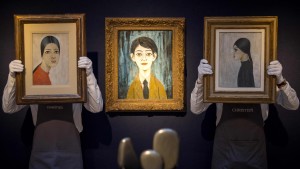 NFTs are a BFD.

NFTs. They stand for non-fungible (read: irreplaceable) tokens. They're kind of like unique deeds or trading cards...but make 'em digital. Normally when an artist sells a painting, people buy the physical thing. But in a world of GIFs, JPGs, and MP3s, collectors want to be able to say 'I own that' about art that's circulating in the digital space for free. Enter: NFTs.

Expensive bragging rights. NFTs have unique identifiers to track who sold and bought anything in the digital world – from Jack Dorsey's first tweet (on track to rake in $2.5 million) to a Kings of Leon album. How do you own a tweet, you might ask? You don't. You own the idea of owning the tweet. Eccentric? Sure. In any case, whoever pays up gets a token – encoded with fancy crypto magic – that proves they did it. Quite the flex.

Why am I hearing about it now?

Yesterday, an NFT by an artist known as Beeple sold for $69 million – putting Beeps among "the top three most valuable living artists." It surpassed bids for work by artists like Frida Kahlo and Salvador Dalí. And was the first time auction house Christie's ever sold a completely digital NFT. Another first for Christie's: accepting Ethereum – a cryptocurrency. The auction house reportedly says it would be open to selling tokens like this in the future – but that it won't quit its day job of selling actual, physical paintings.

Idk how to feel about this.

It's a lot. But there's more to the story than just bragging rights: NFTs can provide musicians and artists with a new source of revenue. For the buyer, NFTs can be a form of investment that could earn some profits. But keep in mind: the market is still evolving. And investing in NFTs isn't exactly a tried and true strategy.

The digital age for buying and selling content is taking a new direction. Now, some artists and musicians are cashing in on the opportunities cryptocurrencies are creating. And people with lots of money are finding new ways to spend it. And that's the NFTea.

We sat down with former President Obama to talk about his memoir "A Promised Land" – which covers his childhood through his first term in office. He gave us insight on:

Find out that and more here.

Plus, we got his thoughts on the state of race relations today and how he thinks the country can achieve racial equality. Listen to our podcast "Skimm This" for his answer.

Women. In the UK, women are speaking out about the sexual assault and violence they've experienced. The calls for change stem from the disappearance of 33-year-old Sarah Everard – who went missing last week in south London after walking home from a friend's house. Earlier this week, authorities found human remains in the woodlands of Kent. A Metropolitan police officer was arrested as a suspect of kidnapping and murder. Met Police Commissioner Cressida Dick said she was "utterly appalled" by the news. Everard's family shared a tribute to the woman who "brought so much joy" to their lives. Now, women are highlighting the dangers we face every day – even when doing mundane tasks – and the extreme precautions we must take to stay safe.

China. Yesterday, its legislature voted to reduce Hong Kong residents' voting power. The resolution allows Beijing to add more seats (read: loyalists) to the committee that elects Hong Kong's leader. And it's saying 'new rule': future legislators need to fall in line with China's national security legislation – which has been used to arrest dozens of pro-democracy figures. The changes are seen as the latest crackdown on pro-democracy Hong Kongers, who took to the streets in 2019 to protest a controversial extradition bill and advocate for Hong Kong's special, semi-autonomous status. And could take effect within weeks.

President Biden. Yesterday, during his first primetime address he gave Americans two dates to look forward to: By May 1, Biden says he'll tell states to open up COVID-19 vaccine eligibility to adults ages 18 and up. And by July 4th, he expects that Americans should be able to gather in small groups. The speech came hours after Biden signed the $1.9 trillion COVID-19 relief bill into law. The first stimulus checks could hit Americans' bank accounts as soon as this weekend.

Psst...here are a few smart ways to spend your stimulus money.

Who's saying 'nothing to see here'…

Who's getting the opposite of a "Slow Clap"…