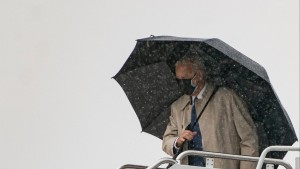 President Biden wants to give America some TLC.

Is it a flip or flop?

That's TBD. Yesterday, Biden unveiled a $2 trillion plan to overhaul the nation's crumbling infrastructure. We know, sounds boring. But life is a highway...and our highways need help. A lot of help: the US has received a "C-" for its infrastructure. Now, Biden's sharing some big renovation plans over the next eight years for:

Transportation: $621 billion would go toward repairing 10,000 of the worst bridges, 20,000 miles of roads, and improving ports, airports, and public transit. This could bump up our infrastructure grade and connect various communities to one another through things like railways and highways. All aboard.

Climate change: The focus is on boosting the number of electric cars using tax incentives, creating charging stations, and building a cheaper, cleaner energy grid. So, we can avoid blackouts and their potential deadly consequences (like in Texas). While tackling the two biggest contributors to carbon emissions: transportation and power plants.

Jobs: All of these tasks require money and workers. Biden said the "American Jobs Plan" would be the largest jobs investment since World War II. And it allocates billions of dollars to invest in job training, research and development, and manufacturing.

People: $400 billion would go to expanding long-term care services and the home health care workforce – an industry that's largely made up of women of color. The plan also calls on agencies like FEMA and HUD to expand grant programs for low-income communities – which are more likely to live in highly-polluted and flood-prone areas.

The Biden admin plans to fund it by hiking up corporate taxes to 28% – a 7 percentage point increase from the current tax rate. And while Biden thinks this is a necessary "domestic investment," not everyone agrees on the price tag. The GOP, which supports infrastructure changes, isn't a fan of raising taxes. So there could be some heated arguments in Congress as Democratic lawmakers try to get this plan approved by July 4.

The country's infrastructure is so outdated that not even the Property Brothers would want to touch it. But Biden's calling for a major gut-renovation and hoping that it'll address the jobs, health, and climate change challenges the country's facing.

Psst...here's how higher corporate taxes can affect your wallet.

Southern California. Yesterday, three people and a child were killed in Orange, CA, after a gunman opened fire in an office building there. A woman and the suspect were hospitalized and are in critical condition. The US is still reeling from mass shootings in recent weeks in Boulder, CO, that left 10 dead and shootings in three Atlanta-area spas in Georgia that killed eight people, including six Asian women. Authorities said they're still looking for a motive and are investigating. They have not named the victims. California Gov. Gavin Newsom (D) called the incident "horrifying and heartbreaking." This is a developing story.

Derek Chauvin's trial. Yesterday, on day three of the trial over George Floyd's death, witnesses and new video were center stage. Last Memorial Day, Floyd died in police custody after officers responded to a call about an alleged counterfeit $20 bill. The cashier who reported the bill to his manager testified, telling the court he felt "disbelief and guilt" when he saw things escalate, and that "this could have been avoided." The prosecution also showed police body cam footage of a terrified Floyd, crying and saying "please don't shoot me" as he was pulled out of his car. The trial resumes later this morning.

Why there's some good news and some bad news...

Pfizer – for the good news. Yesterday, after months of testing, the pharma giant said that its COVID-19 vaccine was 100% effective in kids 12 to 15. And that it created "robust" antibody responses. Now, the company hopes this will get more kids to school in the fall.

Johnson & Johnson – for the bad news. Yesterday, the drugmaker said a manufacturing facility in Baltimore, MD, that makes its one-shot vaccine did not meet quality standards. Now, there's reports the mixup in ingredients ruined up to 15 million doses. The facility did not have FDA approval to make the vaccine. And this mishap will delay the factory's FDA approval. But it's not expected to delay current shipments.

...Oh and speaking of vaccines, the Peace Corps is gearing up for its second ever domestic deployment in history – to help with the US's vaccination campaign

The Pentagon. Yesterday, it reversed a Trump-era policy that banned transgender people from serving in the US military. President Biden signed an executive order in January making the change. Now, the Pentagon's officially moving forward with it. And will make it easier for transgender people to become service members and will "provide a path" for medical treatments and gender transition as long as certain standards are met. The policy goes into effect at the end of the month.

Who's gracing us with her selfie game...