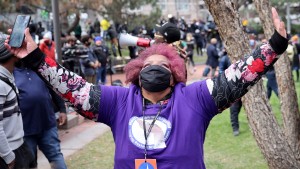 After about 10 hours of deliberations, an anonymous jury of seven women and five men agreed on Derek Chauvin's fate. Last Memorial Day, the former Minneapolis police officer murdered Floyd – a 46-year-old Black man – after kneeling on his neck for 9 minutes and 29 seconds. Viral video of Floyd's death reignited the racial justice movement. Hundreds of thousands of people across America (and the world) have demanded justice and called for an end to police brutality. Yesterday, the jury delivered its ruling on the three charges:

Second-degree murder…Guilty. In the most serious charge against him, the jury found that Chauvin assaulted Floyd, causing his death. With no criminal past, Chauvin could get a sentence of up to 15 years.

Third-degree murder...Guilty. Jurors found that Chauvin had no regard for Floyd's life when he pinned him to the ground as Floyd cried out "I can't breathe" 27 times. For this charge, there's a max of 25 years in prison – though Chauvin could face less.

Second-degree manslaughter...Guilty. Based on the evidence, the jury ruled that Chauvin was guilty of culpable negligence and was aware that his actions could put Floyd at risk of death. This charge carries a sentence of a max of 10 years in prison, but the former officer is expected to serve four because he doesn't have a criminal history.

Floyd's family attorney called it "painfully earned." People across Minneapolis celebrated and broke out into tears. Civil rights orgs applauded the conviction. But after years of police officers escaping justice in the killings of Black Americans, many felt like this was more accountability than justice. The bystanders were celebrated yesterday, including Darnella Frazier – she was 17 years old when she recorded Floyd's encounter with police...and his murder. Without her video, many say this trial could have had a different outcome.

Yesterday, Americans were reminded of the long fight ahead to reach true justice – when not a single Black person is unjustly killed by police. The Biden admin echoed a similar message. President Biden – who got flak for saying he was praying for "the right verdict" – said Chauvin's conviction could be a "step forward" in America's fight for justice. VP Kamala Harris said there's still a lot more work needed to "reform the system." And called on Congress to pass the George Floyd Justice in Policing Act – which would ban chokeholds and change qualified immunity for law enforcement. Meanwhile, Chauvin will find out how much time he'll spend behind bars in June, and his defense team could still file an appeal. Three other officers charged in Floyd's death are expected to go on trial in August.

Chauvin's conviction is a landmark moment in the fight for racial justice. Now, for it to mark a turning point, there needs to be sustained attention, action, and reform to make clear that Black Lives Matter. Don't lose focus.

PS: Traumatic events, like George Floyd's murder, impact everyone differently. We Skimm'd ways to help you identify what you're feeling along with coping tactics here.

Derek Chauvin's trial over the killing of George Floyd is considered one of the most important court cases in US history. In part because murder convictions against cops are rare.

Law enforcement officers kill around 1,000 people a year in the US. But one study found only 121 officers have been charged with murder or manslaughter for on-duty killings since 2005. And only 44 were actually convicted. Much of this has to do with…

Police unions: They can provide legal representation when necessary – just like the Minnesota Police and Peace Officers Association funded Chauvin's defense. Unions can also set the terms of internal investigations, including things like determining if they should hold off on investigating and how an officer can be questioned.

Qualified immunity: A 1982 legal doctrine has protected police officers and gov officials from being sued. And although officers can be sued in a civil case, it rarely leads to punishment because of this protection. Last month, the House passed a police reform bill that would end qualified immunity and make it easier for people to sue in civil cases. But it's not clear if it'll go into law.

The overall system: In recent years, there's been a major push for police reform, including banning chokeholds and mandating body cams. But also a push to end systemic racism in the US's policing system. And while Chauvin was found guilty on all three charges for murdering George Floyd, other cases – like Breonna Taylor's, Daniel Prude's and Jacob Blake's – have yet to get justice.

Why we're still fighting for change...

Ma'Khia Bryant. Yesterday, right before Derek Chauvin was found guilty of murdering George Floyd, a white officer in Columbus, OH, killed a teenager. 16-year-old Bryant – who is Black – reportedly called police for help because "older kids" wanted to assault her. Police arrived on the scene and said Bryant was allegedly trying to stab two people. But her family says Bryant dropped the knife before she was shot. The teen was reportedly shot four times. Police showed the body camera footage in slow motion. And said the officer involved will be pulled off patrol duty. It's the latest teen shooting making headlines after Chicago police released a video of an officer killing 13-year-old Adam Toledo. Columbus Mayor Andrew Ginther (D) said the shooting is being investigated.

Johnson & Johnson. Yesterday, the company said it was resuming COVID-19 shots in Europe. Six women (out of nearly 7 million people who've received the shot) have developed blood clots leading to "stroke-like" illness. One woman died. US health officials paused the vaccine rollout and began an investigation. Meanwhile, J&J halted its rollout in Europe. And for the second time since March, health officials in Europe said there's a possible link between certain vaccines (specifically, AstraZeneca's) and clots. But now they're hitting reverse, maintaining that the blood clots are extremely rare and that the benefits outweigh the risks. The news comes as many countries in Europe have fallen behind on vaccinations.

European Super League. Today, its founder said the new league can't go ahead after several soccer teams said 'game over.' On Sunday, 12 of the largest and richest soccer teams in Europe announced the new league as a breakaway from other European ones (like the Champions League). But critics like the UEFA – European soccer's governing body – condemned the move, saying teams that participate would be banned from the Champions League. FIFA agreed and told the teams that they have to pick one or the other. Manchester City was the first one to bow out, prompting UK PM Boris Johnson to call on other UK teams to do the same and leave a league that he said reportedly offends the "principles of competition." More did. Now, with few teams left, the Super League's founder is reportedly saying 'back to the drawing board.

Who's barking up the crypto tree...

Dogecoin. Yesterday, the cryptocurrency that started as a joke went to new heights as its fans celebrated Doge Day. The crypto has grown by over 5,000% this year alone. And is now valued at about $50 billion – more than Marriott International Inc. Celebrities like Elon Musk and cryptocurrency fans have pushed its success, driving the coin further into the crypto world.

...Oh and speaking of crypto, Venmo announced it will now let users buy and sell bitcoin and other cryptocurrencies.

Psst...here's what to know about investing manias like cryptocurrencies before jumping in wallet-first.

When you wanna taste the rainbow...