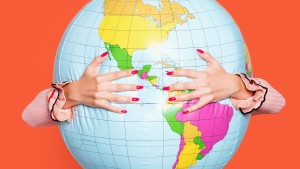 Mother's Day is this weekend. Let's talk about Mother Earth.

Right. But climate change is causing problems. As we mentioned last month, the average world temperature has gone up a little over 1°C (2°F) since 1880 – most of that rise coming since 1975. The change has contributed to stronger and more frequent extreme weather events, like hurricanes, wildfires, droughts, and floods. Scientists warn it's only getting worse. And human activity is largely to blame. The UN's long been focusing on how we could treat Mother Earth better. And this time, it's zeroing in on methane emissions.

Methane is a potent greenhouse gas that can warm the planet 80 times as quickly as CO2. A UN report published yesterday found that methane emissions from the oil, gas, and agriculture (think: cows, sheep) industries are leading to thousands more deaths from air pollution (per year) than previously thought. But (yes, thankfully there's a 'but'), cutting methane emissions by up to 45% in the next decade could help humanity out. It would help prevent hundreds of thousands of hospitalizations, premature deaths, and millions of tons of crop losses.

How do we do that?

Lots of ways. Companies could fix leaks in natural gas pipelines, coal mines, and drilling sites – helping to reduce 36% of methane emissions. They could also choose renewable energy over fossil fuels. Then there's diet. Scientists say reducing meat consumption is the single best environmental action a person can take. Argentina's taking notes. But changes in diet aren't just for humans. One study found that feeding cows seaweed can cut their methane emissions by 82%. But these efforts may take longer without everyone on board. And not everyone is: One report estimated that China's emitted more greenhouse gases in 2019 than the US and any other developed country combined.

If we're being honest with ourselves, we often wait 'til the last minute to get a Mother's Day gift. But Mother Earth can't wait long. Let's hop to it.

Where voters are getting less of a say…

Florida. Yesterday, Gov. Ron DeSantis (R) signed new voting restrictions into law. They impose stricter voter ID requirements and more hoops for those who want to request an absentee ballot (like providing their driver's license or the last four digits of their Social Security number). They also limit drop boxes and require them to be monitored. The move came after over 4.7 million Floridians voted early by mail in 2020. And after the Trump campaign's baseless allegations of voter fraud failed to get traction in court. DeSantis called the new law the "strongest election integrity measures in the country." The NAACP and voting rights activists like the League of Women Voters of Florida disagree. They argue the law disproportionately affects communities of color and violates the Voting Rights Act. And are taking their allegations to court.

Where protesters are taking to the streets…

Colombia. Last week, protests began over a tax reform plan to raise taxes on citizens and businesses alike. But they quickly evolved to include grievances against police violence, inequality, and poor health and education systems. Things got violent as protesters clashed with police. At least 25 people have been killed, hundreds more have been injured, and dozens have gone missing. Right-wing President Iván Duque withdrew the bill and the finance minister resigned. But the protests show no signs of stopping. And the UN's trying to remind Colombian authorities of their responsibility to respect human rights.

US unemployment. Last week, the number of Americans who filed for first-time jobless benefits fell below 500,000 – the lowest level since the pandemic began over a year ago. This comes as vaccines have helped loosen restrictions and allowed businesses to re-open. And more people are embracing retail therapy, dining out, and traveling like it's hot – bumping up hiring. It could be starting to look a lot like the Before Times.

When you need more than one historical gem...