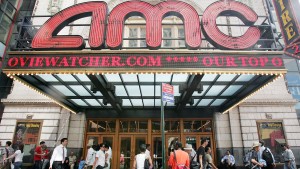 As the US reopens, traders are throwing it back.

Earlier this year, the OG meme stock GameStop saw its shares jump nearly 1,800%. And it wouldn't be a meme stock if it didn't get its boost from Reddit. The stock's run was fueled by a massive community on the subreddit r/WallStreetBets (think: a forum where people can share trading tips and ideas). They all rallied together to stand up against big hedge funds and mess up short sellers. Basically, they put their money where their mouth is to give underdogs a boost in the markets. And they've done it again.

Grab the popcorn: Yesterday, movie theater chain AMC saw its shares nearly double to record highs after a frenzy of trading. Things got so crazy that trading paused...four times. It spurred rumors that trading app Robinhood put a halt on things (like it did last time). But the company said 'don't look at us,' and aimed its bow and arrow at the New York Stock Exchange. At one point, the stock reached as high as $72.62. Meanwhile, AMC's rolling out the red carpet for its new investors. And buttering them up with a free large popcorn.

20% coupons: As a meme stock, Bed Bath & Beyond saw shares jump over 60% yesterday – giving it a market value of more than $4 billion. The company's stock had already been on the up and up after it announced some fresh plans (think: new private label brands). Now, it's caught up in the frenzy of individual investors trying to revive the stocks of nostalgia. And its shares are soaring to infinity...and Beyond. (We had to.)

Low-hanging fruit: This year alone, BlackBerry's shares jumped at least 100%. The company, known for its iconic full keyboard phone (remember that Hillary Clinton meme?), was one of the early targets of traders on r/WallStreetBets. BlackBerry once made one of the hottest phones on the market, but has long struggled to keep up. Making it a perfect target for Reddit users. BBM, is that you?

What's the latest on regulations here?

Earlier this year, Robinhood's CEO defended his company in front of lawmakers after the app stopped everyday people from trading GameStop stock. And Treasury Sec Janet Yellen had to meet with regulators over market volatility. Last month, the head of the Securities and Exchange Commission said it's been working on a report addressing the GameStop saga (to be released this summer). And that new rules may have to be issued to address apps that gamify trading. But for now, it's fair game.

These market yo-yos are a result of small dollar investors (think: your next door neighbor, old roommate, and more) taking on massive Wall Street investors and hedge funds. But who knows how long they'll be able to have this type of influence.

Psst...we Skimm'd more on meme stocks and other investing manias (like crypto and NFTs) people can't gamestop, won't gamestop talking about. Here's what to know before investing your money.

Israel. Yesterday, the country's opposition leaders made a deal to form a coalition government, paving the way for PM Benjamin Netanyahu's exit. Last month, Netanyahu – Israel's longest-serving PM (who's on trial for corruption) – failed to piece together a gov after Israel's March election...the fourth in two years. So centrist Yair Lapid and far-right leader Naftali Bennett teamed up to try to reach 61 seats, the number needed to rule parliament. Just before yesterday's deadline, the duo managed to pull it off. But it's not over yet. Next week, parliament will vote to approve the coalition gov.

This study. A new analysis of a Census Bureau survey found that the last two stimulus checks led to more than a 40% drop in food insecurity and financial instability among families. And over a 20% drop in anxiety and depression. Back then, critics argued the checks were wasteful and questioned whether they'd reach the people most in need. Now, this study's saying 'yes, it helped.' Still, the study didn't address the effect on the US deficit and whether it gave people less motivation to find a job.

Fortune 500. Yesterday, it said 41 women are leading the US's largest companies – an all-time record. Among the CEOs are Roz Brewer from Walgreens Boots Alliance and Thasunda Brown Duckett from TIAA – the first time two Black women are on the list simultaneously. Another name to know: Citigroup's Jane Fraser – the first woman to lead a major US bank. But despite the milestones, women still only hold 8.1% of CEO spots on the Fortune 500 list.

What's one step closer to being 'ova'...

Gendered last names. Yesterday, lawmakers in the Czech Republic reportedly took up a proposal that would allow women to choose if they want "-ova'' in their last names. In the country, women typically have their father's or husband's surname with "-ova" tacked on (think: Novak becomes Novakova). But this practice has long been deemed as sexist. A former justice minister proposed ending the linguistic norm. And now, the country's senate will take up a vote on the change.

Whose LiveJournal didn't quite take off...

Trump's blog. Yesterday, the former president shut down his blog less than one month after lauding it as a way to connect to his supporters. Apparently, readers didn't get the message. Now, Trump wants to go bigly and launch a new social media platform.

Who's ready for a new adventure...