Daily Skimm: El Salvador and Bitcoin, an IG Report on Lafayette Square, and the Statuette of Liberty 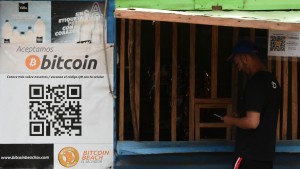 El Salvador has made bitcoin a legal currency.

The Central American country doesn't have its own currency. Since 2001, it's used the US dollar. And its economy is still recovering after more than a decade of civil war. Social inequality, a high crime rate, and reports of government corruption don't help. With bitcoin's recent rise in popularity, and since the crypto's decentralized (aka it's not controlled by banks or governments) – Salvadoran lawmakers decided to place a bet on the coin. It's the first country in the world to give it a shot.

Now, within 90 days, prices for goods in the country will be shown in US dollars and bitcoin. Businesses can put up their 'bitcoin accepted here' signs. And the gov plans to set up a process that would allow bitcoin to be converted into US dollars. On top of that, those who use the cryptocurrency won't be taxed on their capital gains. The gov will also promote training so Salvadorans can access bitcoin transactions. Important since 70% of the population lack access to traditional financial services. But the move is getting some mixed reviews.

I had a feeling you'd say that.

Bitcoin can be quite volatile. And critics say it may not be the best option for one of the poorest countries in Latin America. Some worry it could exacerbate gang problems – with many now able to turn bitcoin payments into US dollars with the gov's help. Others point to the huge impact bitcoin mining can have on the environment. But President Nayib Bukele reportedly wants to use geothermal energy from volcanoes (yes, volcanoes) for that. And says the cryptocurrency could make it easier for families living abroad to send remittances back home – which make up 23% of the country's GDP.

El Salvador's the first country to take an official bite out of bitcoin. But the move is leaving some bit-ter about the drawbacks.

What's got everybody talking...

This watchdog report. Yesterday, a new inspector general's report said that federal police didn't clear peaceful protesters from Lafayette Square so then-President Trump could have a photo-op. Last June, officers fired tear gas at demonstrators there who were protesting racial injustice days after George Floyd's murder. Later that day, Trump had a photo-op in front of a nearby church – which drew major criticism. Now, the investigation concluded that police removed the protesters so a contractor could install fencing – not for the former president's photo. And that law enforcement officials failed to properly communicate when it came to their use of force against the protesters. Trump thanked the IG for "totally exonerating" him. But a House committee said it will investigate why "heavily armed law enforcement attacked peaceful civilians" in the first place.

Who's buying a round of shots...

The Biden admin. Today, President Biden is expected to announce he's buying 500 million doses of Pfizer's coronavirus vaccine. And will donate all of them to COVAX, a WHO initiative aiming to get coronavirus vaccines to poorer, developing countries. The first 200 million Pfizer doses could be sent out as soon as this year, and the remainder shipped out next year. This comes as the US and other wealthy govs that snatched up vaccine supply face pressure to step up amid dropping case numbers. But activists still want world leaders to do more – including setting up vaccine manufacturers overseas and sharing the tech to develop them.

What's coming to an end…

The Keystone XL pipeline. Yesterday, Canada's TC Energy announced it's pulling the plug on its controversial project. Former President Trump had given them the go-ahead after the project had been stalled for years amid court challenges and protests. But on his first day in office, President Biden revoked a key permit for the pipeline (which would've carried oil from Canada to Nebraska). Canadian officials had apparently been working to get Biden to change his mind but the president said 'no backsies.' Now, TC Energy is saying it's going to coordinate with regulators, stakeholders, and Indigenous groups to safely exit the project.

Alexei Navalny's organizations. Yesterday, a Russian court outlawed the opposition leader's orgs – deeming them as extremist. Navalny has been behind bars since January when he returned to Russia after being poisoned with a nerve agent. Now, people could go to prison for things like working with Navalny's orgs, donating to them, and even commenting on social media. It comes as the Kremlin has suppressed opposition groups. And ahead of next week's meeting between President Biden and Russian President Vladimir Putin. Navalny isn't standing down. He denounced the court's action and a statement on social media read "we will not abandon our goals and ideas."

Who's hitting the renegade…

President Biden. Yesterday, he revoked former President Trump's ban on Chinese-owned apps TikTok and WeChat. Last year, Trump tried to restrict the apps saying they were threats to US national security. The whole issue got tied up in federal court, and kids still do whatever it is they do on TikTok. Now, Biden threw the ban out and instead directed the Commerce Dept to review foreign-owned apps that "present an undue or unacceptable risk" to the US.

Who's getting 'une petite soeur'...

The Statue of Liberty. France is sending a new bronze statue that is 1/16th the size of the OG in time for Independence Day. Merci.

When you missed the "ring of fire"...

Don't miss the end of an E!ra.