Daily Skimm: Put Your Vax Into It, Hungary Protests, and Girl Scout Cookies 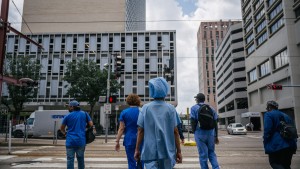 Put Your Vax Into It

The one word on everybody's lips: vaccines.

Across the US, many hospitals are requiring their staff to roll up their sleeves and get vaxxed. That includes Houston Methodist Hospital in Texas. In April, the privately run hospital set a policy for its 26,000 employees to get jabbed by June 7. But 117 employees sued, saying they were being coerced into getting "dangerous" vaccines that rose to the level of "medical experimentation." The hospital defended itself by saying 'safety first' – for both patients and staff. Over the weekend, a fed judge sided with the hospital. It looks to be the first federal ruling over COVID-19 vax mandates.

The lawyer representing the employees in the case says they will bring this thing all the way up to the Supreme Court if needed. And that employment shouldn't mean being forced to act as human "guinea pigs." The judge's response: if employees don't like it, they can work elsewhere. Since the hospital has every legal right to require vaccines, according to the US Equal Employment Opportunity Commission (EEOC)'s latest guidelines. And businesses across the country are weighing whether to issue mandates of their own. Especially with coronavirus variants on the rise.

Health officials are sounding the alarm on the Delta variant. First detected in India in October, the contagious variant has shown to double the risk of hospitalization. And has been found in over 70 countries (including the US). In the UK, gov officials have delayed the country's full reopening by four weeks as a precaution. But it's not all bad news. A UK study found that vaccines are effective against Delta. And while some states like Vermont and Massachusetts are pricking up what shots are putting down, others (hi, Alabama, Louisiana, Mississippi) don't appear as enthusiastic. Even as the US could be seeing a fourth vaccine in its arsenal.

Over a year into the pandemic, the US has a surplus of three safe and effective vaccines – a major feat. But now the case out of Texas puts a spotlight on an ongoing challenge in the US: vaccine hesitancy.

Where people are speaking out…

Hungary. Yesterday, thousands of people protested over the gov's latest crackdown on LGBTQ+ rights. PM Viktor Orbán's gov has passed laws targeting the LGBTQ+ community. Last year, the gov amended the constitution's definition of family to effectively ban adoptions by gay couples. Gender changes on official docs are also prohibited. Now, the gov wants to outlaw content that promotes or portrays homosexuality and sex reassignment. The gov says 'this is all about protecting kids.' Critics see it as bigoted. Some opposition lawmakers say they'll boycott today's vote. But the bill's expected to pass.

PS: We don't need data to know that discrimination against LGBTQ+ people has a negative impact on the community's mental well being. But here's some just in case, and info on how to be a better ally.

Aung San Suu Kyi. Yesterday, Myanmar's former leader went on trial. In February, the country's military launched a coup, ousting Suu Kyi from power and arresting her over what they claim was election fraud. The move was widely seen as an attempt to squash the influence of Suu Kyi, who'd been moving the country toward democratization and away from the staunch military rule that had dominated Myanmar for decades. Now, Suu Kyi's facing a long list of charges, including allegedly importing walkie-talkies illegally and violating COVID-19 restrictions. The military – which has reportedly killed more than 800 people and detained nearly 5,000 since the coup began Feb 1 – has yet to show any evidence of election fraud. The UN has called for a return to democracy.

Who's looking in the mirror…

Chrissy Teigen. Yesterday, she apologized, again, for her history of cyberbullying and harassment. From taking on Piers Morgan to former President Trump, Teigen admitted that she was an online "troll, full stop." Last month, model Courtney Stodden, who identifies as nonbinary, brought up tweets from 2011 of Teigen telling them to take a "dirt nap." And private DMs telling them to commit suicide. Stodden was 16 at the time. Teigen apologized, but several department stores reportedly dropped her products. Yesterday, Teigen gave a longer apology, saying there are more people she needs to give an apology to. And that she's "not seeking or deserving any sympathy" but asking for "patience and tolerance."

PS: If you or someone you know needs this, here's the number for the National Suicide Prevention Lifeline 1-800-273-8255.