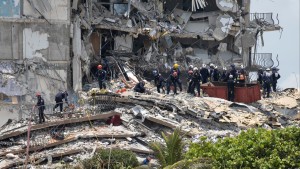 Florida is in mourning.

Last week, a section of a 12-story condominium collapsed in Surfside, a town near Miami. So far, 37 people have been rescued. At least nine people have died. 152 are still missing. Rescue crews continued to search for survivors amid fire and smoke. Miami-Dade County's Mayor Daniella Levine Cava (D) says there's no evidence of foul play that led to the collapse. But some have concerns the building wasn't up to code.

The cause of the collapse is still unknown – and could have been due to a range of factors. In one explanation, some experts believe a column or concrete slab gave way below the pool deck, taking the rest of the building down with it. In 2018, an engineering report found "major structural damage" to the building. And urged the building managers to fix the "abundant cracking" found in columns, beams, and walls of the parking garage below the pool deck. Some reported damage was likely due to corrosion from consistent water leaks and years of salty air along the coastline. The repairs would've reportedly cost $9 million or more. A lawyer for the building operator said they'd seen nothing to suggest the collapse had anything to do with the 2018 review. But concerns remain – especially over the structural integrity of a sister building by the same developers.

Rescue teams are still looking for survivors. Gov. Ron DeSantis (R) has called the event "traumatic" and declared a state of emergency, allowing FEMA to step in with recovery efforts. Meanwhile, officials are promising "changes" to Florida building codes. And family members are setting up makeshift memorials near the rubble for those still missing. As for the sister building, it's been up to the residents to decide whether to evacuate.

There is a staggering number of people missing – each one with loved ones waiting for answers. It may have been the deadliest accidental collapse of a building in US history. Here's how you can help.

What everyone is watching...

The Delta variant. On Friday, Israel reimposed its indoor mask mandate amid a wave of new COVID-19 infections. At least 70% were caused by the Delta variant. And about half of those infected were believed to have been fully vaccinated with Pfizer. Reminder: vaccines prevent hospitalization and death in many cases, but infections are still possible. In this case, the infections were believed to be asymptomatic or mild. But even mild cases can result in long-haul symptoms. The news is raising alarms about the new variant – especially since Israel has a high vaccination rate. In the UK, the variant's surge has delayed reopening plans. The rest of Europe is keeping a close eye. Now, the World Health Organization is advising people who are fully vaccinated to continue to practice COVID-19 safety precautions (like wearing masks and social distancing) to prevent further spread of the variant.

Psst…If you're planning to travel this summer, here's how the Delta variant could affect those plans.

The US intel community. On Friday, it released a highly anticipated report on "unidentified aerial phenomena" – government speak for UFOs. The report did not say aliens exist. But it also did not *not* say aliens exist. Here's what we learned: Since 2004 there have been 144 reports of flying objects – 143 of which the gov can't ID. In more than a dozen of those cases, the gov has no idea how the objects moved the way they did, exceeding the known tech of countries like Russia and China. *Cue "The Twilight Zone" music.* In only one case could the gov identify what an object was: a large deflating balloon. *Cue the sound of a large deflating balloon.*

Who's going to prison…

Derek Chauvin. On Friday, the former Minneapolis police officer was sentenced to 22.5 years in prison for the murder of George Floyd. The sentence is less than the 30 years prosecutors wanted but more extensive than what the defense requested (think: probation and time served). Floyd's family said they didn't want to see "more slaps on the wrist" and pleaded for Chauvin to still get the maximum prison time. But experts believe Chauvin could be eligible for parole in just 15 years. Chauvin offered his "condolences to the Floyd family."

Who's not getting their peaches from Georgia…

The DOJ. On Friday, US Attorney General Merrick Garland announced that the DOJ is suing Georgia over its new voting laws. Earlier this year, the state's governor signed a bill that limits the use of ballot drop boxes, shortens the early voting period for runoffs, and sets up new ID requirements for absentee ballots. Now, the DOJ says the new law is intended to restrict Black voters' access to the ballot box. And is suing for parts of the law to be struck down and for federal observers to be required in future Georgia elections.

Megan Thee Stallion. Yesterday, the artist swept up wins, including best female hip hop artist. Cardi B is having another Cardi Baby. Queen Latifah is a queen. Lil Nas X had the audience calling him by his name. And everyone remembered DMX.

Who's had enough of the status quo…