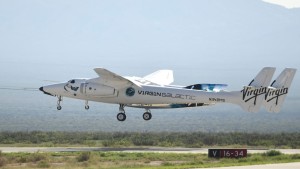 Richard Branson just became the first billionaire to test out his own spacecraft.

Didn't know that was a contest.

It is. Yesterday, Branson and five other crew members hopped aboard Virgin Galactic's SpaceShipTwo Unity – a space plane. Family and friends (and Khalid) waved as Unity went to infinity and beyond. A mother ship carried Unity about 50,000 feet into the air before letting the space plane fly on its own. Unity fired up its engine and traveled three times the speed of sound to the edge of space (or a little over 53 miles above the New Mexico desert). And gave all its passengers a three- to four-minute taste of weightlessness and a snapshot of the Earth's curve before safely gliding back home. The flight lasted about an hour. And since the passengers reached an altitude that's classified as the edge of space, they earned their astronaut wings.

Out of this world.

Metaphorically, yes. Up until now, space agencies like NASA had been dominating the space exploration game by carrying out missions and training for astronauts. But the plan(et)s are changing as private companies take flight. Just last year, Elon Musk's SpaceX became the first in nearly a decade to carry out a spaceflight from US soil. (And the first private company to send people into orbit.) Boeing and Axiom Space have plans in the works, too. And then there's Blue Origin, which will take off in eight days with Jeff Bezos on board. The Amazon founder may be hoping to beat the hype around Branson – especially since Virgin Galactic's flight was coincidentally (or not) moved up after Bezos revealed his plan for takeoff.

Yes, but not everyone's seeing stars. After more than a year of living through a pandemic that's killed over 4 million people worldwide, some are saying 'space is great and all but we've got some sh*t to figure out on this planet.' Including things like the growing effects of climate change and how space tourism could play into that. And Branson's 'childhood dream come true' comes after his airline (Virgin Atlantic) asked employees to take eight weeks of unpaid leave last year. And following Branson's request for a gov bailout to help the airline. Virgin Atlantic ultimately filed for bankruptcy protection in the US. Not flying high. Still, there seems to be a wow factor about inching closer to space tourism. Branson's company plans to send (very rich) regular people into space in 2022. Tickets for 'zero gravity coming right up' have reportedly sold for $250,000.

Space tourism is on the lift off. And could bring nearly $4 billion in annual revenue by the end of the decade. But while billionaires enjoy the thrill of space, others are focused on dealing with Earth's problems

Cuba. Yesterday, thousands of people took to the streets to join the biggest anti-government protests there in decades. In several of the island's towns, Cubans expressed anger and frustration over high prices, food and medicine shortages, and concern over the gov's handling of the pandemic. For years, the country – already struggling under its oppressive Communist government – has seen a worsening economic crisis. The gov's partly blamed US sanctions for its decline. Now, the pandemic has made the economic situation worse as shutdowns have slowed tourism – a lifeline for revenue, food, and fuel. The protests – not seen in decades – are rare for a country that's known to crack down on dissent. Demonstrators took to streaming the protests on Facebook. But some of them reportedly went missing. And the authorities soon after shut down the internet.

Where people are feeling the heat…

The Western US. It's dealing with its third heat wave this summer. On Friday, California's Death Valley reached 130°F. On Saturday, Las Vegas hit 117°F. St. George, Utah, did too – it tied an all-time high state record. About 30 million people were under excessive heat alerts, including in Arizona, Utah, Oregon, and Idaho. This comes as wildfires in the West continue to rage in the region, burning over 80,000 acres. Strong winds are driving the flames. Dozens of buildings have been destroyed and it's led to evacuations including in California, Nevada, and Oregon. Two firefighters have died in Arizona.

The CDC's new guidance. On Friday, health officials said 'let's get kids back to school in the fall.' And offered some guidelines to help local govs make it work. Think: no masks needed for fully vaxxed kids and adults. (Those who haven't been jabbed should still mask up.) And keeping ventilation, cleaning, and social distancing on the lesson plan. Great news for overwhelmed parents. But also for kids, since data shows students have fallen behind in their learning since attending Zoom university.

Psst...Still got questions about mask guidelines? We've got some answers.

These athletes. UFC fighter Dustin Poirier came out on top. In the Wimbledon world, tennis star Ashleigh Barty gets to throw a party. And Novak Djokovic is now part of a three-way tie with his 20th Grand Slam title. Things got Messi when Argentina beat Brazil 1-0 in the Copa América final – scoring their first major title since 1993. And Italy is drinking from the Euro Cup. Salute.