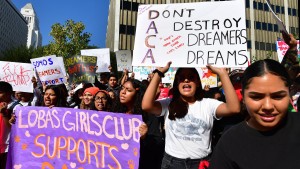 DACA (Deferred Action for Childhood Arrivals) is an Obama-era program that protects nearly 650,000 young undocumented immigrants – known as Dreamers – from being deported. And gives them ways to legally study and work in the US. But throughout his term, then-President Trump fought to get it canceled, saying Congress should've established this, not the president. And SCOTUS said 'you can't just end it without giving a reason.' But the ruling allowed Trump to try again to shut it down with a better explanation. This year, President Biden signed an executive action directing DHS to look into ways to protect the program. But now, a Texas federal judge is saying 'maybe Trump had a point.'

On Friday, the judge ordered the Biden admin to stop approving new DACA applications – affecting tens of thousands of young immigrants. After reviewing a lawsuit brought on by Texas AG Ken Paxton and several other state AGs, the judge agreed that then-President Obama didn't have the power to stop deportations. Or to give work permits to Dreamers. Or set up DACA in the first place. So he put an end to new applications...for now. And sent the matter back to the Dept of Homeland Security to figure out. The order doesn't affect those already enrolled in DACA. But the decision is getting mixed reviews.

Paxton called it a "great win for the rule of law." The other AGs agreed, reportedly arguing DACA recipients take away from state resources for health care and education. Dreamers have had enough of the back-and-forth. And are calling for legislation to protect them. Biden agrees. He called the judge's decision "deeply disappointing" and said the Justice Department would appeal. He and other Dems are pushing for Congress to pass the Dream Act – granting a pathway to citizenship for Dreamers.

Many Dreamers have only known life in the US after arriving at a young age. Now tens of thousands face an uncertain future as politicians and courts keep debating their fate.

This report. Last week, a report (released by a Senate committee) found that a unit within the Commerce Dept racially profiled several department employees, illegally surveilling them. Founded during the Bush years, the department's Investigations and Threat Management Service (ITMS) has reportedly since gone "rogue." More than two dozen whistleblowers say the ITMS disproportionately targeted people of Chinese, Southeast Asian, and Middle Eastern descent. Some described the unit as a "gestapo" that opened "frivolous investigations" without any evidence. Now, the committee is suggesting a full review and possible structural reform of the unit.

Pegasus. Dozens of governments reportedly use the Israeli military-grade spyware to track terrorists and criminals. But a recent media investigation found that it was used to hack smartphones belonging to politicians, reporters, human rights activists, and Arab royal family members. As well as two women that were close to murdered journalist Jamal Khashoggi. Pegasus can bypass iPhone and Android security, steal passwords, photos, recordings, data, and activate the microphone. It's unclear who ordered the hacks, or why. The firm denied what it called "uncorroborated theories" including that its tech was used against Khashoggi. But it said it would look into it.

Who's got something to celebrate…