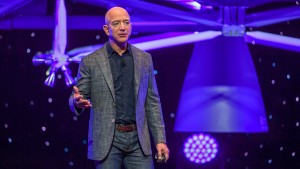 Jeff Bezos is ready for liftoff.

What a Prime flex.

He's not the first. Last week, eyes were on Virgin Galactic's Richard Branson as he became the first billionaire to reach the edge of space in his own spacecraft. But at 9am ET today, Bezos hopes to make Branson 'so yesterday.' And make his own mark on the 52nd anniversary of the Apollo 11 moon landing. That's because Bezos and his crew will blast off from Texas to the Earth's edge on the New Shepard rocket and capsule. Courtesy of his Blue Origin space company. The mission will fulfill Bezos' lifelong dream, fueled by his long-term investment (hi, Amazon). But as you might expect in the battle of billionaires, Bezos is aiming higher.

You can actually start streaming the event at 7:30am ET. Catch Bezos along with his little bro Mark (sorry, Christina), 82-year-old female aviation pioneer Wally Funk, and 18-year-old Oliver Daemen as they go to infinity and beyond. They'll be riding in OG spaceflight fashion with a rocket and space capsule that looks...familiar. And make history as Blue Origin's first crewed flight on autopilot. All crew members will feel three to four minutes of weightlessness before returning to Earth. But they'll enjoy it at 62 miles from Earth (unlike Branson's measly 53-mile journey). And potentially have better views too, thanks to the shuttle's bigger windows.

Yep. But billionaires seem to be looking to space instead of focusing on problems on Earth. While Bezos has committed $10 billion to fight climate change, Amazon illegally fired two employees pushing the company to reduce its impact on climate change. And was accused of squashing a union campaign earlier this year by spreading anti-union messages at an Alabama warehouse. It also faced accusations of poor working conditions and low wages. And of not providing PPE to warehouse employees at the beginning of the pandemic. But Bezos hopes this space flight will "build the road to space for the future generations" so that humans can live long and prosper. If successful, Blue Origin could soon allow customers to add 'space mission' to cart. (TBD on the price tag.)

The hype over billionaires going to space is just starting. And while some critics may see the mission as a vanity project. Others await the opportunities that could arise from potential new discoveries.

China. Yesterday, the Justice Dept announced it charged four Chinese nationals in a worldwide hacking campaign. The DOJ says they targeted dozens of companies, universities, and govs in 12 countries (including the US) between 2011 and 2018. Three of those charged were part of China's intel agency. The hackers allegedly used spearphishing to target infectious disease research including Ebola, MERS, and HIV/AIDS. It comes as the Biden admin, NATO, and other countries blame the Chinese gov for a cyberattack on Microsoft (more on those here). Now, the DOJ's saying this is a reminder that "no country or industry is safe" from hackings. China has yet to respond.

Journalists' records. Yesterday, the DOJ limited prosecutors' ability to get reporters' emails and phone records when investigating leaks. Earlier this year, reports found that the Trump-era DOJ secretly seized the phone records from several reporters (from The Washington Post, CNN, and The New York Times) in 2017. Obama-era regulations from 2013 usually required prosecutors to let news orgs know they're requesting their records. Now, AG Merrick Garland is saying 'let's stop taking them altogether.' And that he'd support Congress if they made these protections more permanent. Press advocates praised the change. But some gov officials say it could complicate important investigations.

Where the law is giving its own jab…

Indiana University. This week, a federal judge upheld the university's COVID-19 vaccine requirement for in-person students. It could be one of the first cases to take up vax mandates on college campuses. Earlier this year, the university said students, faculty, and staff need to be fully vaccinated in order to return to campus this fall. But eight students sued, saying it was unconstitutional and violated their right to bodily autonomy. Now, a judge has ruled in the school's favor. A lawyer for the students says they plan to appeal.

Where things are trying to get out of limbo…

Haiti. Yesterday, Claude Joseph said he's agreed to step down as the country's acting PM. Joseph took control of the gov after gunmen assassinated President Jovenel Moïse earlier this month. Enter: a power struggle. Moïse (days before his death) had already appointed Ariel Henry – a neurosurgeon – to serve as prime minister. The problem? Henry hadn't officially been sworn in. While the US initially recognized Joseph as interim PM, it changed its tune last weekend. And joined other countries' call for Haiti to have a "consensual and inclusive" gov with Henry at the helm. Now, Henry's expected to take up the PM role today. And Joseph will serve as foreign minister. As for the assassination, the gov's still investigating.

Who's delivering wins for the LGBTQ+ community…

Who's saying 'no need to read between the lines'...