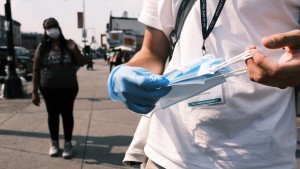 The CDC reversed its mask guidelines...again.

Yeah, we saw it coming too. In May, the CDC said that fully vaxxed Americans could go without masks in most places. Many businesses, local govs, and workplaces followed suit. But as the delta variant spread, COVID-19 cases rose. In early May, delta made up about 1% of reported infections. Now, it makes up an estimated more than 80% of cases as it's roughly twice as contagious as the original version of the virus. And has double the hospitalization rate. Nearly all of US COVID-19 deaths last month were among unvaccinated Americans. But the CDC's now catching up to WHO recommendations. And is suggesting that people – fully vaxxed or not – mask up indoors.

If you're in a public area (like a grocery store, mall, or restaurants) – with high or substantial transmission – it's best to mask up. That applies to nearly two-thirds of all US counties – including in states like AR, LA, and FL. You may also want to add masks to the back-to-school shopping list. The CDC now recs that children in grades K-12 also wear one, along with teachers and staff (even if vaccinated) – walking back 'mask off if you've been jabbed' guidelines they announced over two weeks ago.

The CDC says there's new data on delta that supports their decision to hit 'edit.' CDC Director Dr. Rochelle Walensky said that "in rare occasions" people who contract delta after being jabbed may spread it to others. Concerning, because it could put unvaxxed family or friends with weak immune systems at risk. Some Biden admin officials reportedly worry the new mask recs could lead to confusion or raise doubts about the efficacy of vaccines. But experts are saying 'we need all the protection we can get.' And President Biden is reportedly planning to announce tomorrow that millions of federal employees will have to get vaxxed or face constant testing.

The CDC has a history of sending mixed messages on masks. And seemed excited – alongside the president – to market vaccines as an alternative to masking up. But the virus doesn't care about our desire to go bare-faced. And with delta on the rise, we're back to needing every tool in the toolbox: masks and vaccines included.

Who's still a real flipping champion...

Simone Biles. Today, the Olympic gymnast has withdrawn from Thursday's individual all-around competition at the Tokyo Games to focus on her mental health. She was set to defend her Olympic title after winning four gold medals at the 2016 Olympics – which made Biles a household name. And has impressed the world as she's tried (and nailed) hard stunts – putting our cartwheels to shame. But the "weight of the world" and pressure to earn more gold became too much. Yesterday, Biles dropped out of the women's team gymnastics finals after her vault stunt didn't go as planned. Citing concerns for her mental health. And said she couldn't "jeopardize" her health and that "we have to protect our mind and our body." Team USA still showed up, winning silver. Now, Biles will be evaluated daily to see if she will participate in the individual event finals next week.

PS: GOAT or not, we're all human. Here's how Biles, Osaka, and other Olympians are working to break the stigma around mental health, and how you can address your own mental health challenges.

The Capitol attack. Yesterday, four police officers took the mic in the first House panel hearing on the deadly Jan 6 insurrection. Each officer detailed the physical and verbal abuse they endured when a mob of Trump supporters scaled the Capitol building and broke in. One DC officer said he heard threats like "kill him with his own gun." Another called the rioters "terrorists." A Capitol Police officer said he may need more than a year of rehab after he was beaten with a flag pole. The emotional hearing could be the most detailed public account of what officers went through. Lawmakers on the panel applauded the officers' heroism. Now, the House could try to subpoena former President Trump or other members of Congress to testify.

Georgia. Yesterday, the man accused of killing eight people – including six Asian women – at Atlanta-area spas was in court. And pleaded guilty to four counts of murder. The March shooting rampage sent shockwaves throughout the Asian American community and the nation. It also came amid a surge of anti-Asian hate crimes. Now, as part of a plea deal, the gunman received four life sentences without parole, instead of the death penalty. But still faces four more murder charges in a different county, which could result in the death penalty.

"Love Is Blind: After the Altar."