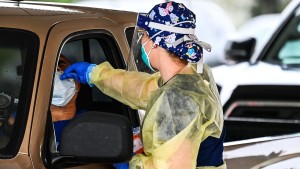 Delta has a lot of people worried – and asking questions.

I'm vaxxed. How worried should I be?

No shot is 100% effective. But the chances of infection when vaccinated are much lower (think: potentially 50-60% less likely). That still means breakthrough infections happen, with an estimated 35,000 symptomatic cases in the US each week.

How serious are those cases?

Only about 0.004% of vaccinated people got a breakthrough case that required hospitalization. An even smaller percentage ended in death. Most infections for those who've been vaccinated are mild or asymptomatic – but some can be flu-like.

What about "long COVID"?

As Dr. Anthony Fauci is reportedly warning: it's still possible to get it. One study found about 19% of breakthrough cases experienced long-haul symptoms.

How can I up my protection?

Masks...are a helpful added layer of protection. Cloth masks can reportedly filter out 20% or more of virus particles. N95s and KN95s filter out even more.

Outdoors...can help too. The large majority of known cases have been traced to indoor transmission.

Testing, testing...is another layer. Over-the-counter tests can go for about $10, $30, or more – and can be 90% or more effective at detecting the virus. Here's where to find a free test near you.

What about the kids?

Kiddos under 12 can't get vaxxed. But that could change in the fall. Data shows children have made up about 14% of all US cases. More than 300 have died from COVID-19. And made up 0.00%-0.26% of states' reported COVID-19 deaths. One study found that less than 5% of kids with symptomatic COVID-19 had symptoms longer than four weeks. Limiting your own exposure can help protect them.

What about those who are immunocompromised?

They should take the same precautions as unvaxxed people, even if jabbed. Some countries like Germany and France are telling them they can roll up their sleeves for a booster shot soon. But yesterday, the WHO asked countries to 'hold the boosters' until next month amid vaccination disparities. One analysis found that about 1% of people in low-income countries have gotten at least one dose.

I'm traveling and have big gatherings this summer. What should I do?

Look into it: will you be in a high transmission area? Is the event indoors or outdoors? The guest list: are they vaccinated or immunocompromised? Depending on your answers, you'll want to consider your options for rescheduling, canceling, or wearing a mask and social distancing.

Good news: in one study, less than 1% of those who've had a severe case got it again. So far, it looks like those who do test positive again may have milder symptoms.

What about people who are unvaccinated?

We're not going to sugarcoat it: they can be extremely at risk. The vaccines overwhelmingly prevent severe illness, hospitalizations, and death – including for the delta variant. Get the facts. Get the vax.

The delta variant is raising concerns. But thankfully, this variant continues to be vulnerable to vaccines – something people around the world wish they could have access to. Stay safe.

PS: We talked with US Surgeon General Dr. Vivek Murthy about delta. Check out our interview here. And subscribe to listen to our convo on "Skimm This," dropping tonight at 5pm ET.

Mexico. Yesterday, the country sued a group of US gun manufacturers, accusing them of negligent marketing, sale, and distribution of guns to Mexican drug cartels. Mexico said that the "deadly flood of military-style" weapons over the border – reportedly over 2.5 million over the past decade – has victimized Mexican citizens and the gov. And that at least 70% of guns trafficked come from the US. Now, amid a high homicide rate, Mexico wants these companies to take responsibility. It's believed to be the first time a foreign gov has sued US gun manufacturers. The companies have not responded.

Where people are outraged...

India. This week, hundreds of people have protested in Delhi over the alleged rape and murder of a 9-year-old girl. On Sunday, the girl – who was from India's lowest caste – reportedly went to get water at a crematorium but never came home. A priest said she had been electrocuted. But the family has accused the priest and three others of raping and killing her. Police have arrested four men. But protesters are calling out India's caste-based social hierarchy: the system, abolished in 1950, can still determine Hindus' place in society, from where they can work to who they can marry. The Dalits – the caste of the victim – have experienced discrimination, sexual violence, and assault. And many are seeing parallels to the alleged rape and killing last year of a Dalit teen, which caused nationwide protests. Demonstrators and the Delhi chief minister are condemning the latest alleged attack, calling it "barbaric" and "shameful."

Who's being asked to do better…

The NCAA. A new report says it "undervalues" women's basketball teams and doesn't treat them equally to the men's teams. Surprising...absolutely no one. The org sparked outrage after a video from this year's March Madness tournament showed a bare-bones weight room for the women and a better weight room for the men. In response, the NCAA commissioned a gender-equity review of its basketball tournaments. The results: the org hasn't followed through on its commitment to "diversity, inclusion, and gender equity" in women's basketball. And that it puts more funding and value in the men's program. The NCAA's Board of Governors says it's "wholly committed" to being equitable and working to make changes.

The Grammys. Yesterday, the Recording Academy announced that the 2022 awards show will be produced with an inclusion rider – aka the fine print in a contract that helps ensure diversity. In recent years, the Grammys, Oscars, and Golden Globes have gotten flack for lacking diversity. Now the Recording Academy is saying 'we hear you.' It'll require Grammy producers to audition, interview, and hire people who've been "historically and systematically excluded from the industry." The academy's president and CEO called it a "monumental step" for the music community.