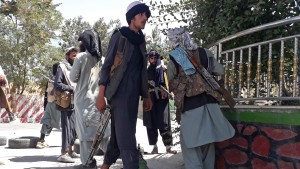 Afghanistan is on the verge of collapse.

In 1996, the Taliban – an Islamist militant group – rose to power in Afghanistan and took control of the capital, Kabul. Under their rule, women's rights crumbled and girls were banned from school. Music and TV were prohibited. After 9/11, the Taliban shielded al-Qaeda's leader (and mastermind behind the attacks) Osama bin Laden. And refused to hand him over to the US. The US got boots on the ground and toppled the Taliban gov. But America's longest war was just getting started. Fast forward 20 years, President Biden announced the US military mission in Afghanistan would be over by the end of August. But things have taken a turn.

As US troops make their way home, the Taliban is going on the offensive. The group has made its way through rural parts of the country and staked a claim over nine provincial capital cities, giving them control of an estimated 65% of the country. The violence is forcing thousands of civilians to flee to Kabul. There are reports of people sleeping on the streets in the summer heat and struggling to find food and other basics. It's got aid agencies fearing an impending refugee crisis. And while Afghan leaders are getting their defenses together in the north, US officials fear the group could once again take Kabul within 90 days.

The US has carried out some airstrikes to support Afghan forces in the past weeks. But the US's withdrawal is at least 95% complete (think: nearly all of roughly 3,000 US troops are gone – not including those protecting the US embassy in Kabul). And Biden said he doesn't regret the decision to pull out – instead urging Afghanistan's leaders to "fight for their nation." With leaders on both sides (of the Afghan gov and the Taliban) refusing to see eye-to-eye, peace talks or ceasefires are out of the question. For now. Meanwhile, the Taliban continues to gain ground.

The US is getting ready to end its 20-year-long chapter in Afghanistan. But the situation is spiraling out of control. And it doesn't seem like the end is near for those who are suffering the most: civilians

The CDC. Yesterday, it urged that pregnant people get the COVID-19 vaccine. Back in April, the health agency said there weren't any "safety concerns" for getting vaxxed while preggers. But had stopped short of a full recommendation. Now, the CDC's put out a PSA after new data suggested that unvaxxed pregnant people could get severely sick from COVID-19. Only 23% of pregnant people have received at least one COVID-19 jab. But the CDC affirmed that there's no increased risk of miscarriage or evidence of fertility problems from getting pricked.

California. Yesterday, Gov. Gavin Newsom (D) said the state will be taking attendance on which teachers and staff are vaxxed or not. And that those who aren't would have to get tested weekly. It's the first state to roll out such a requirement. It comes as other schools (including in Florida and Texas) take on their governors for banning mask requirements. And as new data from the American Academy of Pediatrics shows that there's been a substantial increase in COVID-19 cases among kiddos. Almost 94,000 cases during the first week of August. Now, the Golden State's telling teachers and staff 'you get a gold star' for getting vaxxed.

...Oh and speaking of vaccines, the FDA is apparently on track to authorize a third dose for those who are immunocompromised as soon as today.

PS: If you have more questions about the COVID-19 vaccine, particularly when it comes to your period and/or fertility treatment, we talked to an OB-GYN for answers.

The world. Two days ago, the UN sent out a code red on climate change, saying that every corner of the world's feeling some of its "irreversible" effects. And that things would only get worse. Well, right on cue, enter...

Who's getting a teeny slap on the wrist...

Baylor University. Yesterday, the NCAA ruled that the university didn't violate its rules when it failed to report sexual assault allegations. In 2016, the private university came under fire after 17 women reported incidents of sexual assault involving 19 former football players. It led to the firings and resignations of the university president and football coach, who didn't report the complaints against players. In the investigation, the NCAA did say Baylor's actions were "egregious" and "unacceptable." But that they didn't technically break any rules. (Might be time to change those rules, huh?) Now, Baylor's weaseling out of it with a meager $5,000 fine. And four years probation

Who's a real Funny Girl…

Who are Mike Richards and Mayim Bialik.