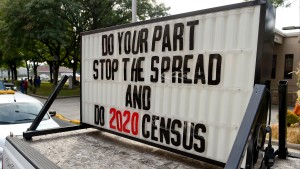 The face of America's looking different.

No filter, please. I want to know it all.

Yesterday, the US Census Bureau rolled out its most detailed results from the 2020 survey. Every 10 years, the US has to take a headcount so it can accurately divvy up annual federal spending. On the line: $1.5 trillion. But the 2020 census had a very 2020 experience, facing several hurdles. Like the former Trump admin wanting to add a citizenship question (it didn't happen). A pandemic delaying the census for several months. And several Supreme Court rulings (see this and this). In the end, about two-thirds of Americans reportedly said 'count me in.' Now, we're learning that America's grown to be more diverse and that many still have big city dreams.

Welcome to America, population 331 million. Where the cities got bigger (hi, NYC, Los Angeles, Houston, and...Phoenix). Where rural areas got smaller. And where Florida's still the place to be for retirement. More Americans identify as multiracial. The Black population grew over 5%. And Asian and Hispanic communities grew by 35% and 23%, respectively. But there are concerns that minority populations were undercounted – some think immigrants might have been fearful of filling it out. And the total white population shrank for the first time. But it still remains the largest demo in the country.

That five states (FL, CO, MT, NC, and OR) will each gain a House seat next year. And because everything's bigger in Texas, it gets two. Seven states (including CA, IL, and NY) are losing one House seat each. All of this could affect Electoral College votes in the 2024 presidential election. Now, state officials are bringing out their pens and papers (and inner Steve Kornacki) to begin redistricting – redrawing district boundaries in time for the 2022 midterms. It could lead to gerrymandering. That's especially relevant this year, because House Democrats have a very narrow majority, and any loss could impact President Biden's agenda. The whole process has already triggered lawsuits from Democrats who want to make sure there's no funny business. And more could be on the docket.

America's 10-year check-in's showing that it's even more the melting pot it's always been thought to be. But its changes set the stage for a political showdown that could have long-lasting effects – potentially impacting the cities and demos that have grown in the past decade.

Who's having some people roll up their sleeves again…

The FDA. Yesterday, it said some immunocompromised people can get a third dose of either the Pfizer or Moderna COVID-19 vaccine. The announcement comes amid the delta variant's spread. And amid concerns that people with weakened immune systems (think: organ transplant recipients or patients with certain cancers or illnesses) may need extra protection. Now, some of the roughly 3% of immunocompromised US adults will have the green light to get an extra shot. Not that everyone needs it: the CDC estimated this week that over 1 million people have already gone rogue and gotten a third dose.

What's happening in the legal world...

Vaccine mandates. SCOTUS just gave the green light to Indiana University's student vaccine mandate. In June, eight students sued saying the mandate was unconstitutional. Lower courts ruled with the school. But the students filed an emergency request – making its way to Supreme Court Justice Amy Coney Barrett's desk. Barrett turned them down but didn't give a reason. It's the first time the justice has had a chance to look at if public and private schools can legally require vaccinations. The students reportedly said they were "disappointed" and are looking for other ways to avoid getting the jab.

Evictions. Yesterday, a divided SCOTUS lifted part of New York's eviction ban handing a win to a group of landlords. Last year, NY law said that landlords were not allowed to evict tenants who haven't paid their rent because of financial hardship caused by the pandemic. And that the tenants could 'self-certify' that they were struggling financially. Landlords said it violated due process because they couldn't challenge their tenants' certifications. SCOTUS agreed and is lifting the self-certifying part of the law. But it kept another provision that protects renters if they can prove financial hardship due to the pandemic. Now, NY's Lt. Gov. Kathy Hochul (D) is saying 'back to the drawing board' and that she'll work with lawmakers to strengthen the eviction moratorium.

Afghanistan. Yesterday, the Pentagon said it was sending 3,000 troops to help evacuate diplomatic personnel from the US embassy in Kabul. It comes as the Taliban's quickly gained ground in the region, taking at least 12 provincial capitals in about a week. That includes Kandahar and Herat, the country's second- and third-largest cities. Kabul could fall within 90 days. The US's withdrawal was already at least 95% done. But with the Taliban's rapid and extensive advancement, officials say sending troops is the "prudent" thing to do. One official's saying 'I know what you're thinking' – and reportedly reaffirmed that the US still expects to fully withdraw by the end of the month.

Who seems to have read the room…

Jamie Spears. Yesterday, lawyers for Britney Spears' father filed paperwork stating he'd agree to step down as the conservator of his daughter's estate. Since 2008, Spears' dad has controlled much of her personal life, career, and finances. Her lawyers have been trying to remove him since November. Earlier this summer, Britney testified about her life under the conservatorship. That includes allegedly being forced to work against her will, banned from driving, and prevented from getting her IUD removed. But a judge denied the request. Now, Spears' father is deciding to step down, saying he's been the "target of unjustified attacks." The court filing doesn't say when that will happen. Just that he would do it "when the time is right."

What's continuing to raise the alarm…

Anti-Asian hate. Yesterday, a new report by Stop AAPI Hate found that there's been over 9,000 reported cases of anti-Asian incidents since the pandemic began. For months, Asian Americans and Pacific Islanders have dealt with an uptick in hate incidents and acts of bias, in part a reaction to the racist association of COVID-19 with people of Asian descent. Activists, lawmakers, and communities have tried to push back against the attacks. And President Biden signed the COVID-19 Hate Crimes Act, providing grants to law enforcement agencies to better investigate the incidents and ordering that the Justice Dept prioritize anti-Asian hate crimes. Now, advocates reportedly say that as the economy has opened up and people are out and about more, Asian Americans have increasingly experienced violence and threats.

PS: We spoke with Stop AAPI Hate co-founder Manjusha Kulkarni about her organization's impact following spikes in hate incidents across the US. And you can take action yourself by learning to be an ally against racism.

Who's worth the social jet lag...