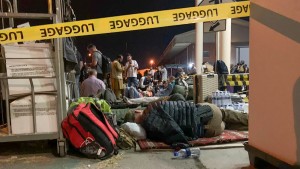 Thousands of people are desperately trying to get out of Afghanistan.

Earlier this week, the Taliban seized Kabul, the country’s capital of about 5 million people. The rapid takeover left the world stunned. That includes the thousands of Afghans who fled their homes and believed that Kabul – a city with US troops and western presence – would be a safe haven. But when the Taliban took control of the city, thousands of Afghans rushed to Kabul’s international airport, where international evacuation flights were taking off. And things quickly spiraled into chaos.

Crowds stormed past security forces. Hundreds flooded the tarmac, trying to get on departing planes – including a US military jet. At least seven people died amid the chaos. Some reportedly fell from mid-air. Land border crossings are apparently under the Taliban’s control and banks closed throughout Kabul. But many are still trying to escape via flights. And have been trying to get passports and visas. Canada, Albania, and Kosovo are accepting refugees. And in the US, the Pentagon’s reportedly looking to house refugees in Wisconsin and Texas. But amid embassy closures, thousands are still struggling to get to safety.

The US is working to get up to 30,000 Afghans under the special visa program out of Kabul. But US lawmakers are calling for more, and pleading with the Biden admin to speed up the evacuation of US citizens and Afghan allies. Many were still baffled by the admin's unpreparedness. (Think: Even during the fall of Saigon, US helicopters landed every 10 minutes and evacuated over 7,000 people in less than a day.) But President Biden doubled down on the withdrawal decisions...and the timeline. Despite the “gut-wrenching” situation, Biden said the US shouldn’t defend a country that isn’t “willing to fight” for itself. And said the Afghan gov worried that pulling out earlier would've triggered a "crisis of confidence.”

The Taliban's rapid return has shocked the world. Many Afghan civilians are pleading for help. And women in the region fear dangerous and uncertain futures – where their last 20 years of advancement and freedoms are at stake. Here's how you can help.

The Colorado. Yesterday, the federal gov declared a water shortage at Lake Mead for the first time ever. Located on the Colorado River, it’s the country’s largest reservoir by volume but has seen a decline for decades. Climate change and a long-lasting drought have brought down the water level to a record low. The declaration allows officials to cut down the water supply to states like Arizona, Nevada, and California. And is expected to affect 40 million people. The cuts go into effect in January. Gov and local officials say the decision is the latest reminder for Americans on the impacts from climate change.

Tesla. Yesterday, federal safety regulators said they’re investigating the electric-vehicle company’s Autopilot system after a series of crashes. The National Highway Traffic Safety Administration said it knows of 11 incidents since 2018. Regulators hadn't really looked into driver-assistance tech (like Autopilot). Now, they're telling companies 'let us know when an accident happens.' And the investigation is rolling through the system in nearly 765,000 Teslas. Tesla CEO Elon Musk hasn’t responded to the probe, but has repeatedly defended Autopilot.

What’s getting an upgrade…

SNAP. Yesterday, the Biden admin announced it’s expanding federal food assistance – with average benefits seeing over a 25% boost above pre-pandemic levels. It’s the largest single increase in the program's history. It’ll start in October and impact the 42 million people (about 1 in 8 Americans) currently using the program. The average monthly benefit per person was $121 before the pandemic and will increase to $157. While the change may seem small, supporters say the bump could reduce hunger and improve health and nutrition for many families. But critics say the boost (expected to cost about $20 billion more a year) doesn’t motivate Americans to find work.

Bob Dylan. Last week, a woman filed a lawsuit alleging that the singer-songwriter sexually abused her when she was 12 years old in 1965. The woman, now 68, was identified as JC.  The lawsuit came one day before the New York Child Victims Act was set to expire – something lawyers said gave her the opportunity to file. She claims Dylan “befriended and established an emotional connection” in order to abuse her over a six-week period. And that he used drugs, alcohol, and threats. Since then, she’s been “emotionally scarred and psychologically damaged.” Dylan’s spokesperson denied the claims and said he will be "vigorously" defended.

Who’s reminding us to dust our shoulders off…

Lizzo. Earlier this week, she addressed hateful comments people made after the release of her new song, “Rumors,” with Cardi B. The three-time Grammy winner said people made “fatphobic” and “racist” remarks about her. And that while she doesn’t usually let these comments affect her, sometimes they do hurt her. Because, she’s human.

PS...Fatphobia has become a public health problem. In our new guide on fat stigma, we hear from experts about how society got here, and break down topics like the "fat acceptance" movement, "thin privilege," and "body positivity."

Who’ll be stepping off the field…