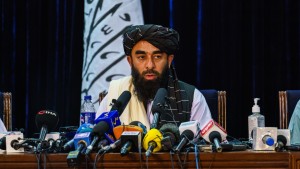 The Taliban is trying to rework its image.

Not many. Yesterday, the Islamist militant group held its first press conference since taking control of Afghanistan. Their spokesman tried to convince the world that they've changed since they last held power in the '90s. The group promised to respect women’s rights...within its strict interpretation of Islamic law. And that women can go to school and work...within that same “framework.” And while the Taliban wants a free press...it doesn’t want reporters to work “against national values.” They’re saying ‘forgive and forget’ to those that opposed them or helped the US (like diplomats and Afghan allies). But many Afghans – especially women – are skeptical.

Do you blame them?

Nope. Many are still terrified of a regime that used public stonings, amputations, rape, and forced marriages to control them (more on that here). Now, women have virtually disappeared from the streets of Kabul. The prices for burqas have reportedly skyrocketed. One of Afghanistan's first female mayors said she's waiting for the Taliban to "come for people like me and kill me." It comes as a UN rep reportedly said the group has already started “house-to-house" searches for people on its target list. One women’s rights org called on the Biden admin to get Afghan activists and their families out of the country.

How is that going?

Not great. The US estimates that anywhere from 5,000 to 10,000 Americans are still in the Kabul area – not including the thousands of troops that are already there. And the tens of thousands of Afghans who helped US troops throughout the war. The Pentagon hopes to move between 5,000 to 9,000 people out of Kabul per day. But tens of thousands are still seeking refuge. The Biden admin has reportedly ordered 1,000 troops to Qatar – where hundreds of Afghans have been transported – to help process visa applications.

With the Taliban back in power in Afghanistan, women's rights and safety are at risk. The Taliban says they've changed. But as the rush to leave the country shows, few are willing to stake their lives on it.

PS: When the Taliban last held control of Afghanistan, the impact on women was devastating. Here's what their return could mean for women now.

The US. New COVID-19 cases are at the highest level since winter. The number of average weekly deaths reportedly doubled earlier this month. But the country's still divided when it comes to staying safe. Florida's investigating two school districts for requiring masks. Even after nearly 9,000 students and staff from Hillsborough County Public Schools had to go into isolation after either testing positive or coming in contact with someone who did. And in Texas, staunch mask critic Gov. Greg Abbott (R) tested positive for COVID-19.

...Oh and speaking of COVID-19, New Zealand is in a nationwide lockdown after the country confirmed its first COVID-19 case since February.

Haiti. The death toll from Saturday’s 7.2 magnitude earthquake is now at least 1,941 people. More than 9,900 others are injured. The massive earthquake has left the Caribbean island reeling – overwhelming hospitals. Tropical Storm Grace has hampered search and rescue efforts. And left survivors struggling to keep safe in shelters. The US has pledged its support, sending helicopters to help deliver resources. It all comes as UNICEF has estimated that the earthquake has affected about 1.2 million people in Haiti, with many families separated, in need of shelter or struggling for access to clean water and health care.

PS: Haiti is no stranger to powerful earthquakes. Here’s why they’re common.

Whose cart is bigger…

Amazon’s. It’s now apparently the world’s top retail seller outside of China. Thanks in part to stay-at-home Americans shopping from home, Amazon's now topped Walmart by about $44 billion. Jeffrey Bezos, you did it.

...Oh and speaking of shopping, US retail sales dropped over 1% last month as government stimulus checks came to an end.

PS: We Skimm'd ways to shop smarter online – and be kinder to Mother Earth in the process.

Maki Kaji. Last week, the “Godfather of Sudoku” died at age 69 from cancer. He was known for creating the popular 1 through 9 numbers puzzle. And dedicated his life to spreading joy through puzzles.

Who are proud dads…