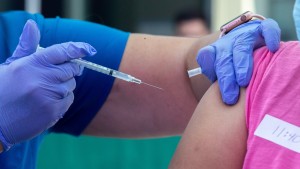 Americans are gonna need a boost against COVID-19.

Coming right up. Over 168 million people (51% of the total population) in the US are fully vaxxed. But it’s unclear how long that protection lasts. And contagious variants like delta have entered the chat – making up over 98% of new cases, driving up hospitalizations, and adding to breakthrough infections. Vaccines are still highly effective against preventing severe illness and death. But the CDC data’s showing "very clear" signs that immunity from vaccines is waning over time. Especially when up against delta. Now, in order to “stay ahead” of the variant, health leaders are calling for another round of shots.

Don’t roll up your sleeves just yet. For now, the CDC's saying some immunocompromised individuals (think: those undergoing cancer treatments or with advanced HIV) get first dibs. Starting the week of Sep 20, a booster shot will be available for those who've gotten Pfizer or Moderna. As long as it's been eight months since their second dose. And they’ll likely need the same brand. (So, no switching teams.) Just like the first round of shots, health care workers, the elderly, and those with pre-existing conditions are high priority. But J&J’rs will have to wait until there’s more data on boosters for non-mRNA vaccines.

That’s the plan...but the FDA and CDC’s panel of advisors still have to give boosters the go-ahead. That could happen in the coming weeks. But the World Health Organization’s not happy about it, saying poorer nations need first doses in before wealthy countries can go in for thirds. The US says it's already spreading the vaccine wealth. And that the extra dose would help “maximize” Americans’ protection. It comes the same day that President Biden said nursing home staff must get vaccinated – or risk losing federal funding.

This virus is evolving. And with signs that our best defense – vaccines – could weaken over time, the question now is how best to allocate the remaining jabs. The goal: to protect people from the worst this virus can wreak...and prevent the virus from mutating.

Where the world's still watching…

Afghanistan. Yesterday, the Taliban cracked down on protesters in the northeastern city of Jalalabad, reportedly killing three people. Earlier this week, the Islamist militant group took over Afghanistan’s capital city, Kabul, as the US withdrew its troops. The protests came a day after the Taliban said it would protect women’s rights and tried to show the world its legitimacy. But many are still wary of a regime that's used violence against its people – especially women. In protest, hundreds of Afghans reportedly marched, shouted, and flew flags of the Afghan Republic. Taliban fighters fired into the air to break up the crowd but it didn’t work. Then things turned violent. The Taliban attacked protesters and journalists. And reportedly beat Afghans trying to get to the Kabul airport where some 4,500 US service members are securing the area.

R Kelly. Yesterday, the singer’s New York trial on his alleged sex crimes kicked off. It's the second time he's facing trial – the last ending in an acquittal of child pornography charges in 2008. After decades of accusations, Kelly’s facing charges for racketeering, sex trafficking, and forced labor, among others. Kelly pleaded not guilty. If convicted, he faces 10 years to life in prison. Here’s how things played out yesterday:

T-Mobile. Earlier this week, the cellphone carrier said hackers stole the private info of over 40 million current, former, and prospective customers. The hacking included people’s first and last names, Social Security numbers, and info on driver’s licenses. But no phone numbers, account numbers, or passwords were taken. T-Mobile said it “immediately closed” the loop that the hackers could access. But breaches for T-Mobile aren’t new. (See this, this...and this). But it wants to make things right, saying it’ll provide two years of free identity protection to those at risk from this latest cyberattack.

Psst...here's how to protect yourself if your data is exposed.

What’s drifting to a theater near you…