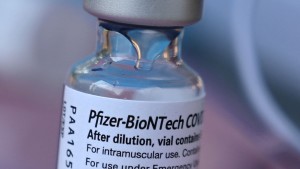 There are three COVID-19 vaccines on the US market: Pfizer's, Johnson & Johnson's, and Moderna's. All three have been greenlighted for emergency use. Meaning, they showed enough efficacy early on to get the provisional go-ahead. Now, after reviewing 340,000 pages of data, the FDA is patting itself on the back for the call.

Pfizer’s clinical trial followed thousands of subjects for at least six months – up from the two months needed for emergency use authorization. The FDA found that serious side effects like heart inflammation were still extremely rare. Also, that efficacy at preventing COVID-19 six months out was 91%. Worth noting: that six-month period wrapped up before the delta variant hit. Delta is believed to have taken a big hit on efficacy.

There are about 85 million unvaccinated Americans eligible to get shots. The Biden admin is hoping the FDA’s endorsement for Pfizer will ease some of their concerns. One poll found that 31% of unvaccinated adults said that the FDA’s full approval would make them more likely to get it. The move could also open the door wider for mandates. Following the announcement, the Pentagon said it’s moving ahead with vaccine requirements for service members. It comes as NYC requires all public school staff to get at least one dose over the next month.

Never before in the history of the FDA has the agency reportedly had this much data to look at when approving a vaccine. Now, as delta wreaks havoc on the country, health officials are hoping the FDA’s stamp of approval will give a boost of confidence to those still hesitant of rolling up their sleeves.

PS: The FDA’s approval could mean your workplace will require a COVID-19 vaccine. Wondering if it’s legal? The short answer: yes.

Where all eyes are focused…

Afghanistan. Yesterday, the Taliban warned of “consequences” if the US stayed past the end of the month. August 31 was the most recent date the Biden admin gave for when it would end its military mission. But then the Taliban took over Kabul last week, and the admin called in backup (think: more troops) to help evacuate thousands of Americans and Afghan allies. The Taliban threat came after President Biden said Sunday he’s in talks with military officials about potentially staying past the end of the month. But a Taliban spokesperson says the move would “create mistrust” and “provoke a reaction.” It all comes amid...

What’ll have you cheering…

The Tokyo Paralympics. The sporting event for athletes with disabilities kicks off today. Over 3,500 athletes will compete across 540 events – including badminton and taekwondo for the first time ever. At least 28 LGBTQ+ Paralympians will be vying for medals – a record. Medalists Chuck Aoki and Melissa Stockwell will be the US’s flag bearers during the opening ceremony at 6:55am ET. Plus, get to know these athletes. The games run until Sep 5. Stay tuned here.

Who’s saying ‘that’s governor to you’...

Kathy Hochul. Today is her first official day as the first female governor of New York. And she’s bringing women into leadership positions with her. Meet Karen Persichilli Keogh and Elizabeth Fine.

While Buckingham Palace is bringing back the Changing of the Guard...

Starbucks also knows to give the people what they want.

While Joséphine Baker’s making history at the Panthéon in Paris…