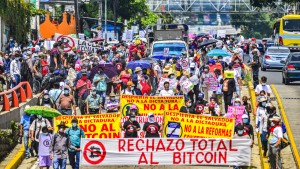 That’s the opposite of itty bitty news.

It’s historic. In June, Salvadoran lawmakers passed a law requiring businesses to accept bitcoin for goods and services (anything from buying coffee to paying taxes). And set up a process to convert the digital money into US dollars (El Salvador’s currency since 2001). The country's reportedly investing over $225 million on the move – setting up 200 bitcoin ATMs and a gov-run digital wallet called Chivo (“cool” in Salvadoran slang), as well as offering a $30 bitcoin credit to those who sign up for Chivo. The gov hopes the volatile crypto will eventually be a success and boost the country's fragile economy. But things haven't gone as planned.

Bitcoin Day – the official rollout for the new currency – went through a massive buffering period. The digital wallet (where people store their cryptocurrency) didn’t initially show up on the major app stores. Meaning, people couldn’t sign up to get the credit the gov promised. The gov said it had temporarily taken down the digital wallet to deal with demand. Meanwhile, protests quickly erupted against the crypto. What was meant to be a way for Salvadorans without bank accounts to access money, quickly became an hours-long fiasco. The market wasn’t playing ball either. Bitcoin’s value dropped by as much as 17% yesterday.

Not everyone agrees. Critics like the IMF say the crypto could hurt the country’s economy – one of the poorest in Latin America – and worsen its problems with social inequality and high crime rates. Also, some fear it'll turn the country into a “money-laundering paradise” for gangs who’ll be able to convert their bitcoin into dollars. Others say this is all a distraction from President Nayib Bukele's power grab (see: this and this). But Bukele maintains it'll help Salvadorans in the long run – especially the 70% without bank accounts, and those looking to save money on remittance fees. Around the world, crypto fans are backing El Salvador by buying $30 worth of the coin.

El Salvador is leaving its mark on the crypto world, and hopes that bitcoin will help give the country a much-needed economic boost. But governments around the globe will be looking to see how the country’s gamble plays out and pays out, before making any moves.

PS: Volatility is nothing new for crypto investors. If you’re thinking about jumping in, we made you a decision tree to help you figure out if it’s a good idea.

The Taliban. Yesterday, the militant group announced who's taking the helm as part of Afghanistan's interim gov. The move comes weeks after it took over Kabul and days after it claimed the capture of Panjshir – the last remaining province not under its rule. In the new gov: senior Taliban figures including Mullah Mohammad Hassan Akhund – who’s blacklisted by the UN –  as interim prime minister. And FBI’s most-wanted Sirajuddin Haqqani – leader of the Haqqani network (a US-designated terror group) – as acting interior minister. The Taliban says it’ll announce a permanent gov soon...but the US isn't planning to recognize the new gov for now.

PS: As we near the 20th anniversary of the 9/11 terror attacks, we’re breaking down the history and impact of the US-Afghanistan war.

Why people are keeping an eye on Mexico…

An earthquake. Last night, a powerful 7.0 magnitude quake hit the southwest part of the country near Acapulco. It caused buildings to shake in Mexico City – about 230 miles away. About 1.6 million people are without power. And at least one person was killed.

Abortion rights. Yesterday, the country’s Supreme Court ruled that criminalizing abortion is unconstitutional. Mexico is home to the world's second-largest Catholic population. And only four states (Oaxaca, Veracruz, Hidalgo, and Mexico City) have legalized abortions. Now, the Supremes' decision could pave the way for more states to make abortion available. And the move comes as the women's rights movement has gained popularity there in recent years.

Which court cases are making headlines...

Britney Spears' conservatorship case. Her father, Jamie Spears, has filed to end her 13-year-long conservatorship. For over a decade, Jamie has controlled much of his daughter's career, finances, and personal life. Earlier this year, Britney testified about her life under the conservatorship – alleging she was forced to work against her will, among other things. Now, her father is trying to put an end to the arrangement, saying he wants “what is best for his daughter.” The pop star's lawyers called the petition a “legal victory.”

Elizabeth Holmes' fraud case. Today, the founder of Theranos (a blood-testing tech startup) is expected to go on trial over allegations that she defrauded investors and patients. Opening statements are scheduled to start today and the trial could last several weeks. We Skimm'd what you need to know about Holmes, Theranos, and the case.

While Dr. Jill Biden's back at school…

Steve from "Blue's Clues" is back in our lives.