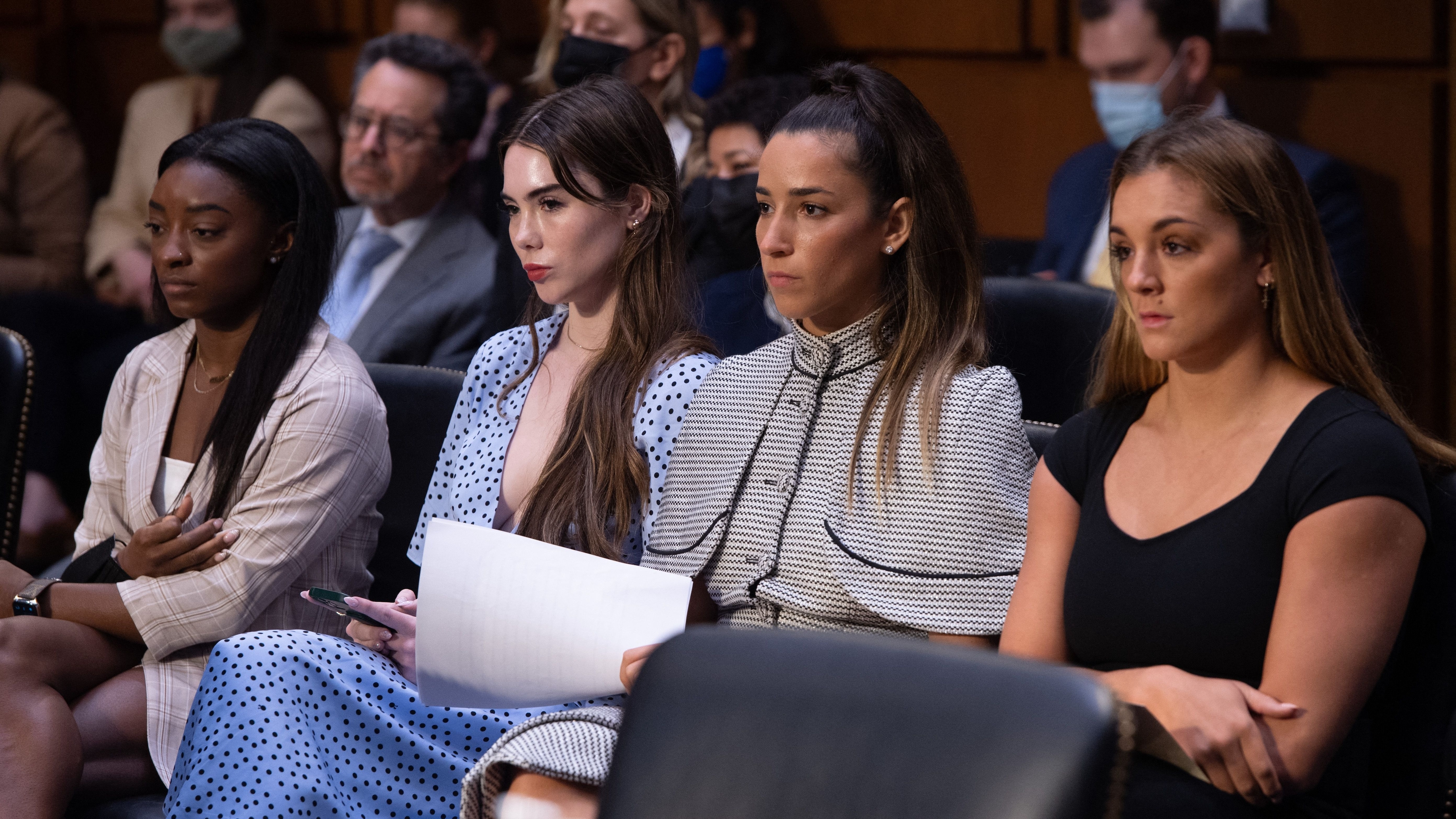 They Have The Floor

Elite gymnasts are speaking out.

In 2015, USA Gymnastics officials reported allegations of sexual abuse against doctor Larry Nassar to the FBI. Over 150 girls and women – including athletes – came forward, saying Nassar abused them under the guise of medical treatments. He was sentenced to up to 175 years in prison nearly three years later. But now the focus has shifted to the FBI's handling of the case. Especially after a DOJ investigation found that "numerous and fundamental errors" at the FBI Indianapolis field office allowed Nassar to continue his abuse for months. Yesterday, four US gymnasts – Simone Biles, McKayla Maroney, Aly Raisman, and Maggie Nichols – took the mic to tell their story in front of the Senate Judiciary Committee.

That the FBI failed them. In 2015, Maroney said she recounted her abuse in graphic detail to an FBI agent – who responded "Is that all?" before failing to report the abuse for 17 months. And when the report was created it included "entirely false claims" about what she'd told them. Nichols – who’s referred to as “Athlete A” – called the FBI’s conduct “unacceptable, disgusting, and shameful." Raisman said FBI agents made her feel like her abuse "didn't count." And claimed their delay caused innocent children to be served "to a pedophile on a silver platter." (Note: Nassar allegedly abused at least 70 young athletes while the FBI did nothing.) Biles said the FBI "turned a blind eye" to the gymnasts and their abuse. And that she doesn’t want anyone else to "experience the horror" that she and others went through.

Has the FBI responded?

FBI Director Christopher Wray apologized, saying the former FBI investigators' actions were "totally unacceptable." And confirmed that the bureau fired one agent involved in the botched probe. While another retired in 2018. Neither were prosecuted for their mishandling of the case. Now, Wray says the bureau has started implementing the IG’s recommendations to make sure this never happens again. That includes training to report abuse and changing their policies and procedures on allegations of sexual assault. But politicians weren't impressed – both sides of the aisle united to condemn the FBI's failures. And more testimony could be on the way since top Justice Dept officials haven’t testified yet.

The Larry Nassar case shined a light on how powerful people can systemically cover up their sexual abuse. And how women are forced to fight – from school officials to the FBI – for the world to believe them.

What lit up the sky….

SpaceX. Yesterday, Elon Musk’s space company made history after its all-civilian mission launched from Cape Canaveral, Florida. This year, the space race among billionaires has taken off with Richard Branson and Jeff Bezos lifting off. Now, this mission (dubbed Inspiration4) sent four ‘regular’ people into orbit. Including a physician assistant (and cancer survivor), a geoscientist, and a US Air Force veteran. Jared Isaacman, the billionaire who purchased the flight to help raise money for childhood cancer, is leading the crew. They will be flying higher than the International Space Station – the farthest any human has gone from Earth since 2009. The crew will carry out experiments on human health (think: studying balance, running blood tests) during their three days circling the Earth. And are expected to splash down in the Atlantic Ocean on Saturday.

Where there are growing calls for reform…

Colorado. Yesterday, state AG Phil Weiser said the Aurora Police Dept was found to have a pattern of racially biased policing. The claim stems from a civil rights probe – brought against the dept after Elijah McClain's killing. Three police officers and two paramedics are currently facing charges for putting the 23-year-old Black man in a chokehold and injecting him with ketamine, killing him. Now, Weiser’s saying McClain’s death is part of Aurora PD's “unacceptable” culture. He said officers showed a pattern of disproportionately arresting and using excessive force against Black Americans. Weiser called on the dept to train officers and change how it conducts stops and arrests. Aurora PD said it will work with the AG to “implement necessary and sustainable changes.”

Where COVID-19 is raising more alarms…

The US. Earlier this week, the country reached another grim milestone in the pandemic as the COVID-19 death toll topped 663,913 people. That’s roughly 1 in 500 Americans or 0.2% of the US population. It comes as the country has seen a jump in infections amid the delta wave, leaving hospitals swamped. And as the federal gov has announced vax mandates in hopes of controlling the virus. But not everyone’s into it. One New York hospital will pause its maternity ward after some staff said 'no, thx' to the vax.

PS... If you're wondering if your employer can mandate vaccines, we Skimm'd it for you here.

The US Soccer Federation. This week, it offered the same contracts (with identical pay structures) to the men’s and women’s teams. It comes years after two dozen players on the women’s national team sued for equal pay. Way to kick some balls.

While these 100 people are influential...