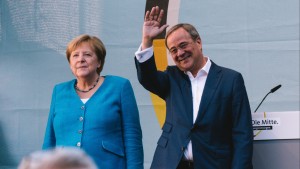 Yesterday, Germans headed to the polls for the country’s parliamentary elections. Big deal, since parliament will decide the next chancellor. And for the first time in 16 years, Angela Merkel isn’t running for the top spot. In 2005, the trained scientist became Germany’s first female chancellor. And she quickly became Europe’s de facto leader. Now, she’s stepping down, saying it’s time “to open a new chapter.” And leaving the top spot open for someone else. But the stakes are high for whoever is elected new chancellor.

Merkel is widely credited with creating a "golden age" for Germany. One which turned the country into an economic powerhouse, opened the door to over 1 million refugees, legalized same-sex marriage, and raised the minimum wage. Merkel can also add 'listening to scientists to combat the pandemic' to her résumé. But some critics don't see Merkel's legacy as a golden one. Many, including Merkel herself, acknowledge Germany could have done more to combat climate change. And while the decision to welcome refugees was lauded by many, the far right capitalized on xenophobia in the country to grow its base, gaining traction in local elections. Whoever takes Merkel's job next has big shoes to fill. And a whole set of issues to address: including the rise of the far right and Germany's growing dependence on China.

And who will be taking the job?

It’s still unclear. Yesterday’s elections turned out to be a nail-biter. But preliminary results showed the win's going to the Social Democratic Party (SPD) – a center-left party led by Germany's current vice chancellor, Olaf Scholz. It edged out Merkel's center-right party with Armin Laschet at the helm. Next on the agenda: forming a coalition gov. In the meantime, Merkel won't be spreading her wings just yet – she'll remain in office as a caretaker until a new gov is formed.

Angela Merkel’s leadership has steered Germany for over a decade. Now, Europe's leading economy is starting a new chapter. And the world's watching to see how it unfolds.

Who’s taking a shot at the shot…

The CDC director. On Friday, Dr. Rochelle Walensky overruled a CDC advisory panel’s recs on booster shots. Last week, the panel determined that Pfizer booster shots could be given to people 65+ and those with underlying medical conditions. But, unlike the FDA, didn’t make a rec for frontline workers. Enter: Walensky, who made an edit and said ‘actually, teachers, health care workers, and others on the front lines need them too.’ Some have criticized the approval of boosters, saying there isn’t enough evidence to show they're necessary. But Walensky defended her decision, saying she didn't overrule the panel but took action to “preserve the health across our nation.” Now, a third dose will be available to 60 million Americans. Here's more on who can qualify.

China. On Friday, the gov banned crypto mining and made all crypto transactions illegal. (Yes, even Bitcoin and Ether.) It comes as China's central bank has been testing a crypto of its own. Some experts think the latest clampdown could be another way for the gov to force citizens to use state-run products (and collect their data – two birds, one coin). But China says it’s just there to protect its citizens from the “hidden risks” of using crypto.

What else is making news in Europe...

Switzerland. Yesterday, Swiss citizens voted to legalize same-sex marriage – making it one of the last western European countries to do so. Since 2007, Switzerland has allowed same-sex civil partnerships. Now, ​​starting next summer, same-sex couples will be allowed to marry and adopt. Critics said it undermined traditional families. But others called it a “milestone” for the country.

Chris Cuomo. On Friday, the CNN anchor – and brother to disgraced former NY Gov. Andrew Cuomo – was accused of sexual harassment. In a published op-ed, Shelley Ross – Cuomo’s former boss at ABC News – said he grabbed and squeezed her butt at a party 16 years ago. And that he allegedly said “I can do this now that you’re no longer my boss.” Ross said Cuomo emailed her an hour later apologizing for his behavior. And that she's not looking for him to get fired, but to get educated instead. Cuomo maintains that he "meant" his apology.

Lewis Hamilton's vrooming to the top.