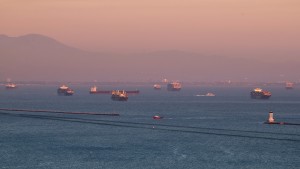 Supply chains are causing quite the freight.

I see what you did there.

It’s all about the delivery. And that’s something a lot of Americans are waiting on right now. When the pandemic struck, factories and ports around the world shut down. That led to supply shortages, including for computer chips. Stimulus checks and WFH encouraged Americans to hit ‘add to cart.’ But high demand and labor shortages have led to backlogs on things like online shopping, medication delivery, and school lunches. It’s all created a perfect storm that’s still unfolding.

The supply chain shortage has contributed to the jacked-up prices all around. Not helping: the USPS cutting back on package and mail deliveries. Yesterday, the Labor Dept said consumer prices increased 5.4% last month from a year ago. Meaning, Americans are already paying more for things like furniture, rent, and food. And now they’re paying (and waiting) more for their package and mail deliveries. With the holidays right around the corner, experts are telling people to do their holiday shopping now. Or, they could risk giving their loved ones an IOU in their stocking.

How can we expedite solutions?

The Biden admin is on duty. And said that the Port of Los Angeles – one of the busiest in the country – will be operating around the clock. And UPS and FedEx (which apparently ship 40% of US packages) are ramping up work hours for employees. (Burnout, much?) But experts reportedly say it’s not enough to address the widespread bottleneck across supply chains. They suggest the admin help boost employment in industries like retail and trucking. And get rid of Trump-era tariffs on Chinese products, which have forced US companies to pay up.

Americans are wishing for a holiday miracle on their package delivery date. But the supply chain problems extend beyond their front porch. And prove the pandemic's had devastating effects on more than just our health.

Psst…our gift to you is this guide on making a holiday budget. Jump on it.

Phthalates. Earlier this week, an NYU study said that exposure to the synthetic group of chemicals could be leading to about 100,000 early deaths per year. The “everywhere chemicals" can be found in makeup, shampoos, and toys. And have been linked to reproductive, brain, and immune system problems. Now, researchers say that they could be connected to thousands of premature deaths among people ages 55 to 64. But that there’s still more research to be done.

A boost in Social Security checks. Yesterday, the Social Security Administration said it’s boosting benefits by nearly 6% next year. Because, inflation. It’s the biggest increase since 1982. Roughly 70 million people receive Social Security. And about four in 10 use it as their primary source of retirement income. Now, most will see their monthly checks bumped up by about $92. But one analysis says that an increase could quickly deplete the program, which is already on its last leg.

Wind power. Yesterday, the Biden admin announced plans to expand wind farms along the country’s coastline. And hopes to lease areas like the Gulf of Mexico and the Gulf of Maine to develop clean, renewable wind power energy by 2025. Interior Secretary Deb Haaland said it would “accelerate the nation’s transition to a cleaner energy future.” But it’s just a proposal and could come across many obstacles, including from fishing groups and landowners living along the coastline.

Suni Reid. Yesterday, the Black transgender actor – and former "Hamilton" cast member – filed a formal complaint against the show. Reid, who is nonbinary, says other performers and managers harassed and intentionally misgendered them for years. And that they were fired from the show after requesting a gender-neutral dressing room. "Hamilton" denied the claims.

The FDA. Yesterday, it released new guidelines in efforts to cut Americans’ average salt intake by about 12% over the next two and a half years. Important, because too much sodium could increase your blood pressure and risk of heart disease.

Psst...If you need a reminder on what sodium and other terms on the nutrition label mean, here's theSkimm.