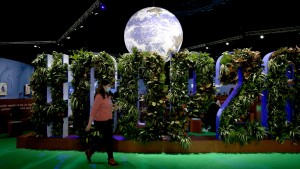 World leaders are in Scotland for another last-ditch attempt at stopping climate change.

Remind me. How many last-ditch attempts do we get?

None. Greenhouse gas emissions need to drop almost 50% by 2030 to avoid the worst impacts of climate change. Guess which direction they’re trending. Even if all countries reach the goals they set for themselves under the 2015 Paris deal, the Earth is set to hit some of worst-case scenarios by the end of the century.

Nope. So here’s what happens now: Reps from around 200 countries are meeting in Glasgow, Scotland, for the 26th session of this meetup. They have 12 days to come up with new promises on how they’re going to step it up. But nationalism is on the rise, two of the worst emitters (China and the US) are at odds, and at least three leaders (from Iran, Brazil, Russia) aren't going. And while the Biden admin could be talking a big talk, a member of the president’s party – Sen. Joe Manchin (D-WV) – has been blocking action in Congress.

Over the weekend, G20 countries (the top 20 economies) agreed to stop funding coal power plants abroad. So, there’s that.

Over 12 days, we are expected to hear a series of promises from a variety of countries. All of those words are meaningless unless we do a complete 180 on climate change, now. The lives and well being of millions of people – many poorer and living near the equator – are on the line.

SCOTUS. Today, the Supreme Court will hear arguments on Texas’s controversial abortion law. In September, the state banned most abortions after six weeks of pregnancy. No exceptions for rape or incest. And gave private citizens the power to sue and enforce the ban. Now, the Supremes are taking up two legal challenges from the Biden admin and abortion providers. The high court has already let the law go into effect once. And isn't considering whether the restriction is unconstitutional. Instead, it’ll decide whether federal courts can even challenge the Texas law. The ruling will give a clue into where the conservative-majority court stands on other abortion cases (like this one). Arguments begin at 10am ET. (Listen here.)

PS: We have a recap of the recent legal battles on abortion rights, plus how it all started here.

The FDA. On Friday, the agency extended Pfizer's COVID-19 vaccine emergency use authorization to children ages 5-11. Since the start of the pandemic, over 6 million kids have tested positive for the virus. Thankfully, they're at a much lower risk for hospitalization than adults. But many parents are still hesitant to get them vaccinated. One thing to remember: the virus was reportedly the eighth leading cause of death for kids ages 5-11 this past year. And with school closings, masks, and quarantines impacting kids socially and academically, many have been waiting for vaccine approval as a way to get back to normal. The good news: The vaccine was found to be 90% effective at preventing symptomatic infection.

...Oh and speaking of vaccines, eyes are on NYC’s 26,000 municipal workers (like police and firefighters) who missed Friday’s deadline to get vaccinated or face unpaid leave. Today, Mayor Bill de Blasio (D) is expected to enforce the rule.

Where city officials are making changes…

Philadelphia. This week, the city’s on track to become the first major US city to end police traffic stops for small violations (think: broken taillight, registration issues, and dangling items from your mirror). Because the supposed 'routine' practice had some fatal results. In the last five years in the US, one report found that more than 400 unarmed drivers or passengers – a disproportionately large number were Black – have been killed during routine stops. Of those hundreds of cases, only five police officers have been convicted. And in Philadelphia, Black drivers accounted for 72% of people stopped (despite making up less than half of the population), according to another report. So the city's putting an end to it. Mayor Jim Kenney (D) is set to sign legislation this week. But it will take 120 days to go into effect. The police department also supports the bill.

Psst…we’ve got an interview with Huma coming out on Wednesday. Subscribe to our podcast “9 to 5ish” to catch it when it drops.