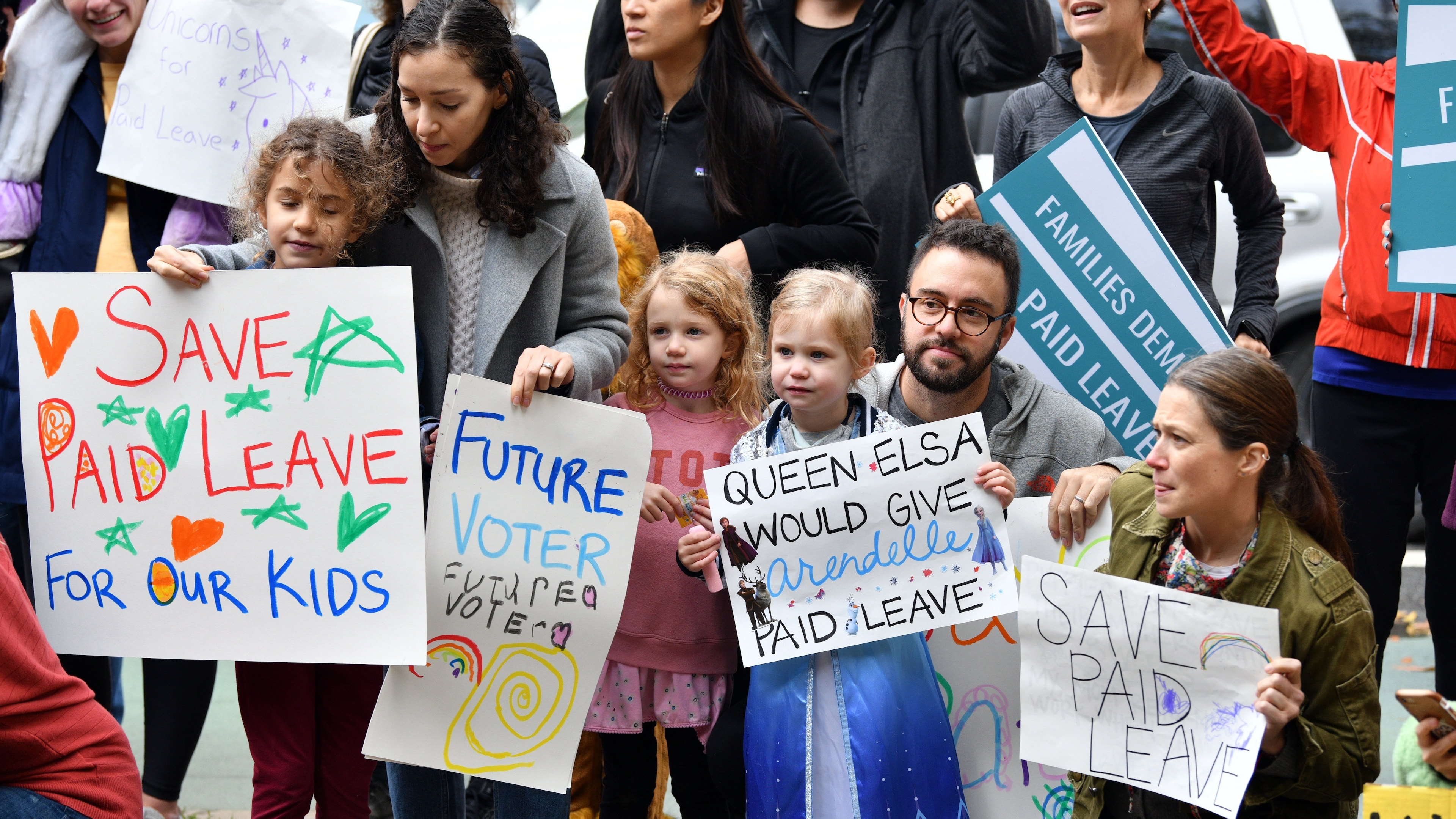 Paid family leave could be back on the table.

It’s a fair question. The US is the only industrialized country in the world that doesn't guarantee paid leave. Federal law guarantees new parents get 12 weeks off...but that leave isn’t necessarily paid. Instead, it’s up to individual states and businesses to decide whether to allow working Americans – healing from childbirth, bonding after adoption, or caring for a sick parent – to engage in caregiving while keeping their salary. It’s no wonder the US is in a caregiving crisis. One that COVID-19 has only made worse. Enter: the paid leave debate.

For months, lawmakers have been debating a $3.5 trillion social spending package that could include everything from universal preschool to climate spending. But Sens. Joe Manchin (D-WV) and Kyrsten Sinema (D-AZ) have pushed back on the price tag. Last week, President Biden announced he was trimming down the bill by half – including taking paid leave off the table. Now, after major pushback, House Speaker Nancy Pelosi (D-CA) says she wants to bring it back. And is pushing for four weeks of paid leave, down from 12.

Let’s talk about that number.

Shall we? It can take at least six to eight weeks to recover from childbirth. During that time, many new parents are learning to feed their babies. And a large portion (think: about one in three births) are recovering from C-sections. Even with the lower number of four weeks under consideration, there’s no guarantee paid leave will pass Congress. Manchin called the news that paid leave was back under consideration “a challenge” and apparently added: “they know how I feel about it.” But at least one lawmaker's had enough of his unyielding opposition, telling him: 'the world doesn't revolve around you.'

PS: Our co-founders and co-CEOs Carly Zakin and Danielle Weisberg are shining a light on how paid family leave, or lack thereof, has an impact on America. Help spread the word by using #ShowUsYourLeave on social media.

What also has national implications…

Voting rights. Yesterday, Senate Republicans blocked another major voting rights bill. The John Lewis Voting Rights Advancement Act – named after the former congressman and civil rights icon – would have restored a key part of the Voting Rights Act of 1965. A provision that SCOTUS struck down in 2013. In August, the House passed a bill to bring it back. But Sen. Lisa Murkowski (R-AK) was the only Republican senator to support it in the upper chamber. And without the votes, the bill couldn’t advance.

...Oh and speaking of voting, two candidates made history yesterday. Meet Winsome Sears (R) – the first woman and first woman of color elected as lieutenant governor of Virginia. And Gov. Phil Murphy (D) – the first Dem governor to get reelected in New Jersey since 1977.

What’s getting a second look…

The Second Amendment. Yesterday, the Supreme Court appeared ready to expand the constitutional right to bear arms. In 2008 and 2010, the Supremes ruled that a person can own a gun at home for self-defense. Now, the high court is hearing a challenge against a New York law requiring a license to conceal carry outside the home. It comes after two NY men sued the state, saying their rejected applications for licenses were a violation of the Second Amendment. During oral arguments, most of the Supremes seemed skeptical about the law. And questioned why local officials have the power to weigh in on a constitutional right. It’s the high court’s first major gun rights case in over a decade. A decision isn’t expected until June.

The Federal Reserve. Yesterday, it said it’ll be pulling off the bandage on the US economy. The pandemic turned the economy upside down, closing down businesses and putting millions out of work. So, the Fed stepped in to buy gov-backed debt (think: mortgage-backed securities and bonds). And let it rain, buying about $120 billion each month to keep the country’s cash flow going. But later this month, the Fed will start buying $15 billion less each month. Federal interest rates will still remain near zero. It comes as inflation is expected to remain high until next year.

PS: Get to know the Fed better and how else it can affect your wallet.

Female condors. Last week, researchers say they found two birds were able to produce a chick without a male partner. All you need is self-love.

Who’s got us believing…