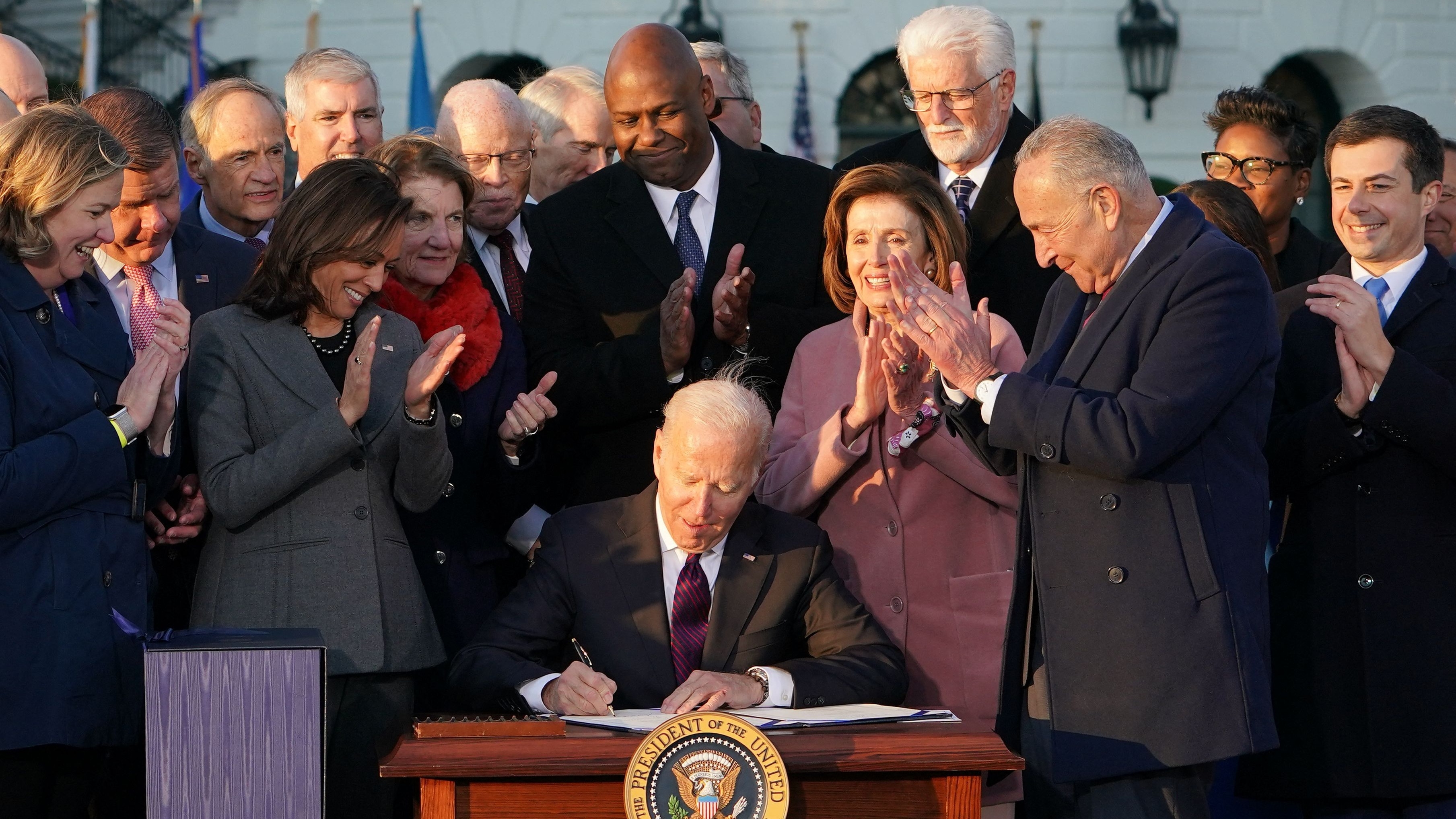 Grab the hard hats, America’s getting some renovations.

A big one. Earlier this month, Congress passed a $1.2 trillion bipartisan infrastructure bill after months of negotiations. Originally, President Biden had proposed a $2.3 trillion plan to revamp the country’s transportation and energy systems. But the price tag came with pushback. So, the admin compromised in hopes of getting the bill over the Hill. It worked. Now, Biden’s officially signed the new bill into law – divvying up funds for the country to get some TLC. It’s the biggest investment in American infrastructure in more than a decade.

Over the next five years, the US will be getting $550 billion in new gov funding (courtesy of things like new tax revenues and unused pandemic funds). Among the investments: $110 billion for roads, bridges, and new projects. $65 billion to give the country’s broadband a boost. And $7.5 billion to give an extra spark to the EV charging industry. The rest of the money (hello, hundreds of billions of dollars) is going toward things like the electricity grid and water systems. Meanwhile, states from California to Michigan to New Jersey already have big dreams for the funds. Think: protecting waterways like the Great Lakes, building new tunnels to ease road congestion, and wildfire prevention. The Transportation Dept (hi, Sec. Pete Buttigieg) could start depositing funds into states’ accounts as soon as next month.

Biden said the new law shows that Democrats and Republicans “can come together and deliver results.” But some Republicans have called out members of their own party for supporting the bill, calling it socialism. Now, Dems are shifting their attention to a separate $2 trillion social spending package, which could include money for paid family leave and climate change (don't forget to recycle). The House hopes to put it to a vote this week. But even if it passes, it faces a hurdle in the Senate – where moderate Dems have squashed previous versions of the measure over its sticker shock. But that's not the only thing giving Congress a headache (see: potential gov shutdown, looming debt ceiling crisis).

One poll found that more than 80% of Americans are in favor of infrastructure upgrades. After months of back-and-forth negotiations, lawmakers have finally found some common ground. It's a win for President Biden and raises hope that lawmakers may be able to compromise on the range of other issues facing the nation.

What everyone is watching…

The Kyle Rittenhouse trial. Yesterday, the judge in the case threw out a weapons charge ahead of closing arguments. Rittenhouse is on trial for homicide after killing two people and injuring a third during a BLM protest in Kenosha, WI, last year. He was also facing a misdemeanor charge of carrying a dangerous weapon as a minor (he was 17 at the time). But Rittenhouse’s attorneys argued that the WI law applied to minors with short-barrel rifles. Aka...not the AR-15-style weapon Rittenhouse used. Now, the judge said ‘I hear you’ and dismissed the charge – which many thought would be a legal slam dunk.

Who deserves an apology…

The families of Sandy Hook victims. Yesterday, a Connecticut court found far-right broadcaster and conspiracy theorist Alex Jones liable in a defamation case. For years, Jones has spread false claims that the 2012 Sandy Hook shooting – which claimed the lives of 20 children and six staff members – was staged. Some of the families of the victims sued Jones for defamation in four separate lawsuits. Including three in Texas, where he also lost. The families argued that Jones profited from the false claims. He has since backpedaled and agreed the shooting was in fact real. Now, juries in TX and CT are set to decide how much Jones should pay the families in damages.

President Biden. Yesterday, he signed an EO in an effort to protect Native Americans against violence. About 1,500 American Indian and Alaska Native people have been recorded missing across the country. And more than 1.5 million Indigenous women have experienced violence in their lifetime. But that's likely an undercount due to racial profiling and systemic racism in law enforcement. Now, the Depts of Justice, Interior, and Homeland Security have less than a year to create a strategy, address specific law enforcement issues, and support Tribal Nations.

PS: Indigenous women and girls are more often reported missing and as homicide victims, compared to women of other races and ethnicities. Here's why.

...Oh and speaking of elections, former Rep. Beto O’Rourke (D-TX) is throwing his (cowboy) hat in the ring for the Texas governor's race.

What "Downton Abbey" fans are saying...

Whose new address is 123 Sesame Street…