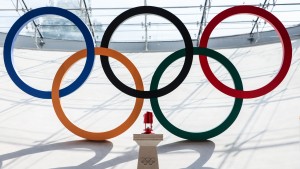 The IOC's guidance on transgender and intersex athletes. Back in 2003, the IOC allowed transgender athletes to compete only if...they'd undergone gender reassignment surgery and at least two years of hormone therapy. Over a decade later, the committee scrapped the surgery requirement but set testosterone limits for athletes who compete in women's sports. Now, the IOC's saying 'maybe we should update that' – three months after the first openly transgender athletes participated in the games (hi, Laurel Hubbard and Quinn). The IOC consulted with athletes, sports orgs, and medical and human rights experts to draft a six-page document to support fairness and inclusion for trans and intersex athletes.

What are the guidelines?

10 principles. Instead of setting the same rules all around, the IOC's recommending a more DIY approach. It's letting each sport’s governing body develop its own eligibility criteria for trans and intersex athletes. But it did share a few guidelines based on "internationally recognized human rights," including: using evidence to determine if an athlete is ineligible or has an unfair advantage. And avoiding unnecessary medical testing or invasive exams. The recs are not legally binding. And could roll out for the next Summer Games.

The IOC says every person has the right to participate in sports "without discrimination." But admitted it hadn't found the perfect solution yet. Athletes are already weighing in. ​​Quinn called the new guidelines “groundbreaking.” But Chelsea Wolfe – a trans BMX Freestyle rider – said “they fall short of a guarantee that discrimination” won’t be allowed. Especially after some transgender and intersex athletes were disqualified from participating in the most recent Olympics because of their testosterone levels. The IOC’s move comes as over 30 states have proposed or passed laws limiting transgender athletes from participating in certain sports teams.

Athletes have been excluded and targeted for pursuing their dreams while trans or intersex. The IOC’s guidelines marks an acknowledgment of the challenges they face – but by punting the issue to others, some say they’re leaving a lot on the court.

PS: Let's talk about what stigma and sports have to do with the LGBTQ+ community's mental health.

Who's giving away a blueprint...

Pfizer. Yesterday, the drugmaker said it’ll allow 95 developing countries to make and sell generic versions of its experimental COVID-19 pill. Paxlovid – which has yet to get FDA authorization – has shown to cut the risk of hospitalization or death by nearly 90% among high-risk adults. It could be a game-changer. Especially, since the global vaccine rollout hasn't been equitable. And the majority of current COVID-19 treatments require an IV or injection. Now, more than half of the world’s population – including those in Africa and Asia – may have access to antiviral pills within months.

What people are still reeling from…

Astroworld. Harris County has confirmed it will not be launching an independent probe into the deadly Travis Scott concert earlier this month. This week, the death toll from the Texas concert rose to 10 after a 9-year-old boy, Ezra Blount, died from his injuries after a massive crowd surge. Hundreds were injured. There are multiple lawsuits and investigations underway to figure out what happened and who's liable. But the spotlight has also been on the Houston police itself, which was involved in crowd control. Some also called for an independent investigation amid reports that Scott has personal ties to the Houston police chief. Now, Harris County's said 'nope, no independent investigation needed.' And that it will handle things internally.

PS: We get into what happened at Astroworld and whether Travis Scott is to blame in our latest ep of “Pop Cultured.”

Who can’t stop adding to cart…

Americans. Yesterday, the Commerce Dept said consumer spending went up 1.7% last month. Even though the US is seeing its highest surge in inflation in 31 years. (Inflation denial, much?) A boost in hiring, pay raises, and savings are helping Americans shop ‘til they drop and substitute at-home cooking with dining out. The crystal ball (aka experts) says the holiday shopping season’s about to have a merry year.

Psst…want more $$$ news? Sign up for our Skimm Money newsletter to get the week’s top financial headlines and tips in your inbox every Friday.

While the hunt for ghosts continues…

Things will be getting magical at Hogwarts. And frisky with Joe Exotic.

Who's got the strongest selfie game in Latin America...