Daily Skimm: The Beijing Olympics, Voting in Texas, and Dictionary.com 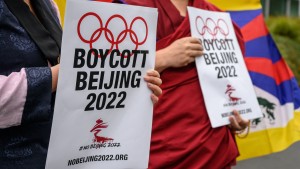 The US is giving Beijing the cold shoulder.

Human rights abuses against the Uyghur population – a minority Muslim group there. Since 2017, the Chinese gov has cracked down on Uyghurs and other ethnic minorities, detaining more than 1 million in its northwest Xinjiang region. There've been reports that Uyghurs have been kept in forced labor camps – and that women have been sterilized. China has denied the allegations, calling them "reeducation camps." Still, earlier this year the US became the first country to call China's treatment of Uyghurs "genocide." And has sanctioned Chinese officials. Now, the Biden admin says it’s pushing against China once again. Yesterday, the admin announced a diplomatic boycott of next year’s Winter Olympics in Beijing.

US athletes will still be able to compete. But the White House said it’s not sending diplomatic or official reps to the Beijing Olympics and Paralympic Games in February and March, citing “ongoing genocide and crimes against humanity” in the country’s Xinjiang region. Traditionally, the US sends delegations – like the VP or first lady – to Olympic events in host countries. (First lady Jill Biden led the US delegation at the 2020 Tokyo Olympics.) This time, American officials will be cheering their athletes from afar. It’s the first US boycott of the games since 1980, when the US kept all of its athletes out of the Moscow Olympics after the Soviet Union invaded Afghanistan.

Many supported the move. Lawmakers from across the aisle had pressured the Biden admin against attending the Olympics. And human rights orgs hoped the admin wouldn't turn a blind eye. But some said the move falls short of what's needed. Meanwhile, other countries (like Australia, Canada, and the UK) are considering their own boycott. But Beijing said "no one would care" if the US didn't come. (Ouch.) And that a potential boycott amounted to grandstanding.

China has long seen the Olympics as an opportunity to throw around its weight on the global stage (see: its 2008 Opening Ceremony). But the problem with a big stage is that when the VIP seats are empty...people notice.

The Justice Dept. Yesterday, it filed a lawsuit against Texas alleging over its new map. In October, the TX Republican-controlled legislature approved new congressional districts following the 2020 census results. Reminder: The census reflects the population's changes over the last 10 years. And gives states the opportunity to redraw their electoral maps based on it (aka redistricting). And in some instances, lawmakers can redraw maps to benefit a specific party or group (aka partisan gerrymandering). In Texas’s case, minority voters made up about 95% of the state’s 4 million new Texans. So the Lone Star State gets two new House seats. But after a review, the DOJ said 'hold on a minute' – alleging the state discriminated against Black and Latino voters by denying them "equal opportunity to elect representatives." Which violates the Voting Rights Act. Texas AG Ken Paxton (R) called the lawsuit “absurd” and said the changes will be “proven lawful.”

PS: Here's how redistricting works – and how it could impact your vote in 2022.

What’s changing up its defense strategy…

NYC. Yesterday, Mayor Bill de Blasio (D) announced a COVID-19 vax mandate for all NYC private-sector employees – calling the requirement the “first-in-the-nation.” About 90% of NYC's workforce is vaccinated. City workers and people at indoor restaurants, theaters, and gyms are already under vax mandates. But de Blasio’s saying ‘more has to be done.’ Especially amid warnings of a winter surge and the worrisome Omicron variant. Now, employees at roughly 184,000 businesses will have to have at least one dose by Dec 27. Remote workers and those with religious or medical reasons can be exempted. The penalty for not complying is unclear.

PS: Check out how your vax status can pay off...or cost you.

Medina Spirit. Yesterday, the horse that won this year’s Kentucky Derby died of an apparent heart attack. It happened after a workout at California’s Santa Anita racetrack – and months after the horse tested positive for steroids in a post-race drug test. The death follows a 2019 investigation into Santa Anita, where dozens of horses died during the racing season. And comes amid years of pressure on the sport from animal welfare activists.

While Drake is taking his hat out of the ring...

What’s reminding us what the world needs…