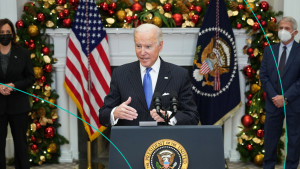 The US gov’s ramping up efforts to combat Omicron.

On Dec 1, the CDC confirmed the first case of the new COVID-19 variant in the States. Since then, Omicron has been spreading…fast. It now makes up nearly three-fourths of new coronavirus cases in the US. And earlier this week, officials in Harris County, Texas, reported the first known Omicron death. The departing NIH director says there could soon be 1 million new COVID-19 cases per day — threatening hospital resources and testing supplies. It’s all got the Biden admin adding to the country’s COVID-19 toolbox.

Yesterday, President Biden said ‘Happy Holidays, the gov’s providing more testing sites.’ First up: NYC, which will get help before Christmas. (Oh and it's giving away $100 to those who get boosted.) FEMA will also set up vax clinics to help administer boosters. Then starting next month, ‘you get a free COVID test and you get a free COVID test.’ The gov will deliver 500 million at-home tests to Americans who order them. TBD on the details. The gov’s also ready to deploy 1,000 US troops to help hospitals. And hundreds of millions of N-95 masks, gloves, and other equipment are on standby for states in need.

Some health experts say the admin’s efforts are not aggressive enough. And that the US still lags behind other countries like the UK and Germany, which have apparently provided billions of tests. Others reportedly say the admin could ban air travel for people who aren’t fully vaccinated. But Biden said, “this is not March of 2020.” And that vaccines are the “most powerful tools we have.” The FDA could also grant authorization to Pfizer’s and Merck’s antiviral COVID-19 pills this week — further expanding treatment.

Omicron has pushed the US into a new phase of the pandemic. But while it’s giving 2020 flashbacks, Americans have more options to protect themselves and others. Here’s how you can do your part to stay safe.

The US.* Yesterday, the Census Bureau released estimates that show the US population only grew by 0.1% between July 1, 2020, and July 1, 2021. For all the math lovers out there: that’s 392,665 people. To put it into perspective: it's the lowest rate since the nation’s founding. Period. And the first time since 1937 that the population grew by fewer than 1 million. COVID-19’s partly to blame, increasing mortality and less international migration. Deaths from an aging population and drop in fertility rates also played a role. A Census Bureau official said “population growth has been slowing for years.” Concerning, because it could affect our labor force down the road.

PS: Another reason a number of women aren't having babies: they don't want to be parents. Here’s one author's take on her choice to be childfree.

Who has struck a deal…

Kellogg's workers.* Yesterday, the union reprsenting about 1,400 striking employees said they ratified a new five-year contract with Kellogg Co. In October, workers at four US cereal plants walked off the job after their contracts expired. And negotiations over pay and benefits stalled. The news also made a splash on TikTok, backing the workers on strike. Now, Kellogg's saying 'we have a deal.' And that the agreement offers "immediate" wage bumps and "enhanced benefits for all." The presidents of the workers' union credited striking members who "stood their ground and sacrificed so much" for months. Kellogg's says employees will return to work next week.

PS: Here's your explainer on labor unions and how the pandemic has impacted them.

The FAA. Literally. Yesterday, the Federal Aviation Administration (FAA) announced it was buddying up with the Transportation Security Administration (TSA). The two will share info about misbehaving passengers (like the more than 5,600 reports this year alone) and take away the TSA PreCheck of those on the naughty list. Basically telling them: 'you're grounded.'

Who’s got a message for all his fans…

What’s having a bones day…