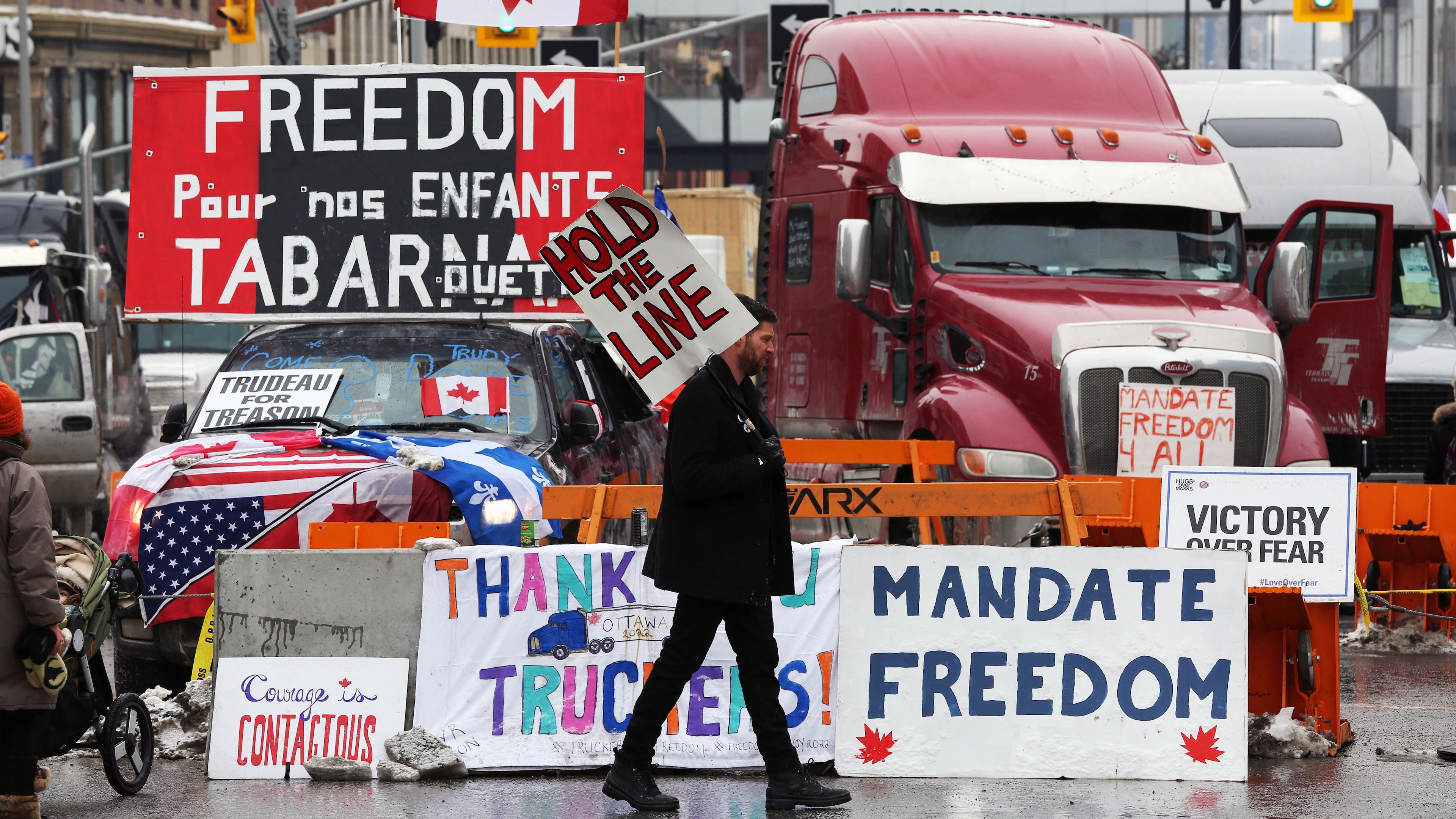 For weeks, thousands of people calling themselves the “Freedom Convoy” have been demanding an end to COVID-19 mandates (think: for masks and vaccines). They’ve paralyzed downtown Ottawa, surrounding Parliament Hill where gov officials meet. And blocked a major US-Canada border crossing for nearly a week, costing millions of dollars in trade each day. Now, Trudeau has invoked emergency powers to end the protests.

Yesterday, the PM became the first Canadian leader to use the Emergencies Act. The never-before-used law gives the federal gov powers for 30 days to basically do whatever is necessary to restore public order. The gov could do things like issue travel bans, remove people or property from certain areas, and impose fines for rule breakers. But it’s not a done deal yet. Parliament has to approve Trudeau’s move within a week — something that’s expected to happen.

Trudeau said the act is a “last resort” to address protests that have disrupted daily life and the economy. It comes as critics have pointed the finger at police for not doing enough to stop the protests from escalating. But several other gov leaders — including from Quebec — have said invoking emergency powers could make the situation worse. And Canada’s not the only one dealing with protests.

Copycat protests against vax mandates have popped up around the world. Over the weekend, France’s so-called “Freedom Convoy” took over central Paris, prompting police to use tear gas. In New Zealand, officials took a different approach, playing "Baby Shark” and James Blunt’s “You’re Beautiful” to disperse protesters. Demonstrations have also popped up in Australia, Belgium, Israel, Alaska, and New York.

The protests in Canada are not an isolated event. They've spiraled into a movement that spans continents and political ideologies, reportedly ranging from anti-vaxxers to neo-Nazis and white supremacists. Now, after several weeks, Canada is saying 'enough' — or at least it's trying to.

What’s got people holding their breath…

Russia. Today, the Defense Ministry said it was pulling back 10,000 troops from the border with Ukraine. But the pullback hasn’t yet been confirmed — and it’s out of an estimated 130,000 troops at the border. The news comes as US officials reportedly warn Russia could attack Ukraine as soon as tomorrow. And as the US has been relocating its embassy from Kyiv. President Biden has said US troops won’t fight in Ukraine. And that any Americans who haven't yet left would be on their own. The tensions are putting a spotlight on the Biden admin’s foreign policy approach just months after the chaotic withdrawal from Afghanistan.

This new COVID-19 treatment. On Friday, the FDA authorized a new monoclonal antibody drug geared to fight Omicron and BA.2 — a subvariant. Eli Lilly’s bebtelovimab (say that five times fast) is available for adults and kids 12+ with mild-to-moderate COVID-19. Hundreds of thousands of doses are expected this month and next. The FDA’s approval comes as Dr. Anthony Fauci says the US is exiting its “​​full-blown pandemic phase of COVID-19.” And as new cases decline across the country.

Skimm More: We spoke to a doctor with a preexisting condition about how the pandemic has affected her.

Kamila Valieva. The 15-year-old Russian skater is competing in today's women's short program, despite failing a drug test back in December. Russia is no stranger to doping scandals. But this week, the Court of Arbitration for Sport ruled that Valieva wouldn't be suspended just yet — in part because she's a minor subject to different rules. It decided to let her continue competing ahead of a full investigation. If Valieva wins another medal, the ceremony will be on hold while it’s under review.

While we may get a triple threat of Oscars hosts...

The White House Correspondents' Dinner just has the one.

What’s not a typo…