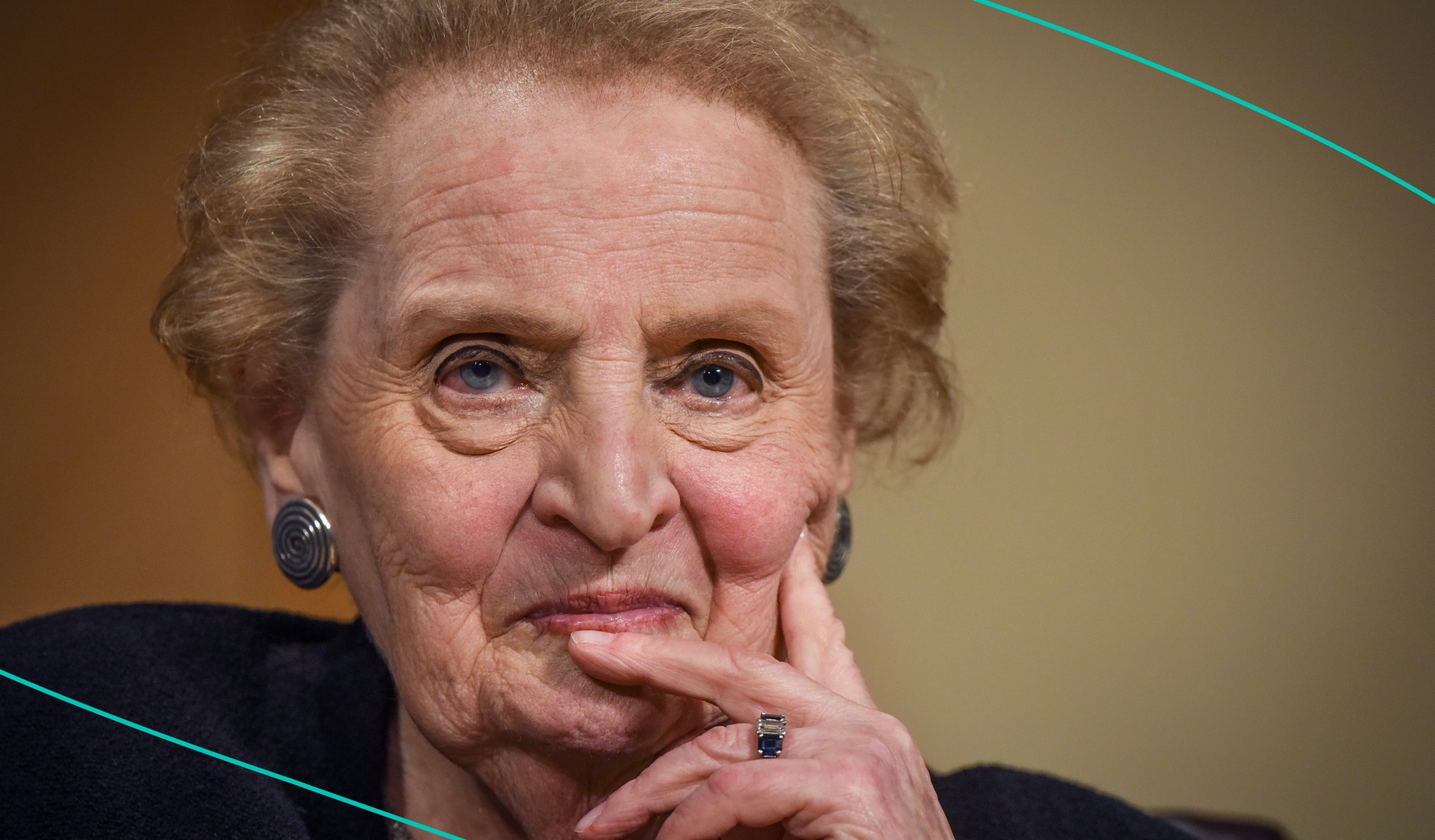 The US is mourning its first female secretary of state.

Yesterday, Madeleine Albright’s family said she had died of cancer at age 84. Born in Czechoslovakia to Jewish parents, Albright came to the US in the 1940s, after her family fled Nazism and communism in Europe. In the 1970s, she served on the National Security Council under the Carter admin. Then under President Bill Clinton, she was appointed US ambassador to the UN. And in 1997, she became the US's first female secretary of state — with support from a unanimous Senate.

Right. In her role as sec of state, Albright encouraged NATO intervention to end the ethnic cleansing of Albanians in Kosovo. And actively promoted the expansion of NATO. Albright toed a hard line with Cuba, famously saying the 1996 shooting down of two unarmed civilian planes was “cowardice.” And in 2012, she was awarded the Medal of Freedom — the US's highest civilian honor.

What about the controversies?

There were many. In 1996, Albright defended the impact of UN-imposed sanctions on Iraqi children, calling it a hard choice but "worth it." She was also criticized for ignoring warnings about truck bombings that killed hundreds of people at US embassies in Kenya and Tanzania. The Clinton admin also failed to intervene to prevent ethnic violence in Bosnia and Rwanda, which collectively left hundreds of thousands of people dead. Albright described the international community's inaction in Rwanda as her “deepest regret.”

Former and current presidents are offering their condolences. President Biden called her a "champion of democracy and human rights." And is requesting that US flags be flown at half-staff. Former President George W Bush mourned Albright's "love of country and public service." And former President Bill Clinton called her “one of the finest secretaries of state” and “an extraordinary human being.”

Albright was a trailblazer for women in the field of public service. And for some, her approach to NATO in a post-Soviet world seems eerily relevant today.

Where girls are being shut out…

Afghanistan. Yesterday, the Taliban announced it’s postponing the reopening of schools for girls grades 6 and up. After the US withdrawal last year, the government promised it would let adolescent girls pursue an education — something it hadn't allowed when the group was last in power in the '90s. But when schools were supposed to reopen this week, the Taliban told girls to stay home. Now, they’re backtracking on that promise. That is, until officials can draw up a plan for schools that aligns with their interpretation of Islamic law. 1 million girls in the country could be affected. And if they aren’t back in class soon, it could impact aid the country gets, since Western countries have made clear girls’ access to education is a must.

Who's not mincing words...

The US. Yesterday, the Biden admin formally accused Russia of carrying out war crimes in Ukraine. It’s been a month since Russia invaded Ukraine. Officials say hundreds of civilians have been killed. In the southern port city Mariupol, there are reports that upwards of 80% of the city has been destroyed. Now, Sec of State Antony Blinken said the US will work to hold offenders accountable for deliberately targeting civilians. The US plans to share the info with its allies and possibly help assist a prosecution at the International Criminal Court. But the US hasn't made clear whether it holds Russian President Vladimir Putin specifically responsible.

Moderna’s COVID-19 vaccine. Yesterday, the company shared new data on its vaccine for kids between the ages of 6 months to 5 years. It found that the vaccine gives children a similar immune response as it does adults. But the shot was only about 40% effective against symptomatic illness for kids under 3. Moderna is expected to ask the FDA for authorization in the coming weeks.

PS: Speaking of COVID-19 and kids, should parents still have families mask up? We asked pediatricians.

When you're looking around on LinkedIn...

How do they do on paid family leave? Meet, our database.