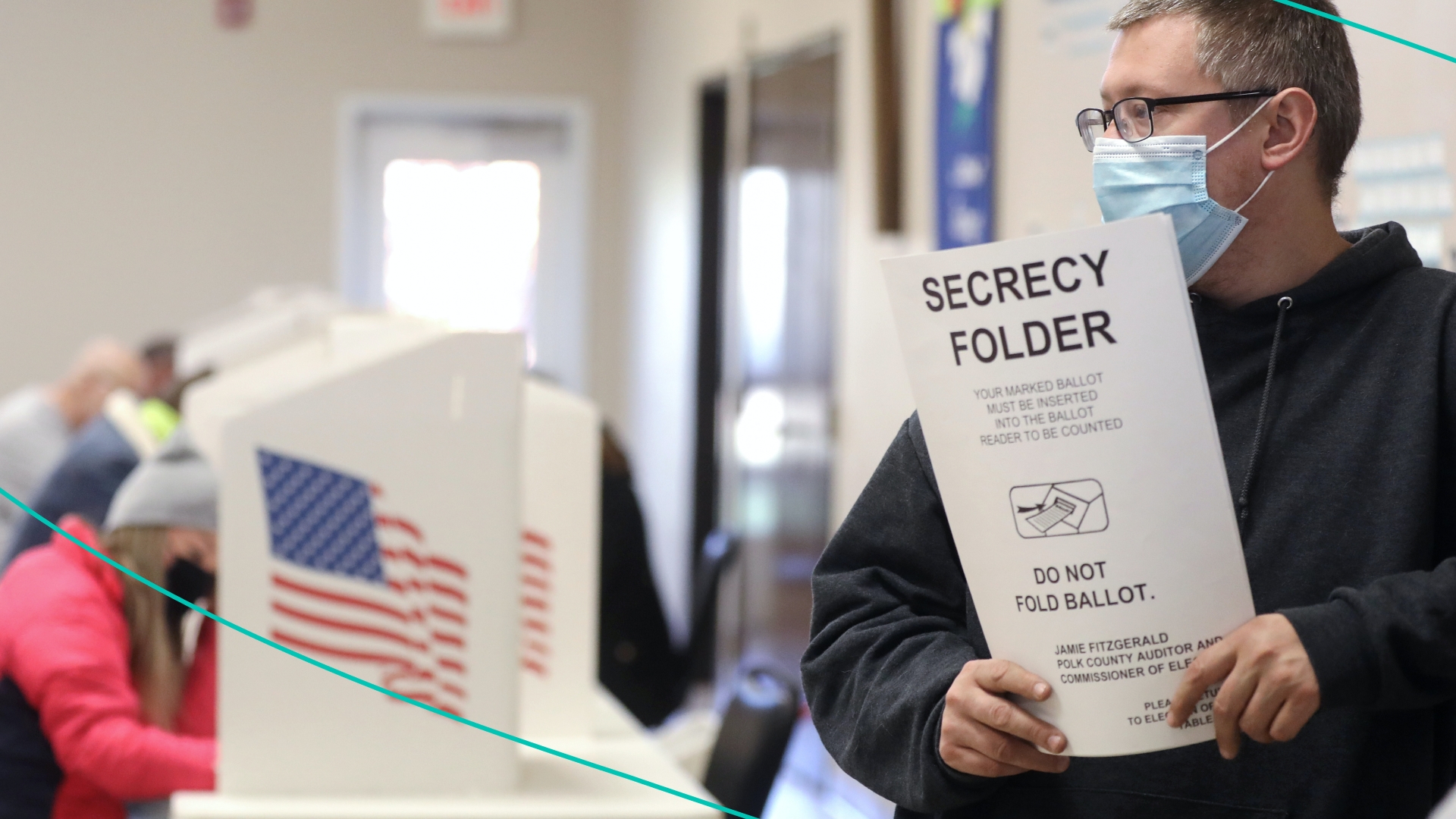 Primary elections are taking over.

Voters in seven states are headed to the polls. Think: California, Iowa, Mississippi, Montana, New Jersey, New Mexico, and South Dakota. Whatever voters decide today will set the stage for some heated contests in November, as Republicans look to take back control of Congress. Keep in mind the Senate is currently split 50-50. And every House seat is in play. Here are the races being closely watched:

California: There are plenty of congressional races going down in the Golden State today. California sends the largest delegation to Congress (Dems have 42 House seats, while the GOP has 10). And the Democrats' ability to hold onto a House majority could rest on its shoulders. Especially with one vacant seat up in the air. And with Rep. David Valadao (R) fighting to keep his seat, after getting flak for being one of 10 House Republicans to vote to impeach former President Donald Trump. Also on the ballot: Gov. Gavin Newsom (D), who survived a recall election last year — but is likely to keep his job this time, too. Important to note: California has an unusual primary system. Most states choose one candidate per party. But CA sends voters’ top two picks to the Nov general election, regardless of party.

Iowa: Famous for being the first state in the presidential election caucuses, Iowa’s a former swing state that turned solidly Republican in recent years. But it's on the Democrats’ wishlist for 2022. Four House seats are in play. And former Rep. Abby Finkenauer is facing off against retired Navy Vice Adm. Michael Franken in the Democratic Senate primary. The winner will likely go on to challenge longtime Sen. Chuck Grassley (R), who’s been in office since 1980. At 88, Grassley is the oldest member of Congress except CA Sen. Diane Feinstein (D) — and if he holds onto his seat, his next term would end when he’s 94.

How are these primaries different?

Americans have a lot to think about. Abortion rights are on the docket, with SCOTUS set to release its decision on Roe v. Wade in the coming weeks. Gun violence has been top of mind with over 200 mass shootings occurring since the start of the year. Plus, dozens of states have intro'd more than 300 anti-LGBTQ+ bills, including bans on everything from allowing trans students to compete in sports to gender-affirming care. And let's not forget about record inflation, supply chain issues and shortages, and gas prices averaging more than $5 a gallon in many states. Many are looking to their elected officials to do more…and if not, voters could get ready to give them the boot.

Every election is important — but there’s a lot at stake in this year’s midterms. Many feel the government has been slow to address critically important issues, like gun violence and reproductive rights. With both houses of Congress in play, voters will have a say in the country's future.

Who almost got a pink slip…

PM Boris Johnson. Yesterday, the British PM survived a no-confidence vote from his own Conservative Party. Earlier this year, an investigation found that Johnson’s office broke COVID-19 lockdown rules at the height of the pandemic. Including hosting a BYOB backyard party and birthday party for Johnson. Police slapped Johnson with fines. But that wasn’t enough for some lawmakers. At least 54 Conservative MPs sent letters of no confidence in a bid to oust Johnson, and 148 from his party ultimately voted to remove him. It fell short of the simple majority of 180 votes they needed. But TBD if Johnson will be able to shake off “partygate” by the time elections roll around in 2025.

What could be on the agenda…

Executions. Yesterday, a federal judge gave Oklahoma the greenlight on its three-drug lethal injection method. Earlier this year, 28 death row inmates argued the first of the three drugs used doesn’t numb the feeling of pain and suffering — violating the Eighth Amendment. But the judge said that’s not the case. Now, the state could set execution dates for more than two dozen death row inmates. One of the attorneys for the inmates said they’re still looking at their options and could appeal.

The US. Since December 2020, more than 82 million COVID-19 vaccines have reportedly been thrown out. Because of the nature of the vaccine, all doses have to be used within hours of being opened or discarded. But in some cases, the shots expired while sitting in shelves or went bad because of power outages or broken freezers. CVS and Walmart were responsible for over a quarter of the thrown-out doses. Now, experts say demand for vaccines is dropping. But as of Memorial Day weekend, COVID-19 cases were about six times higher than they were a year ago. However, the number of COVID-related deaths are down.

While some of us up our snail mail game…