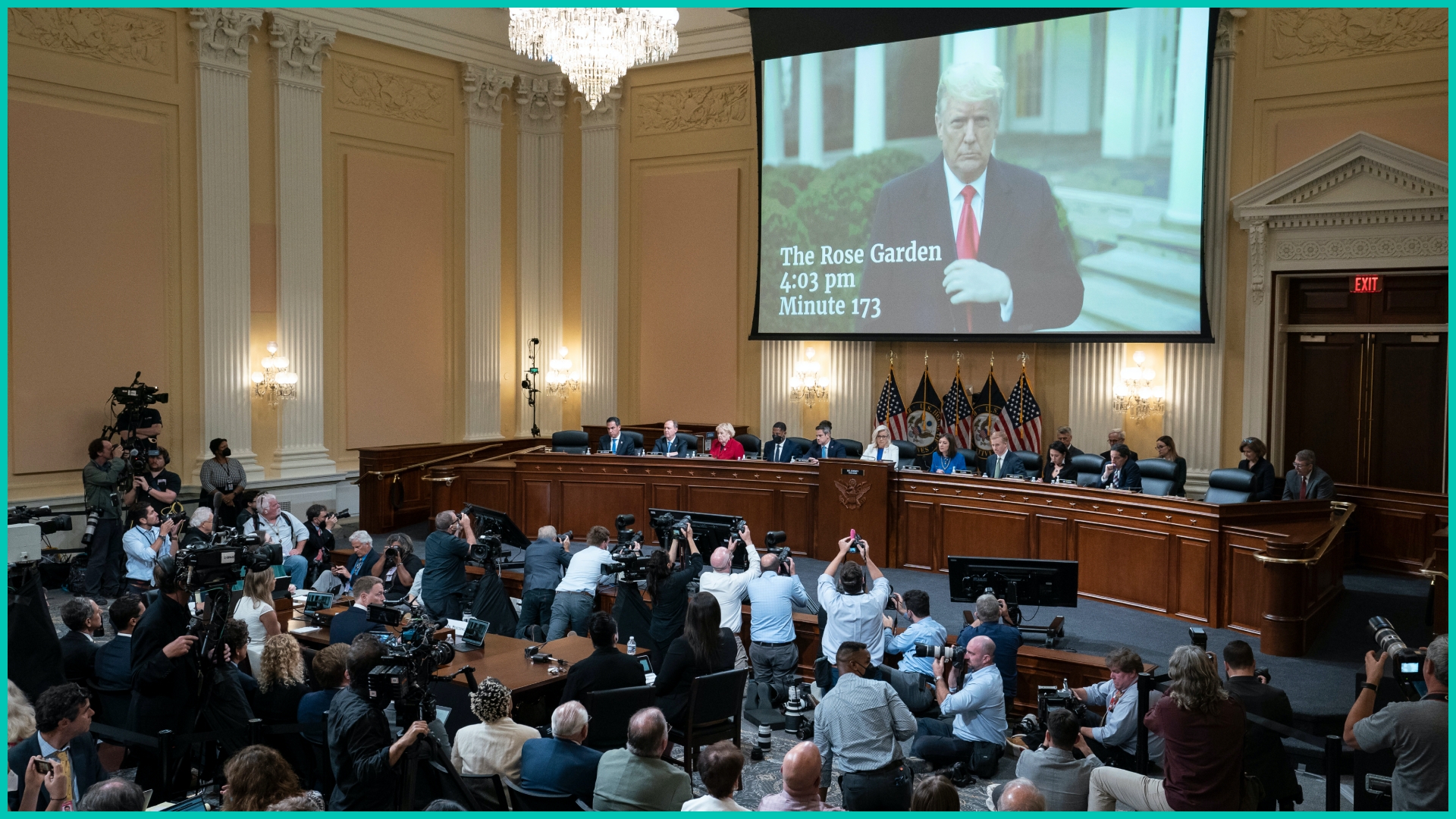 The Jan 6 House committee zeroed in on 187 minutes last night.

And that timeframe refers to…?

The more than three hours on Jan 6, 2021, when then-President Trump was not visible to the public — and while rioters stormed the Capitol. Here’s what things allegedly looked like behind the scenes:

1:10 pm: Trump ends his speech at the Ellipse saying, “we're going to the Capitol.” The committee said that after his speech, Trump engaged in a dispute with security officials over his desire to join supporters at the Capitol. Within 15 minutes of getting off the stage, Trump was allegedly aware that the Capitol was under attack.

1:25-4:03 pm: President Trump ends up staying in his private dining room by the Oval Office, with the TV tuned to Fox News “all afternoon.” During this time, Trump also called senators to ask them to delay or object to the certification process. According to testimony, Trump’s daughter Ivanka, White House chief of staff Mark Meadows, and Republican leader Rep. Kevin McCarthy (R-CA) pleaded for Trump to help call off the mob. An anonymous witness also said that members of the vice president’s security detail made calls to their families to say goodbye.

1:49 pm: The DC police declared the attack at the Capitol a riot. At this exact moment, Trump tweeted out a link to his speech at the Ellipse.

2:24 pm: Trump tweeted that “Mike Pence didn’t have the courage to do what needed to be done.” Trump’s deputy national security adviser* saw the tweet and said he decided to resign. At 2:38, Trump tweeted “stay peaceful” and that law enforcement is “on the side of our country.” At 3:13, he said, “remain peaceful.” By this point, Trump had allegedly been aware of violence at the Capitol for about two hours. Don Jr texted Meadows, “he has to condemn this sh*t ASAP.”

4:17 pm: Trump tweeted a video from the Rose Garden, the first public appearance since the attack began. He urged those still there to “go home.” And added, “we love you, you’re very special.”

The Jan 6 committee sought to make the case that Trump’s actions — and inaction — amounted to a “dereliction” of his duty. But Republicans continue to dismiss the hearings as "hearsay." Next up, the committee will reconvene for more hearings in September.

PS: If you haven’t been tuning into the Jan. 6 hearings, catch up on everything you missed here.

Who’s coming up with a Plan A…

Lawmakers. Yesterday, the House voted 228-195 to pass the Right to Contraception Act — legislation that protects access to birth control. Since SCOTUS’s reversal of Roe v. Wade, Democrats are scrambling to federally protect rights after Justice Clarence Thomas called on the court to “reconsider” the rulings that protect the right to same-sex marriages and contraception. Now, House Dems are patting themselves on the backs after passing legislation this week to federally protect both of those rights. But next up, the bill goes to the Senate, where it’s unlikely they’ll get 60 votes required to break a likely filibuster.

Amazon. Yesterday, the company announced a nearly $3.9 billion deal to snap up One Medical. Amazon says health care is “high on the list of experiences that need reinvention” and launched Amazon Pharmacy in 2020. But now, thanks to the all-cash transaction, it’s making even bigger moves. The primary care provider — which promises customers “24/7 access to virtual care” — says together it’ll have the opportunity to make health care “more accessible, affordable, and even enjoyable.” The deal means Amazon would get access to over 700,000 patients’ medical records. Amazon says it looks forward to improving the quality of the experience. But the agreement has already drawn criticism from regulators who worry about many companies' growing access to sensitive data.

Where there’s some accountability…

Minneapolis. Yesterday, a federal judge sentenced former police officer Thomas Lane to two and a half years in prison for violating George Floyd's civil rights. In February, a jury found Lane guilty of violating Floyd's rights by not providing medical care. Floyd’s family called the sentencing “insulting” because it fell short of the more than 5 years prosecutors asked for. But the judge said Lane had a “minimal role” in his death. He is the second officer, after Derek Chauvin, to be sentenced for Floyd's murder. Former officers Tou Thao and J Alexander Kueng have also been found guilty of violating Floyd's civil rights. Their sentencing has yet to be scheduled.

Why Americans got a reminder that COVID-19 is far from over...

President Biden. Yesterday, he tested positive for the virus and is experiencing “very mild symptoms.” Biden — who is 79 years old — is fully vaccinated and twice boosted. The president is taking Paxlovid and self-isolating. And will continue WFWH (working from the White House).

What’s got us saying ‘yup’…

*This copy was updated to reflect an error in original copy.