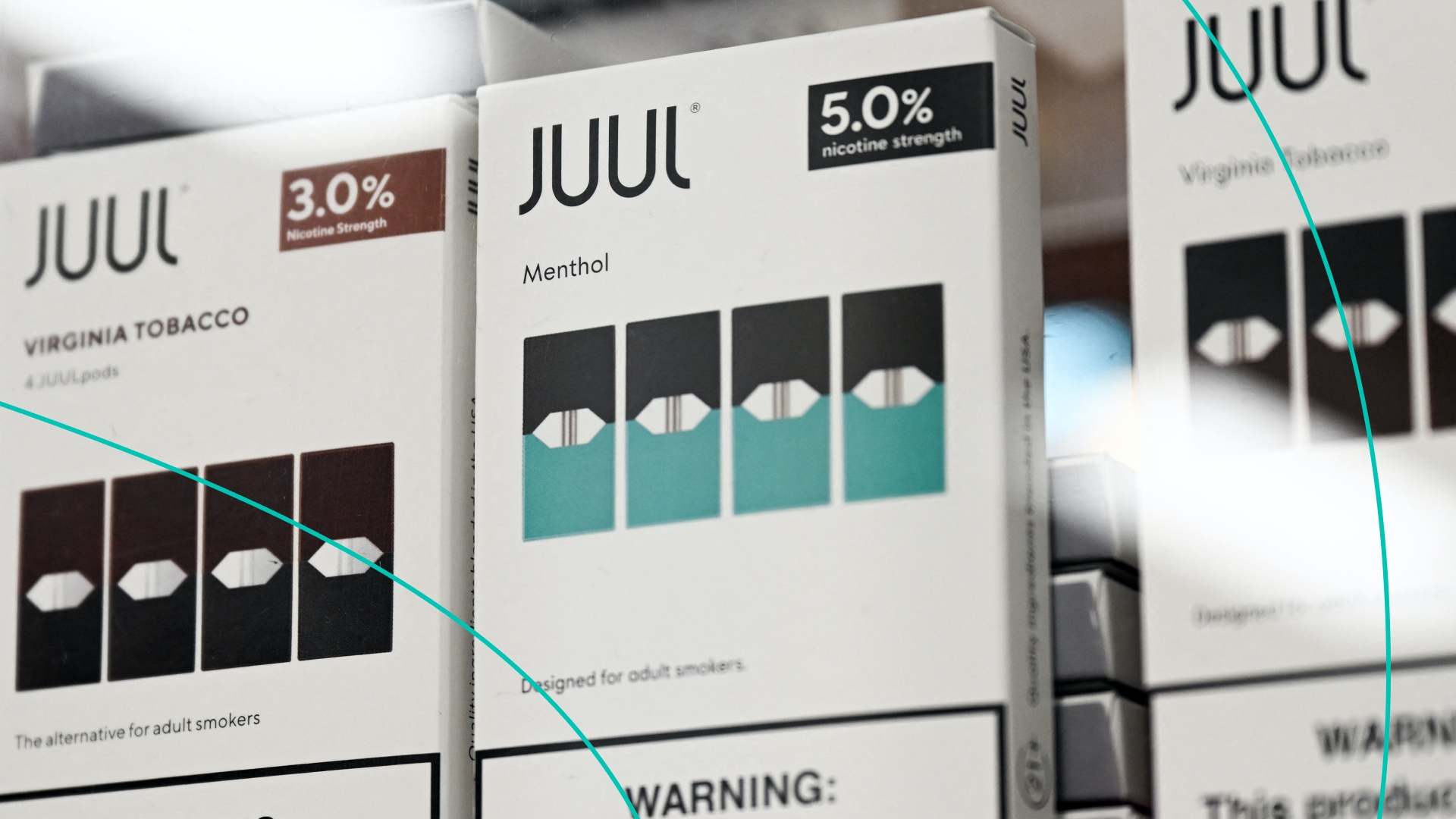 Juul’s sending a check to more than 30 states.

The company’s marketing practices have been under the microscope for years. Juul’s accused of specifically targeting teens by using social media campaigns, hiring young-looking models, and giving out free samples. In 2019, a Juul rep even told students the company’s e-cigs were “totally safe.” Now, after a two-year investigation, Juul is settling with 34 states and territories to resolve what it calls “issues from the past.” And no more models under the age of 35.

They definitely are, but maybe not at the same rate as they were. That could be partly due to the US raising the minimum age to buy tobacco products to 21 and banning the sale of fruity e-cigs. But a CDC and FDA study last year found that more than 2 million teens vape — with a quarter of high school students smoking daily. Not the best after-school activity, considering 99% of e-cigs contain ever-so-addictive nicotine, which can affect how the teen brain develops. E-cigs have also led to 3,000 cases of lung injuries as of 2020.

The FDA's been trying to ban Juul products from the US market earlier this year. A federal appeals court said the FDA can’t do that. So the products remain on the shelves while the appeal is being reviewed. But Juul expects to receive market authorization once the federal agency examines the company’s science and evidence — “without political interference.” Juul says it’s already ditched its old marketing strategy and is focusing on “combating underage use.”

Vaping was seen as a ‘healthier’ alternative to smoking regular cigarettes containing cancer-causing chemicals. But e-cigs aren't without risk. Now, Juul — which at one point held a 75% majority market share — is being held accountable for its role.

Pakistan. There's major concern as officials struggle to keep the country’s largest freshwater lake — Lake Manchar — from overflowing in the southern Sindh province. Historic floods in Pakistan caused by a heavier than normal monsoon season have killed at least 1,300 people. The floods have affected at least 30 million people, including by destroying homes and cutting off entire villages from help. Now, authorities are struggling to keep Lake Manchar from overflowing, potentially displacing thousands.

A UN watchdog. Yesterday, the Vienna-based energy agency called for a “security protection zone” around Ukraine’s Zaporizhzhia nuclear power plant. The six-reactor facility — Europe's largest — has endured near-constant shelling by Russians and Ukrainians since it was captured by Russian forces earlier this year. Last week, UN inspectors traveled to Zaporizhzhia to assess the damage. Now, they’re saying the shelling is like “playing with fire” — only adding the growing fears of a Chernobyl-like nuclear disaster. The report also says Ukrainians operating the plant are under “constant high stress and pressure” which could lead to human error. All of this has the UN agency ringing the alarm for the "immediate establishment" of the protection zone. The warning comes a day after shelling caused the last operating reactor to disconnect from Ukraine's power grid. Both Russia and Ukraine have apparently said they need to examine the details of the agency's plan.

What pairs with fall, maple lattes, and restarting all of “Gilmore Girls”...

Boosting up. Yesterday, White House officials said an annual COVID-19 vaxx could be the new norm. The White House’s COVID-19 czar says now that we have our first updated booster out, a single, updated annual COVID shot should provide a high degree of protection “against serious illness.” Kind of like the flu shot. Officials have warned that a new variant could upend the plan (surprise, surprise). The updated boosters are available to those 12 and up and previously vaccinated.

Who’s reminding us that 'health is wealth'…

While Kim K's getting cheeky with it...

Her sister's also teasing some goods.