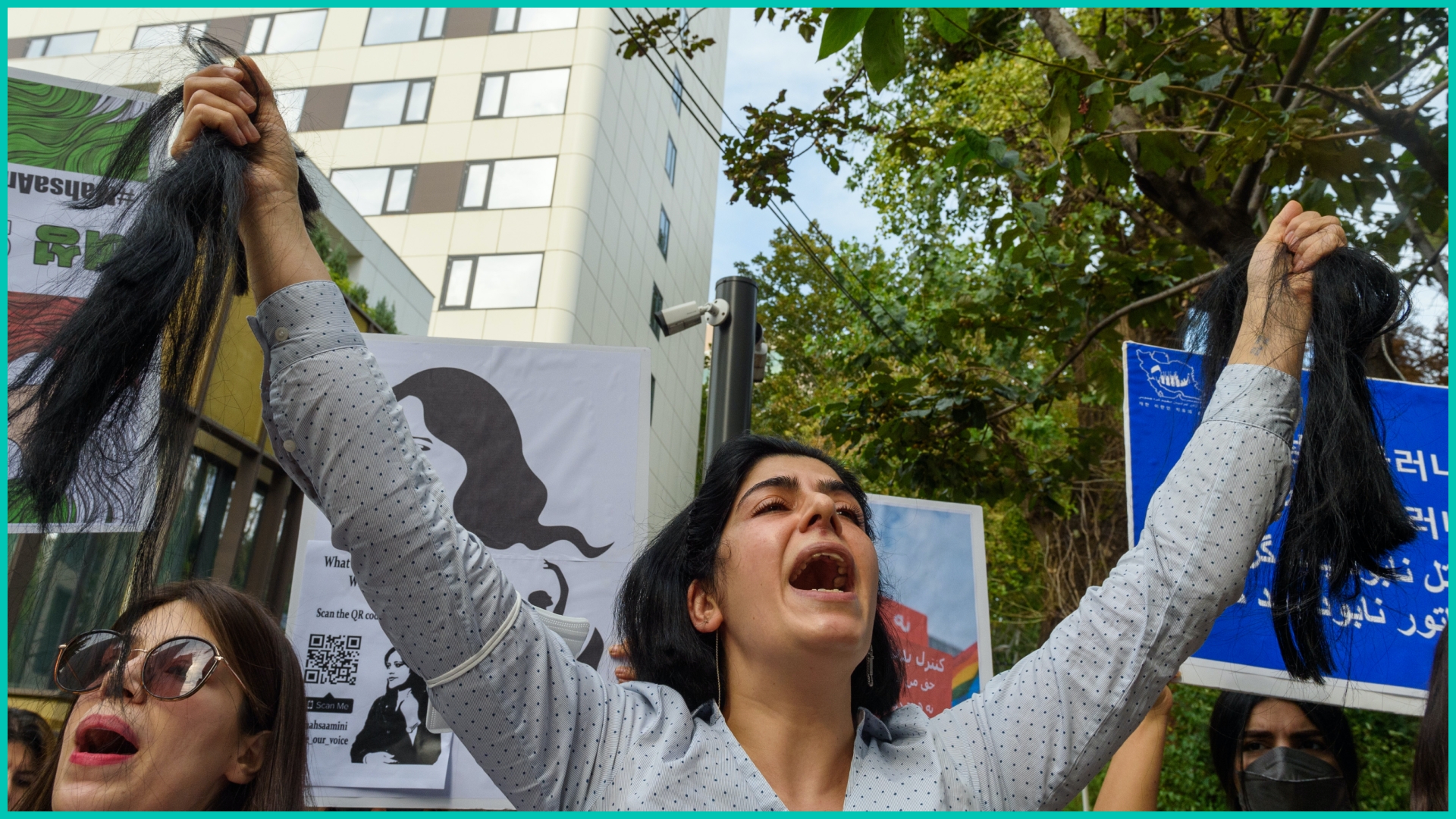 Today marks two weeks since the death of Mahsa Amini.

Since the death of the 22-year-old on September 16, protests have roiled the country and disrupted Iranian diplomacy abroad. Thousands have turned out to protest the state’s rules on the hijab and the country's morality police. But Iranian President Ebrahim Raisi says the gov won’t tolerate “chaos and riots.” Now, authorities are reporting at least 14 dead, state TV is reporting at least 41, and one human rights group says the death toll is reportedly closer to 83.

Internet access is still being heavily restricted by authorities, and WhatsApp and Instagram are still blocked. But efforts to control the flow of information and police crackdowns haven't stopped protesters from demonstrating individual acts of resistance. Think: going out in public without hijabs or burning them, cutting hair, and shouting “death to the dictator” from rooftops. And earlier this week, Iran’s soccer team covered up their national symbols before a match to show solidarity with the demonstrators.

Unlike past Iranian protests over things like the economy, Mahsa Amini’s death has sparked a women’s movement against the gov’s strict treatment of them. Many want women to have more control over their bodies — and own the decision of whether or how they choose to wear a hijab.

What people are watching closely...

Hurricane Ian. Today, the now-Category 1 storm is expected to land in South Carolina. The news comes as rescue operations have begun in Florida with at least 11 confirmed dead and more deaths expected in the coming days and weeks. President Biden said the storm could turn out to be “the deadliest” in the state’s history. Now, it’s barreling toward South Carolina packing 85 mph winds.

Where the pressure is ramping up…

Russia. Today, a Russian missile attack killed more than 20 civilians in Zaporizhzhia. The attack came hours before Russia is set to announce it is annexing the four occupied regions of Donetsk, Luhansk, Zaporizhzhia, and Kherson. The annexation comes days after Russia held what Ukraine and Western countries — including the US — condemned as “sham” referendums in the occupied territories. Now, Western allies are promising more sanctions against Russia and additional Ukrainian support by sending more arms their way.

Which country has abortion updates…

India. Yesterday, the country’s top court ruled that marital rape counts as rape — and guarantees the spouse the right to an abortion. As a result, all women — regardless of their marital status — can get abortions up to 24 weeks from conception. But while the ruling now recognizes that rape can happen within a relationship, marital rape still isn’t a crime in India. The country’s seen high rates of sexual assault against women and girls. Recent cases (see: this and this) have sparked protests across India, calling for harsher punishments.

Meta. Yesterday, Facebook’s parent company announced a hiring freeze — the first major budget cut since the company was founded in 2004. The news comes after Meta reported a revenue drop last quarter. CEO Mark Zuckerberg has said most teams will see budget cuts as the company prepares to restructure. The news comes as Zuckerberg prioritizes the company’s TikTok competitor — and puts all his chips in the Metaverse, a virtual reality experience he says will take years of investment before it pays off. Meta’s layoffs come after Twitter, Alphabet, and Snap have also done some belt-tightening.

...Oh and speaking of things Zuckerberg’s Meta has been up to: AI that can show a teddy bear painting a portrait.

What there’s a new treatment for…

ALS. Yesterday, the FDA approved a drug to treat Lou Gehrig's disease. In a study of nearly 150 patients, Relyvrio — developed by Amylyx Pharmaceuticals — showed signs of being able to slow the progress of the disease, with patients surviving almost a year longer than expected. Usually, the FDA relies on two bigger studies or one “persuasive” study before greenlighting a new drug. But this was only one study. And its persuasiveness was met with skepticism by the FDA, which said there's "uncertainty" about its effectiveness. But it ultimately decided it was "acceptable" based on the need for treatment. The announcement came amid pressure from patients and Congress for the agency to advance treatments and cures. Now, about 20,000 patients living with the disease will have a new option for treatment. The results from a larger study are expected in 2024.

NASA, to the asteroid that was 7 million miles away. Pics or it didn't happen.

While your favorite sisters are brewing up something good…

You can get in on the action.

While Trevor Noah is taking a bow…

He could also be feeling some Electricity with Dua Lipa.