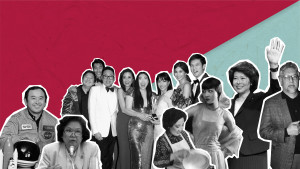 Why: Hiram Fong was elected in 1959, one of Hawaii’s first two senators and the US’s first-ever Asian-American senator. Fong grew up as the son of Chinese immigrants – his dad an indentured servant, his mom a maid. During his almost 20-year-long career in the Senate, he focused on immigration, civil rights, and national security. His amendment to the 1965 Voting Rights Act required poll watchers to protect minority voting rights. That year, he also worked to help pass a bill to get rid of quotas on Asian immigration to the US.

What: First woman of color and Asian-American woman elected to Congress (D-HI)

Why: Patsy Mink was a champion of women’s rights and education. She was also outspoken about the wrongs of Japanese-American internment during WWII. Mink is most known for sponsoring and co-authoring Title IX, the law that protects students and school faculty from gender-based discrimination. She also worked on legislation to establish student loans and special education. And she was crucial in helping to pass the Women’s Educational Equity Act, which set aside tens of millions of dollars in education money per year to do things like promote gender equality in schools and get rid of gender stereotypes from textbooks.

Why: Born in 1905 in California, Anna May Wong was the first Chinese-American movie star. She was limited in the roles she was cast – often stereotypes villainizing Asian women, treating them as seductresses or both. Her breakout role was the 1922 silent movie “The Toll of the Sea,” where she played a Chinese woman who had an affair with a white man. She was also celebrated for her role as a sex worker in “Shanghai Express.” And played Tiger Lily in a version of “Peter Pan.” But Wong was frustrated with the typecasting. At one point, she left the US for Europe, reportedly telling an interviewer that she was “so tired of the parts that I had to play.” She was also limited by racist laws that made it illegal for Asian actors in the US to kiss white actors on screen (let alone marry them in California, off-screen). In spite of all these limitations, Wong made her mark on US cinema as a charismatic actress, and one of the few who played the Asian roles that typically went to white actors.

What: First Hollywood movie with an all-Asian cast in 25 years

Why: “Crazy Rich Asians” isn’t just a love story with a lot (read: a lot) of wealth thrown around. It’s the first one Hollywood’s put out with an all-Asian cast in a quarter-century. It’s a big deal, because Hollywood still regularly casts roles written for Asian characters to white actors. And has a history of pigeonholing Asian actors into tropes. The last Hollywood movie with an Asian cast was “The Joy Luck Club” – a drama about four Chinese immigrant women and their American daughters...and it came out more than 25 years ago. It had a good run at the box office, making $32.9 million. But “Crazy Rich Asians” was operating on another level. It made $175 million. And was the top-grossing rom-com of the decade. Plus the sixth-highest, ever (sorry, “The Proposal”). Yes, you can thank it for bringing back the rom-com at a time that many thought it was dead.

What: First movie to ever be translated into Tahitian

Why: “Moana” is all about Disney’s first Polynesian princess-slash-daughter of the chief trying to save her Pacific island from ecological disaster. It’s a big deal, not only for its representation, its focus on the environment, and for the fact that the story doesn’t revolve around a love interest – a classic Disney trope. It was also the first movie ever translated into Tahitian – a language that’s seen to be on the decline. And was also translated into Hawaiian and Maori, the indigenous language of New Zealand. Although there have been critiques over how certain elements of the story were handled or commercialized, many have noted the value of making Disney stories more representative and accessible to more people.

What: Filipino private who was the first Pacific Islander to be awarded the Medal of Honor

Why: He received the award for bravery during the Philippine Insurrection while serving in the US Army. On September 24, 1911, Nisperos was badly wounded – his left arm was severely injured and he suffered several spear wounds – and couldn't stand. But he continued firing his rifle with one hand until the enemy backed off. He prevented further damage to the people with him.

What: First Indian-American to win the Pulitzer Prize in the poetry category

Why: Seshadri was born in India and moved to Ohio when he was five. His book “3 Sections” won the 2014 Pulitzer Prize and was described as a “compelling collection of poems that examine human consciousness, from birth to dementia, in a voice that is by turns witty and grave, compassionate and remorseless.”

What: First Asian-American, first Japanese-American, and first Hawaiian in space

Why: Sky's the limit for Onizuka. Literally. He was part of the US Air Force and eventually made his way to NASA. On January 24, 1985, he went to space as an astronaut on the space shuttle Discovery. And he knows his priorities – while orbiting over 200 miles above Earth’s surface, he made sure to bring Kona coffee.

What: A Chinese-American chef, restaurateur, author, television personality, and entrepreneur

Why: She’s credited with bringing northern-style Chinese cuisine to the US. She coined the name "Peking Raviolis" for potstickers. She invented and held the patent for the flat bottom wok with a handle. And she developed the first line of bottled Chinese stir fry sauces for the US market. Anddd now we're hungry. In 2014, Chen was one of five chefs honored by a limited edition set of stamps for revolutionizing the country’s understanding of food.

What: The first Asian-American woman to be appointed to any presidential cabinet in US history

Why: She spoke no English when she got to the US at age eight. Fast forward more than a decade and she became a US citizen who went on to get an MBA from Harvard Business School and an econ degree from Mount Holyoke College. Later, she became President George W Bush's labor secretary for two terms – the longest-serving since World War II. She’s now President Trump’s transportation secretary.

PS: Want to continue to learn more about Asian American and Pacific Islander Heritage Month? We got you covered.