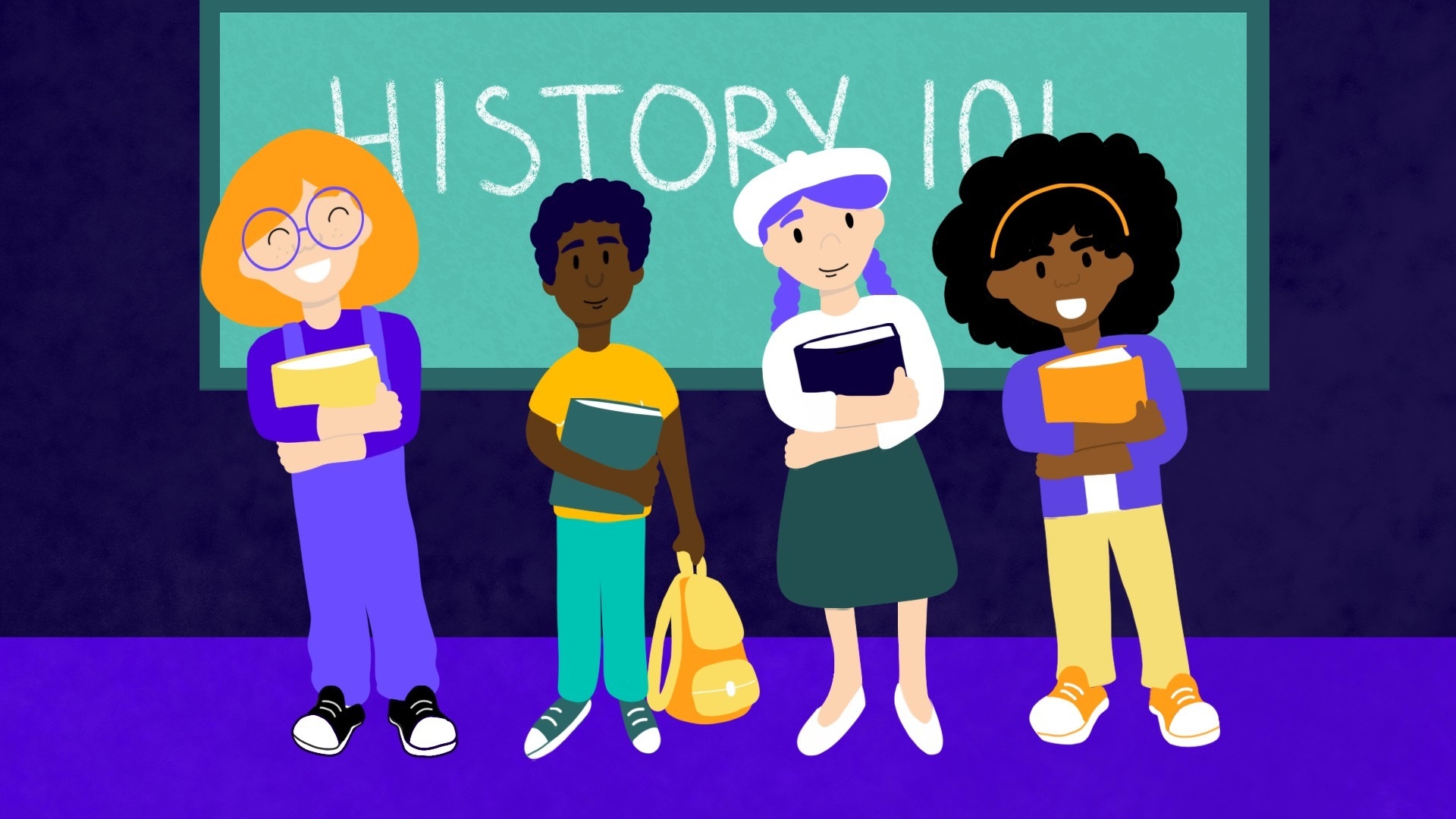 At present, the US has no federal requirements for teaching Black history. That means it’s often up to states or individual schools and teachers to include Black perspectives in their curriculum. And the issue with this approach is that it neglects a basic fact: Black history is American history. And a majority of Americans agree: an Economist/YouGov poll found that two-thirds of Americans want more Black history incorporated in US education.

Meanwhile, the current Black history curriculum available in K-12 classrooms is riddled with missing facts. These lessons usually begin with the history of slavery, instead of starting with the history of Africa. Meaning: students miss out on understanding the complex and advanced civilizations that existed on the continent prior to the American slave trade. It also erases the brutality of post-Civil War America and oversimplifies the Civil Rights movement into only a few standout moments and figures.

Without accurate and expansive Black History lessons in our classrooms, students fail to understand the systemic racism in our society from its indoctrination point. Basically, it’s a one-sided, and mostly white-washed, lesson.

Similar to the heroes fighting for Black equality in voting and laws, there have been people working for years to make our education system more inclusive and equitable. Here are just a few…

“When I studied history in school,” LaGarrett King, director of the Carter Center, told the Missourian. “It always felt like something was missing — particularly the stories of the people that looked like me.”

To fill this void, King, who is also an associate professor at University of Missouri, created the Carter Center for K-12 Black History Education. It’s a program at the University of Missouri that advocates for integrating Black history into the national curriculum and supports educators working to make it happen.

And King provides a solution for this through his center. Every year the Carter Center throws an annual Teaching Black History Conference. This year’s focus is on how to teach students about Tulsa’s Black Wall Street and the History of Race Massacres. The aim is to bring educators together and give them the tools they need (think: strategies and methods) to teach Black History in an engaging and transformative way.

King came up with guiding principles for restructuring curriculum including a focus on oppression and power, the African American diaspora, and Black agency, excellence, and joy.

“The curriculum will need to balance narratives of victimhood, oppression, perseverance, and resistance, but unlike current renditions of the curriculum,” King wrote in a paper. “It should contextualize issues that connect with the present.”

Last year, Rep. Marcia Fudge (D-OH) (who may soon join President Biden’s Cabinet as HUD secretary) intro’d the Black History Is American History Act. The act would require that national tests for grades K-12 include Black history. And would give teachers and students grants to support their effort to incorporate Black education. More than 120 lawmakers support the legislation.

Fudge explained her motivation for introducing the act in a Fortune op-ed by using the origin story of Juneteenth. In 1865, a Union General informed Texas slaves that they were “forever free.” The catch: this was two years after President Abraham Lincoln’s Emancipation Proclamation went into effect.

Flashing forward, many Americans were unaware of the significance of this day. Last year, as protesters marched for justice following the killing of George Floyd, Juneteenth officially entered into the mainstream’s consciousness. Now, many schools and companies are recognizing the holiday and adding it to their calendars.

At present, this bill has only crossed the introductory phase in the House. It still needs to be voted on and made into a law. The best way to get Congress to pick it up: call your senators and representatives and demand that this act gets a vote.

An academic, writer, and educator, Rachel Cargle first came to prominence with a viral image at the 2017 Women’s March. In it, she’s holding up her fist in one hand and a sign in the other: “If you don’t fight for all women, you fight for no women.”

Since then, Cargle has amassed nearly 2 million followers on Instagram, where she uses her platform to educate an audience of primarily white women to take ownership of their anti-racist education, on everything from Black history to culture.

But back in 2017, Cargle was still learning about race and feminism. She read books, listened to lectures, and learned about Black writers and academics she was unfamiliar with.

“It was a lot of me posting as I learned. I gave myself permission not to be an expert,” she told The Washington Post Magazine. Afterward she started giving lectures about the takeaways she gleaned from her research.

One of her popular lessons is geared toward educating white women. In “Unpacking White Feminism” Cargle challenges white women to understand their privilege, take into account their historical heroes' motives (like suffragettes who advocated for white women to get the right to vote, vs. all women), and examine their uncomfortability with talking about race – without babying or hand holding those thoughts. “Anti-racist work is not self-improvement for white people,” she added to WaPo Mag.

Later on, Cargle told The New York Times that she hopes her posts and lectures “speaks to the white community” and affects the way “white people show up in the world and the way they interact with Black people they exist with.”

And, for those that want to virtually access Cargle’s lessons, she created an online learning platform on the topic called The Great Unlearn. It examines intersectionality through time and centers on the work that is ever-present in Cargle’s discussions, lectures, and on her Instagram.

Killer Mike is a songwriter and rapper who started his career back in the ‘90s. He’s also a public speaker and social-political activist who has given lectures at MIT and NYU. Some of his talks have also gone viral (like his passionate speech following the death of George Floyd).

Mike, whose father was a police officer, talks frequently about police brutality and social justice. But lectures aren’t the only way that he gets his message out to the public. He uses his art as a medium to get people thinking about issues affecting the Black community, while also testing ideas about race and inequality.

In 2019, Mike starred and executive produced the Netflix docuseries “Trigger Warning with Killer Mike.” In it, he devises social experiments like creating his own utopian society or trying to shop exclusively at black-owned businesses to showcase the issues that the Black community continues to face.

Now, he’s turned his focus to banking. And his latest venture, a financial services company called Greenwood, was created as a response to economic injustice in Black and Latinx communities. The company is named after an area in Tulsa, Oklahoma that existed in the early 20th century and is more commonly known as Black Wall Street – which was destroyed by white mobs in what’s considered one of the worst acts of racial violence in America’s history. (Side note: This moment is also routinely left out of US history books.)

When the site launched last October, it received tens of thousands of account requests. And since the bank is digital it can reach communities around the US that do not have access to financial resources (think: lending, community reinvestment).

Cantave realized he could use AR to supplement Confederate and slaveholder monuments with those of Black heroes – including Serena Williams and Colin Kaepernick. Physical spaces don’t yet commemorate historical figures equitably. But Cantave’s using his vision – and technology – to provide a virtual space to fix that.

And it comes with an app. Middle school students and teachers can use the app to learn about Black history, and more specifically learn about people who are often not taught about in today’s curriculum.

“We wanted to make sure that we could make something that people, whether they’re in underserved communities or higher income, can access,” Cantave told The Hill. “We could make hundreds of monuments for the cost of what one monument could be and put them anywhere in any size with or without permission.”

“This is the beginning of a movement," Cantave added. "The real problem we’re trying to address here is how Black and brown history is addressed in our public spaces and public archives."

Black history is American history. And we cannot achieve a more equal society if we're only taught one side of the lesson.