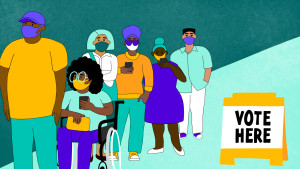 A year of racial protests and reckoning brought to the surface how deep rooted and pervasive systemic racism is in our country. And the urgency needed to change it. So this Black History Month, we're taking stock of the ways our current society still prevents Black Americans from gaining full equality. And the people and orgs fighting to change that.

Let’s take a step back first. In 1870, the 15th Amendment made it possible for Black men to cast their ballot. And in 1920, all women in the US were finally granted the right to vote. But that wasn't actually the case for many Black women. And Black people still faced major hurdles that prevented them from getting to the ballot box. Think: Black Codes, poll taxes, literacy tests, Jim Crow, or grandfather clauses.

It wasn’t until the passage of the Voting Rights Act of 1965 (95 years after the 15th Amendment was passed) that some of these barriers were outlawed. More so, the new act gave Black people the legal means to challenge the barriers they faced at the polls. And because of it, Black voter turnout (especially in the South) started to rise. But new voter suppression tactics – like repressive voter ID laws and racial gerrymandering – came to replace the old ones, and we still see them used today.

Across the US there are individuals and organizations that have been working behind the scenes fighting to make Black voices and voters heard. Here are just a few…

In the last two years, Abrams helped register more than 800,000 Georgian voters. And has gained national attention for her role in flipping GA’s senate seats blue. Part of her inspiration: loss.

In 2018, Abrams was defeated in a historic campaign for governor of GA against Brian Kemp (R). During her campaign, she witnessed voter suppression tactics in action (think: reduced number of polling places and a purge of millions of voters from the rolls).

But she didn’t let the loss stop her. Instead, she focused on her voting rights orgs New Georgia Project and Fair Fight. And narrowed in on getting underrepresented voters registered and to the polls. And they showed up. Now, she’s mulling a second run for governor in 2022. But with or without the title, she is considered to be one of the most influential figures in American politics today.

LaTosha Brown - Meets You Where You Are

LaTosha Brown, co-founder of the grass-roots org Black Voters Matter Fund (BVMF), is another major player when it comes to Black representation at the polls. Similar to Abrams, a spark was ignited in Brown after losing a 1998 election for State Board of Education in Alabama’s 5th district. She said the race was so close that it took seven days to announce the winner. Brown lost by a little more than 200 votes. Shortly after the results were certified, she was told that 800 ballots were found in a safe by the county’s sheriff. And that it was too late to have them counted.

Since then, she’s focused on voter suppression, registration, and policy advocacy (think: expanding voting access, strengthening the Voting Rights Act). And through BVMF she’s helped candidates like Alabama’s Doug Jones (D) beat his opponent Roy Moore (R) in the 2017 Senate race – in part by capturing 96% of the Black vote. The win made Jones the first Democrat to win a US Senate seat in the state in over 25 years.

After Jones’s unprecedented win, Brown started going on bus tours across the South to engage with Black voters everywhere, including rural neighborhoods. The bus has a massive slogan on the side that reads “WE GOT POWER.” And is labeled by BVMF as the “Blackest Bus in America.” Brown has gone on several tours across the nation, with the aim of listening and offering tools (like registering to vote) to the people she meets. Talk about making change on the go.

Rashad Robinson is the president of Color of Change (the nation’s largest racial justice org) and host of Voting While Black’s podcast. Robinson, who has led Color of Change since 2011, told Fast Company that he believes his mission is to create a new infrastructure for civil rights activism.

And that’s what Color of Change does. The digital org was created in 2005 by James Rucker and now-CNN host Van Jones in the aftermath of the government’s mishandling of Hurricane Katrina. It focuses on five main objectives: criminal justice, media representation, challenging right-wing politics, economic justice and voting freedom.

Just as important as representation at the polls is representation in government. Diversity on our bench and in our elected officials, allows our gov to better understand the people it governs. And to create laws that combat inequality in areas that may be overlooked (think: hospital policies and employment opportunities).

Representation on the bench gets us one step closer to creating a more fair and inclusive justice system. One state that's committing to doing that: Colorado. Beginning in 2019, the CO governor appointed five Black women to the bench – Judges Samorreyan Burney, Frances Johnson, Jill Dorancy, Nikea Bland and Pax Moultrie.

Frances Johnson expressed the importance of that to local NBC station KOAA, "It's hard to tell the community that the judiciary is fair and impartial, if when the community comes in front of the bench, they don't see the entire community reflected there. So, it's definitely a great start. There's more that needs to be done."

The bill looks to address the maternal death rate of Black women – who are dying at three times the rate of their white counterparts. It’s comprised of nine main bills and takes a 360-degree actionable approach to better understanding the crisis and funding solutions to save moms (think: health care coverage up to one year postpartum, more data collection to better understand the crisis, and funding for community-based orgs). But it's stalled in Congress. It was introduced just days before WHO officially declared COVID-19 a global pandemic, and has yet to be voted on.

Advocates are optimistic that the new Congress will take it up. But there’s another way to get this legislation off the ground: call your senators and representatives and demand that this act gets a vote.

On a local level, politicians are also working on ways of combating discriminatory practices. Like the Los Angeles County Board of Supervisors member and former State Senator Holly Mitchell. In 2019, she drafted the CROWN Act (Create a Respectful and Open Workplace for Natural Hair) to combat race-based hair discrimination. Think: denial of employment or educational opportunities because of hair texture or hairstyles like braids, locks, twists, or Bantu knots.

Mitchell was inspired by reports of a high school wrestler who was forced to cut his locs in order to compete. And another instance of an Alabama woman whose job offer was rescinded when she refused to cut her hair. The law (which was co-sponsored by DOVE after its 2019 study) unanimously passed in California, making it the first state to legally ban race-based hair discrimination in the workplace and public schools.

Several states followed suit (like New York and New Jersey). And in September 2020, the House passed the landmark CROWN Act. It will now move onto the Senate, which marks a historic next step to ending race-based hair discrimination nationwide.

The fight for equality is now. And while these activists and policy makers are setting the bar and paving the way, it's up to all of us to pick up the mantle and keep fighting.