The Aftermath of the Capitol Riots 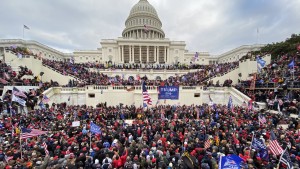 On Jan 6, as Congress gathered to certify then-President-elect Joe Biden’s electoral win, a mob of pro-Trump supporters stormed the US Capitol – scaling walls, shattering windows, breaking into federal offices, taking over the Senate floor, and stealing furniture. Videos show groups attacking the press and yelling an all-too-familiar message from then-President Trump: the media is the "enemy of the people." The attack on the Capitol left a handful of people dead and around 140 police officers injured.

The insurrection was the first major attack on the Capitol since 1814 – when the British burned it down during the War of 1812. Many blamed Trump, who for months rallied his supporters to believe that the election was rigged (despite evidence proving otherwise). He also made comments – both before and on Jan 6 – that were perceived as inciting violence (see: this and this).

Fast forward eight months, and pro-Trump protesters are still in action. On Sept 18, they’re planning to attend the “Justice for J6” rally in DC – which was organized by a former Trump campaign aide. The goal? Protest the treatment of those who’ve been arrested as a result of the Jan 6 insurrection – who some call “political prisoners.” The Department of Homeland Security is reportedly expecting about 700 people to attend – but that number could change. And the event is putting security officials, lawmakers, and many others on edge for what’s to come.

But that’s not all that’s gone down since the Jan 6 riots. Here’s what else has happened…

When it comes to law enforcement…

The US Capitol Police is in charge of protecting Congress, members of Congress, and congressional buildings and grounds. And while a number of officers were on the scene for the Jan 6 attack, the department has been accused of not being prepared enough to handle the events that unfolded. Video shows how close the mob of rioters got to then-VP Mike Pence, as well as some senators. The day after the attack, Capitol Police Chief Steven Sund resigned. Lawmakers called for investigations into security at the Capitol. And four officers who responded to the riot have since died by suicide.

One report from the Capitol Police internal watchdog found that the department was warned three days before the attack that Trump supporters were planning to target Congress – and that things could turn violent. The report also found that the Department of Homeland Security warned the agency that a map of the Capitol’s tunnel system was posted on pro-Trump message boards. It also stated that the department "did not have adequate policies and procedures" to respond to the insurrection.

On July 6, then-acting US Capitol Police Chief Yogananda Pittman announced changes that the agency is implementing, saying it’s worked “around the clock” to improve security and support officers. She said the recommendations are from a number of reviews of the attack from a number of entities, including a US Senate committee, House select committees, the Government Accountability Office, and others. That includes…

Pittman said that the department honors “all the brave men and women who, against all odds, faced down a violent crowd that day and protected our elected leaders and everyone who was in the Capitol Complex.”

On Sept 18 with the “Justice for J6” rally, the Capitol police will reportedly face its first major security test since the insurrection. The department is re-installing a fence around the Capitol that first went up after Jan 6. Capitol Police Chief J. Thomas Manger says that the force plans to remove the fence “soon after” the rally – as long as “everything goes well.”

Manger also briefed lawmakers on intel information and security preparations for the event. Though the public didn’t find out many details from the briefing, Senate Majority Leader Chuck Schumer (D-NY) said that security officials are “better prepared” than they were for the Jan 6 insurrection.

When it comes to arrests…

Federal prosecutors have said the Justice Department’s probe into the attack is “likely the most complex investigation ever prosecuted” by the dept. As of mid-September, more than 600 people have been charged in connection to the riot. And charges range from disorderly conduct to assaulting a federal law enforcement officer.

At least 50 defendants have pleaded guilty. And in June, Anna Morgan-Lloyd, a 49-year-old woman from Indiana, was the first person to be sentenced on charges related to the insurrection – she pleaded guilty to a single misdemeanor charge and got three years probation. Experts say the trend of zero time behind bars is likely to continue with other defendants, because many face charges for low-level crimes that may not result in jail or prison time.

But there’s still more work to be done. Officials are still searching for hundreds of suspects, including many who’ve been accused of attacking officers and journalists, as well as the person who planted pipe bombs at the DNC and RNC offices (the FBI is offering a $100K reward for more info on this person). A report from the Associated Press says there weren’t many arrests on the day of the attack because authorities prioritized clearing out the building – meaning they need to go back and try to track down suspects by sifting through footage and social media accounts. The FBI urges anyone who may know more about the potential suspects or who witnessed unlawful violence to report it to the bureau.

When it comes to Congress…

In June, senators released a bipartisan report that examined intelligence and security failures and offered recommendations. But they didn’t examine the causes of the attack.

In late May, the Senate blocked a bill to create a 9/11-style panel to investigate the riot (thanks to the filibuster). So in June, the House forged on and moved to create its own committee. The House committee has subpoena power and is made up of 13 lawmakers, including Republican Reps Liz Cheney (WY) and Adam Kinzinger (IL), who have both been critical of Trump’s rhetoric. The committee says it’s sifting through thousands of pages of documents from the federal gov, and has also requested records from social media and communication companies. It’s unclear when the committee could wrap up its investigation, and what could happen as a result of their findings.

Meanwhile, on July 6 (the six-month anniversary of the insurrection), President Biden said the attack "posed an existential crisis and a test of whether our democracy could survive." And called on people of all parties to work together to "restore decency, honor, and respect for the rule of law."

January 6, 2021, will go down as a dark day in American history. And months later, the slow-moving wheels of justice continue to turn as Americans wait to see what happens next. But the fire that’s fueling protesters’ flames still hasn’t gone out yet – and many Americans will be anxiously waiting to see what happens on Sept 18. Meanwhile, authorities are wading through one of the largest criminal investigations in American history – so it may be a while before all of the answers are on the table.

Updated on Sept 15 – Updated to include details on the Sept 18 "Justice for J6" rally.