Everyone Is Talking About AR-15s. Here's What You Need to Know About the Semi-Automatic Gun. 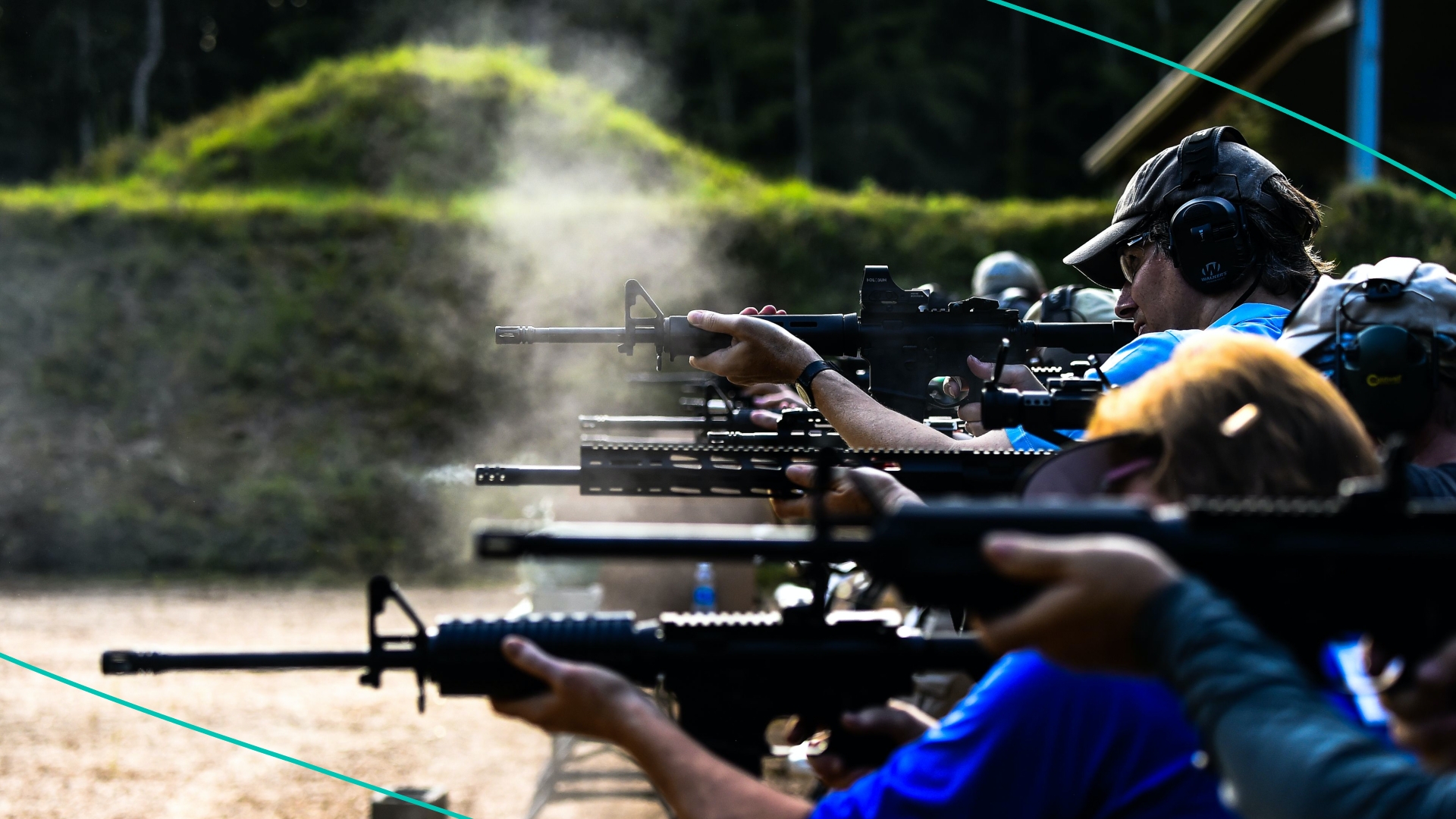 A movie theater in Aurora, CO. An elementary school in Newtown, CT. A nightclub in Orlando. A concert in Las Vegas. A church in Sutherland Springs, TX. A high school in Parkland, FL. A supermarket in Buffalo, NY. An elementary school in Uvalde, TX. And, most recently, a nightclub in Colorado Springs, CO. These mass shootings have all taken place within the past 11 years. Another thing they have in common: Versions of AR-15 semiautomatic guns were used during them. Or as the National Rifle Association calls it — “America’s Rifle,” which they estimate more than 11 million Americans own.

Over the past 20 years, more than 311,000 students have experienced gun violence in American classrooms — with school shootings hitting a two-decade high in the 2020-21 school year. But in recent years, sweeping action on gun violence in Congress has stalled. Despite gun violence becoming the leading cause of death for kids and teens in the US. And with the November 2022 shooting out of Colorado, many still have questions about the semi-automatic gun that's taken so many innocent lives. Including how long it’s been around and whether it will be banned in the future.

The AR-15 got its name in the 1950s from the small California company that made it — ArmaLite. (So no, 'AR' does not stand for automatic or assault rifle.) But it wasn't until the ‘60s, when Colt bought the gun’s patent, that it started to gain traction. They created a military version of the weapon — the M16 — which became the standard weapon used during the Vietnam War.

Given its success with the military, Colt started marketing a civilian version of the AR-15 to the public. It was known for being lightweight, adaptable, easy to modify, and rapid fire. But over the years, other companies like Remington, Smith & Wesson developed other variations of the weapon. And while those businesses gave the guns their own names, the AR-15’s popularity stuck. And became the go-to nickname for those types of rifles.

Because they’re semi-automatic, someone has to pull the trigger to fire each shot. Since an automatic version was initially designed for the military, the AR was created with speed in mind. Making it easy to quickly reload and shoot a target.

It can also be easily customized by adding scopes, lasers and other things — like a bump stock. That attachment was used in 2017 by the gunman responsible for the Las Vegas mass shooting. It essentially turns a semi-automatic rifle into an automatic one by letting the user fire shots at a faster pace. Bump stocks were outlawed about a year after the Las Vegas shooting.

For starters, it's embedded in America’s culture. And is often tied to freedom and patriotism by gun enthusiasts. But it's also the most popular sporting rifle, according to the US National Shooting Sports Foundation, because of its “accuracy, reliability, ruggedness and versatility.” Making it popular in activities like hunting and target shooting.

Plus, they’re pretty easy to build. You just need the gun’s lower receiver (aka the firing mechanism and magazine). Then there are countless options for customization — including different barrels, grips, stocks, etc. So owners can personalize the weapon how they like, depending on the purpose.

Has the weapon always been allowed?

Nope. In 1994, President Bill Clinton signed a law that included an AR-15 ban. The law made it illegal to manufacture or sell certain semi-automatic weapons. But it was filled with loopholes — allowing companies to create copycat models that bypassed the ban. And it came with an expiration date — in 2004. When the bill was up for renewal, America was dealing with the fallout of the 9/11 attacks and the Iraq War. The Republican-led Congress at the time chose not to renew.

When the bill was up for renewal America was dealing with the fallout of the 9/11 attacks and the Iraq War. The Republican-led Congress at the time chose not to renew.

Now, depending on the state you live, getting an AR-15 can be pretty easy. Examples: In Florida, anyone 21 and older with a clean record can buy one. And Texas, where anyone can buy an AR-15 rifle once they turn 18. (Which the gunman in the Uvalde, TX shooting did.) But some states like Connecticut, Illinois, and New Jersey don’t allow certain AR-style guns.

Will any new gun laws ban AR-15s on the federal level?

Like Clinton, President Biden has been trying to implement an AR-15 ban too. In 2022, legislation banning assault rifles (including AR-15s) made it through the House. But, the ban didn’t make it past the Senate. But that hasn't deterred Biden: Following the Colorado shooting in November, he said the fact that the US still allows the purchase of semi-automatic weapons is "sick." And that "we need to enact an assault weapons ban to get weapons of war off America’s streets."

Making matters complicated: A divided federal government. The 2022 midterms led to a Democratic-led Senate and a Republican-led House. Unless the chambers can come to an agreement on this — which seems unlikely — don't expect a federal AR-15 ban again anytime soon.

Are AR-15s legal in other countries?

Semi-automatic rifles are restricted or prohibited in most other wealthy nations. In Canada, semi-automatic rifles are restricted to certain uses. And in Australia, those types of guns are banned. The US is one of very few countries that has the right to bear arms in its Constitution. And there are more guns than people in the United States. The exact number is hard to nail down. But a Small Arms Survey estimates there are more than 393 million civilian-owned firearms in the US (compared to the population of around 326 million).

Can gun companies be held accountable when AR-15s are used in mass shootings?

It’s complicated. Gun manufacturers can be sued. But they have legal protections that shield them from most lawsuits. Like the 2005 Protection of Lawful Commerce in Arms Act, which says gun manufacturers aren’t liable for crimes resulting from their products. Learn more about the ins and outs here.

In the '60s AR-15s were first designed for military combat. Since then, they've become one of the most popular weapons among civilians. And have also been used to carry out some of America's most deadly mass shootings. Now, the country is yet again debating whether banning these semi-automatic weapons can save lives. But given Congress' lack of action on the issue in the past, many are skeptical that change is on the horizon.

Updated Jan. 18 to include the latest information.