Labor Unions: How They Work and Why There’s An Uptick in Labor Strikes 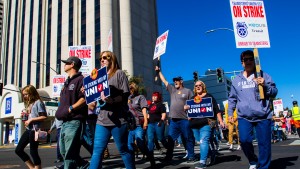 Throughout the COVID-19 pandemic, more and more US workers have questioned whether they’re getting enough bang for their buck when it comes to how they’re treated in the workplace. So far, 2021 has been a big year for workers attempting to unionize, as well as going on strike, as they reassess their priorities at work. And while labor unions aren’t anything new, they’re gaining steam as the pandemic rages on.

They Go Waaay Back: The History of Labor Unions in the US

Labor unions are groups of workers that band together on work-related decisions (think: hours, wages, benefits) through collective bargaining. Members pay dues that go towards things like representation, political campaigns, and paying union leaders and staff. Union reps negotiate with employers on their members’ behalf. The idea dates back as far as the 1700s, when printers in New York joined forces to ask for a wage increase. But unions didn’t really pick up steam until after the Civil War, when the US started to industrialize.

Enter: the Industrial Revolution. The uptick in mass production meant more jobs. And an influx of immigrants coming to the US meant more people willing to take on those jobs. These circumstances created a power gap between employees and their bosses, who could get away with paying workers low wages and forcing them to work long hours. But workers started to fight back — through labor organizations. In 1935, President Roosevelt signed the National Labor Relations Act (aka the Wagner Act), establishing the right to join a union, go on strike, and collectively bargain (though it’s still illegal for federal workers to strike).

While the numbers may seem low, there are still millions of Americans who are part of one. And unions appear to have an advantage when it comes to pay. In 2019, data from the Bureau of Labor Statistics from 2019 shows that nonunion workers make less than union workers (specifically, they earned 81 cents to union workers’ $1). Fast forward to the COVID-19 pandemic, and unions are once again in the spotlight. Especially as workers from all sectors weigh the importance of fair wages, benefits, and work conditions.

COVID-19 and Its Impact on Labor Unions and Strikes

Organized labor has been making headlines this year. Including workers at two companies who have made attempts to unionize. See:

But the hype hasn’t just been around forming unions. Enter: labor strikes – which date back as far as the 1880s. But there have been a number of them throughout the country this year (we see you, Striketober). Cornell’s Labor Action Tracker found that there’ve been at least 175 union strikes so far this year. That includes a number of big-name companies like John Deere, Kellogg, and Volvo. Plus, Hollywood was about to see a strike with 60,000 production workers – until a deal was averted at the last minute in October.

A variety of issues have caused strikes throughout the pandemic – including better wages (sometimes to reflect inflation or a company’s increased profits) and safeguards over the coronavirus. The president of AFL-CIO – a federation of dozens of unions – told the Washington Post that “the strikes are sending a signal...that employers ignore workers at their peril.” And these workers have gotten leverage to demand more, because of…

Union workers and experts are watching to see how labor unions play out under the Biden administration. President Biden has said he intends to be “the most pro-union President leading the most pro-union administration in American history.” He also tapped former Boston Mayor Marty Walsh – a former union leader – to become his labor secretary. In mid-October, Walsh and VP Kamala Harris are expected to announce measures to encourage federal workers to join unions. Meanwhile, Biden has publicly supported the Amazon workers union drive in Alabama, as well as the John Deere employees who went on strike in October. As Bloomberg puts it: “For the first time in awhile, unions feel like Washington is on their side.”

The labor movement has helped give employees a voice, establish higher work standards, and provide economic mobility for the middle class. Pew Research found that more than half of Americans think the decline of union memberships is bad news for the US and workers. But the COVID-19 pandemic has created a spark in organized labor. And now, the question is whether unions can gain their influence back.